January 16, 2018
Martin Luther King Day dawned on Monday with Washington politicians and the media focused on Donald Trump's "shithole" slur: yet another of his despicable comments. This isn't the first time the country has been led by a racist, but still... having Trump as the immediate successor to our first black president has shocked a lot of us. 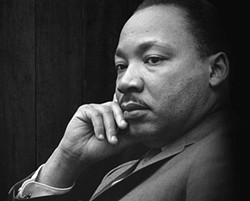 Maybe it shouldn't have, though. Racism is rampant in the United States, and not just in the hearts and minds and utterances and policies of the rednecks of the red states.

White people and people of color alike have condemned Trump's remarks. But black journalists, commenting on both Trump and King, brought a perspective that should be required reading for white Americans – on the left as well as the right.

Andre Perry at the Brookings Institution pointed to journalists and others who say it's time to call Trump the racist that he is. "I agree," Perry wrote. "Trump is a racist."

"Trump’s words have revealed his character," Perry wrote. "However, it’s what’s not being said by others that’s bothering me. There are major organizations and people who are relegating themselves as bystanders of oppression, having offered no public statements (not even a tweet) condemning any of the President’s racist and sexist behaviors."

"Therefore," said Perry, "on this year’s MLK Day, in observation of the 50th anniversary of his assassination, I’m not investing too much energy into Trump. And I’m no longer interested in hearing voices who state the obvious about Trump. I am, however, listening for institutional silence, wherever it might originate. Too many stand in silence and complicity as Trump abuses the office of the presidency with the weapons of bigotry and divisiveness."

At the Washington Post, DeNeen Brown focused on Martin Luther King's "Letter From a Birmingham Jail." Writing on scraps of paper in his jail cell, King lashed out at white moderate ministers who professed to agree with his goals but disagreed with his actions, which, they said, were "untimely."

"We know through painful experience," King wrote, "that freedom is never voluntarily given by the oppressor; it must be demanded by the oppressed. Frankly, I have yet to engage in a direct action campaign that was 'well timed' in the view of those who have not suffered unduly from the disease of segregation."

"I have almost reached the regrettable conclusion," King said, "that the Negro’s great stumbling block in his stride toward freedom is not the White Citizen’s Council-er or the Ku Klux Klanner, but the white moderate, who is more devoted to “order” than to justice...."

The day before that commentary in the Post, DeNeen Brown had written about King's relationship with Malcolm X, and she quoted Malcolm X's comments about King's March on Washington:


“Yes, I was there,” he wrote. “I observed that circus. Who ever heard of angry revolutionists all harmonizing ‘We Shall Overcome. . .Suum Day. . .’ while tripping and swaying along arm-in-arm with the very people they were supposed to be angrily revolting against? Who ever heard of angry revolutionists swinging their bare feet together with their oppressor in lily-pad park pools, with gospels and guitars and ‘I Have A Dream’ speeches? And the black masses in America were –and still are – having a nightmare.”

The Martin Luther King we celebrated on Monday was considered radical and dangerous when he was alive. And I don't know that the general public attitude would be any different if he were leading protests today. (The hostility toward black athletes kneeling during the National Anthem certainly didn't inspire hope.)

"America has to think long and hard about whether it wants something different," Lamar said.