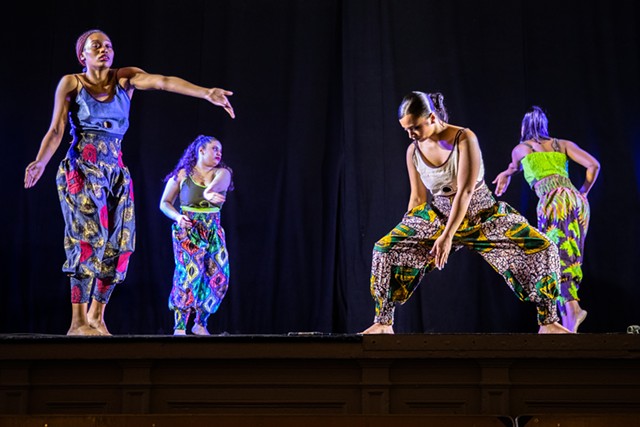 Wearing a modern take on traditional garments, Neyda Colón Di Maria took the stage at Harro East Bal lroom recently to kick off Borinquen Dance Theatre’s 40th anniversary celebration and fundraiser. She stomped and writhed to drumbeats as a prayer song told the Taino-Arawak story of the civilization and colonization of Boricua, which is now called Puerto Rico.

Groups of dancers presented Afro-Caribbean styles set to pulsing music that got some audience members on their feet.

Later, MaKayla Santiago presented a Flamenco number, clomping and clapping in time with a Spanish guitar, and dramatically waving her hands, dazzling sequined skirt, and tassel-edged shawl to complement the rise and fall of impassioned vocals. This dance, and all of the others presented that night, together form a picture of Puerto Rican culture, which combines elements of Indigenous, African, and Spanish cultures.

That same evening Santiago was awarded a $1,000 scholarship from Borinquen alum Dr. Mirna Lis Martinez, to help pay for her studies at Rochester Institute of Technology that begin in January. 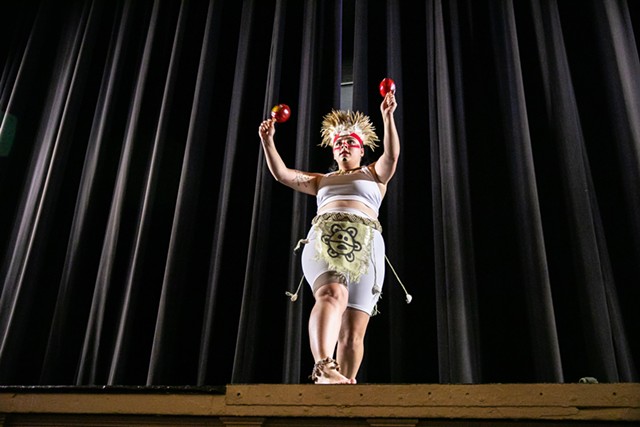 Nydia Padilla-Rodriquez, the founder of Borinquen Dance, says it is common for people who have been part of the company to help young dancers. The organization, she says, has fostered a community in Rochester that is like a family.

“They always come back in a way where it's just amazing, because they still want to be part of what we're doing,” she says. “And they really believe that we're like an extended family.”

FROM EXERCISE TO OUTREACH

She recalls it as a somewhat of a surprise announcement — even to her. But that push led to creating a tight-knit, diverse community of adults and youth who aimed to stay active while learning about Puerto Rican culture.

That quickly evolved into a successful outreach program for at-risk children and young adults that instilled cultural pride, a strong sense of self and capability, and discipline, leadership and teamwork skills applicable to other areas of their lives. 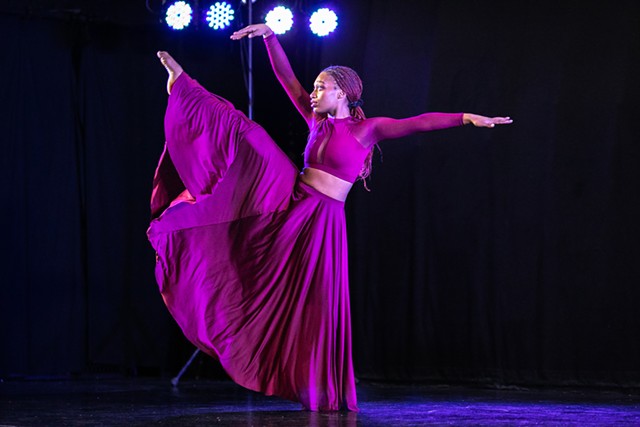 Borinquen alum Ingrid González, 40, was involved with the company from ages 16 to 21, and again from age 27 to 30. She says she joined because she had stopped participating in color guard, but wanted to stay active. A cousin was a dancer with Borinquen, so she tried it out. It quickly became more than exercise, she says.

“The impact that Borinquen gave me was discipline,” González says. “Things were, you know, very strict. Of course, we had fun. But we had a set schedule, a routine: attire, hair, makeup. The discipline part was great at a young age.”

She also took on leadership roles, she says, helping teach the younger girls’ classes and assisting Padilla-Rodriguez in other ways that taught her teamwork skills.

Padilla-Rodriguez also learned leadership and teamwork at an early age.

She was just 16 when she became the youngest original company member of what would become Garth Fagan Dance, back when it was called Bottom of the Bucket, But…. When she later founded Borinquen, she was still in college, studying dance and earning her teaching certification at The College at Brockport. 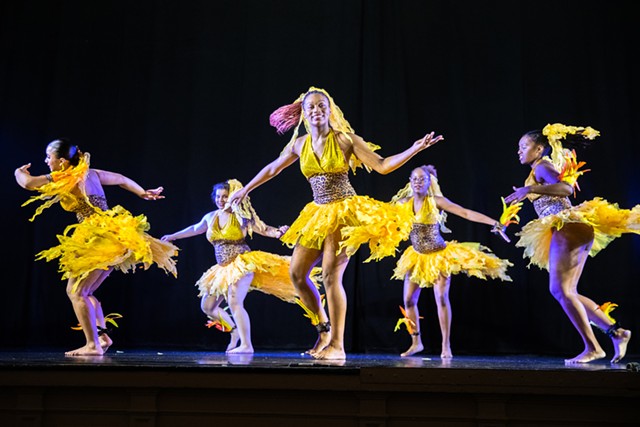 “We just kind of lose the kids that may come from a family of poverty, but that doesn't necessarily mean that they don't have the desire or the interest to be successful,” she says.

And the company’s educational target soon expanded beyond its students.

"Borinquen is one way to educate the community about who we are as a people, and not feel threatened or intimidated by it, but embrace the diversity that truly makes America rich," she says.

Thousands of people have been part of Borinquen Dance Theatre over the years.

Padilla-Rodriguez estimates that the company works with 75 to 100 students each year, operating from its home at the Hochstein School. When transportation becomes an obstacle for some students, Borinquen has been known to set up programs in some of their schools.

Padilla-Rodriguez works to educate her students about Puerto Rican culture’s rich complexity of Taino, African, and Spanish ancestry, and how that heritage is embedded in the dances and the music they are learning. They understand that the costumes, music, and movements are ripe in symbolism.

She expects her students to show up and challenge themselves. Utterances of “I can’t” are met with a dismissal from the room until the attitude changes to “I’ll get this.” Students who shine get to choreograph dances and assist in teaching. Classes may transition into employment opportunities.

Borinquen performances are an integral part of National Hispanic Heritage Month each October, when cultural organizations in Rochester explore and present various Hispanic and Latinx experiences. But the organization’s reach in the Latinx community goes far beyond the events of that month. Borinquen dancers participate in showcases all over Rochester and western New York. 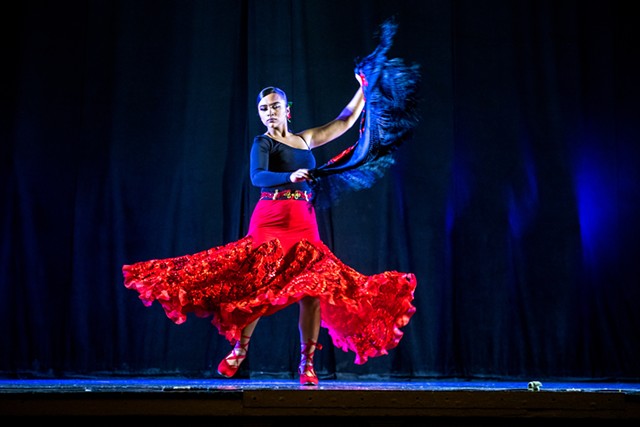 All that effort takes resources, and with a relatively small operational budget of $100,000, Padilla-Rodriguez says Borinquen relies on volunteers, grants, and fundraisers, like the anniversary celebration.

At the event, guests bid on dozens of silent auction items and packages donated by local arts and cultural organizations and small businesses. Items ranged from a $40 scarf and mask set to a gold and diamond ring valued at $3,150. The auction raised $5,501 for Borinquen.

Toward the end of the evening, when the emcee Marisol Ramos-López honored Borinquen founder Nydia Padilla-Rodriguez, it was also announced that Padilla-Rodriguez’s mentor Garth Fagan, who was in attendance, would donate $10,000 to Borinquen to help ensure its future.

After the event, Padilla-Rodriguez said that she felt heartened about the organization’s ability to keep doing its work.

But the company wasn’t always so financially secure.

“I will admit that in 40 years, we've had our challenges, we've had our ups and downs,” Padilla-Rodriguez says. “But overall, we've always had the ability to overcome these challenges and to continue building BDT in a way where it's really an asset to the community not only in Rochester but outside of Rochester.”

She recalls an instance when, about a decade into the company’s founding, it was financially struggling. She says she was filled with despair and resolved to call it quits.

“When I made that announcement, the next day a student came to class and she gave me a letter,” Padilla-Rodriguez says. “She wrote the letter in Spanish and in English because she wanted to make sure I understood, telling me, ‘You can't do this to us. People have failed us for such a long time. We're dealing with violence. We're dealing with drug issues, we're dealing with so much, and this has been a safe haven for me.’ I mean, the way she wrote that letter, it put me to tears. And that's when I said, ‘I can't give up.’”

Rebecca Rafferty is CITY's life editor, and can be reached at becca@rochester-citynews.com.