PHOTO PROVIDED Marge's Lakeside Inn, with its beach chairs and sand beckoning bare feet, feels much more exotic than the shore of a Great Lake. Key West exotic. Caribbean-island exotic, even.
Aside from the red, white, and blue sign out front, Marge’s Lakeside Inn looks like any other beach house lining the street on the northernmost stretch of Culver Road in Irondequoit.

But visitors who stroll up the concrete stairs rising from the sidewalk will see a cozy outdoor patio with a fire pit in the shadow of a sprawling tree. If they make their way through the door, they’ll find a tiny dark interior awash in Tiki décor, dried starfish trapped in nets, and photos on the walls. So many photos. The jukebox is a time machine of the Beach Boys, Jimmy Buffett and vintage pop. Past the mirrored beer signs, down a short hall, they come to the back porch.

“And then they come out here,” says Francine Beth, the longtime owner of Marge’s, gazing at the vista of the vast expanse of blue that is Lake Ontario.

To the uninitiated and geographically-challenged patrons who ask if they’re looking at an ocean, Beth coyly tells them, “Yesss.”

The vibe, with beach chairs and sand beckoning bare feet, feels much more exotic than the shore of a Great Lake. Key West exotic. Caribbean-island exotic, even.

The sunsets are generally quite marvelous. Perhaps they always are. But we never really notice until we take the time to actually study one, do we?

Sometimes the live music is original, but mostly cover bands dominate. The oxymoron duo of Jumbo Shrimp plays a couple of times a month. Strangely fitting in with the celebratory mood of this beach scene is Watkins & the Rapiers’ and its “Xmas in July,” a fixture show at Marge’s this time of year in which the Rochester band plays a set of sardonic, sometimes sentimental, Christmas songs.

When it performs on July 7, the band will debut two new works: “No Summer Break for Santa Claus” and “Christmas in July.” The latter is the second Watkins song of that title. The band may be running out of options. Over the years, Watkins & the Rapiers has written 99 Christmas songs.

As best the band can determine — and there’s no reason to believe that anyone else would engage in such an endeavor — this appears to be the largest collection of Christmas songs ever written by a single man, band or beast. (One of the band’s songwriters is Scott Regan, who hosts the radio program “Open Tunings” on WXXI, the parent company of CITY.)

Such unorthodoxy fits the long arc of history that is Marge’s Lakeside Inn. Its very foundation has been threatened by Lake Ontario’s spring floods, its neighbors treated — whether they like it or not — to local musicians such as Dave Turner setting John Denver’s “Country Roads” to an island beat.

“I don’t know how I got here,” Beth says, even though she knows the story well enough, since she’s been a central part of it.

The building dates back to the 1930s. During Prohibition, it hosted an illicit speakeasy that secretly brought in booze from Canada. The owner then, George Magin, brewed beer in the basement.

But it was 62 years ago that Marge’s as we know it today was born. That’s when Marge Beth bought the place.

She ran her namesake bar with her son, Ron. Her other son, Gerry, played piano there. Gerry “Fingers” Beth was a familiar presence in the city for decades, playing clubs with a large gay following, such as Bullwinkle’s on Lake Avenue and Tara on Liberty Pole Way, which is now Abilene Bar & Lounge.

Ron Beth bought Marge’s Lakeside Inn from his mother in 1975, and ran it until he died of cancer 11 years later.

It’s the family business. A cadre of regulars fills out that family tree, one that Beth likens to a Charlie Brown Christmas tree. That means there are some broken branches.

“So our customers aren’t customers, they’re family,” she says. “And that’s how we live, and that’s why all the pictures, and why I get so emotional, with customers who pass, or do great things. That’s the Marge vibe.”

Many of the photos on the walls of Marge’s are from the yearly trips, organized by the bar, to Caribbean islands.

Tim Wagner is on those walls. Among Marge’s regulars, Wagner stood out. A big man with a big personality, he died in February. The bar waited until the June weather to throw a beach party in his honor.

Maeve Mac An Tuile, who lives a few houses down the beach from Marge’s, recalls a Halloween party a few years ago at the bar. Wagner showed up dressed in a vintage golf outfit: jodhpurs, a sharp pair of spats over his shoes.

“Beautiful, he was handsome, very gorgeous,” Mac An Tuile says of Wagner.
And Beth? Her costume was a giant loofah sponge.

But something was amiss. Wagner and Beth decided they had to switch costumes.
“Francine looked so cute in that golf outfit,” Mac An Tuile says. 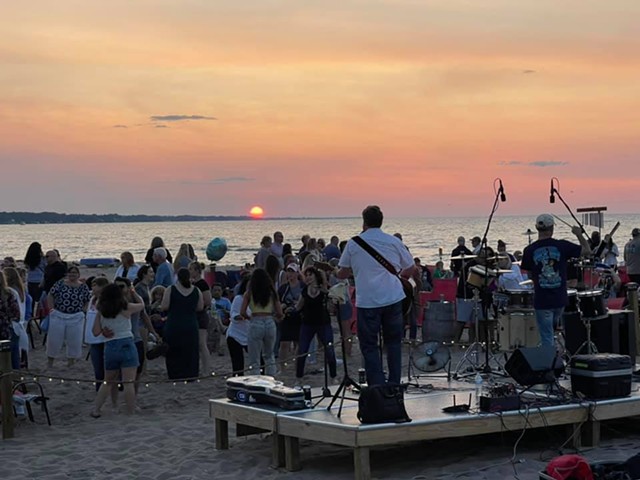 And Wagner? Wearing a huge tutu, flip flips and holding a sponge brush?

“It was like, meant to be,” Mac An Tuile says. “They had the wrong costumes from the beginning, so they knew they had to switch.”

On a summer evening last month, with some of his friends wearing the jaunty style of captain’s hat frequently worn by Wagner, the Marge’s crowd celebrated his life by setting adrift on Lake Ontario a fleet of candles mounted in paper bags.

In this remembrance of Wagner, Beth thought of where she is now. And she recalled the loss that led to her becoming the third generation behind the bar at Marge’s.

Beth began to cry a little, just as her friends called her away to another place in the tavern, where there was a party going on.

Jeff Spevak is WXXI’s Arts and Life editor. He can be reached at jspevak@wxxi.org.