May 26, 2020
During this time of precautionary self-quarantines, coordinated group performances on Acapella, Zoom, and other video apps and virtual meeting software — whether they involve a five-piece rock band or a chorus of seemingly infinite singers — almost invariably result in static concert vibes. Even with the music properly mixed, each musician is confined to his or her little box within the grid, and the sense of dynamic interplay between performers can be lost.

Enter Marc Webster, the Rochester-based recording engineer, composer, and pianist behind Blue on Blue Recording Studio. A frequent collaborator of the local contemporary classical quintet fivebyfive, Webster already had a reputation for presenting classical instrumentation in innovative packages prior to the COVID-19 pandemic. From the ingenious mashup of hip-hop and classical idioms to the use of classic rock production techniques, Webster produces videos that place chamber music within the fresh context of the modern recording studio.


Now, with a new recording and music video for the Marc Mellits composition “Platter of Discontent: I. The Seduction of Brie,” Webster has managed to retain the feel of a crisply edited, in-studio collaboration despite the hindrance of physical distancing. Clocking in at a fleeting two minutes and 17 seconds, the video, premiered on Zoom on May 23, answered a new question for Webster: “How do we do a video when we’re all kind of stuck in our homes?”

Webster enlisted the help of some talented instrumentalist friends — Rochester Philharmonic Orchestra cellist Lars Kirvan, Eastman School of Music alumnus Shannon Reilly, The Rita Collective’s Kristen Shiner McGuire on marimba, and flutist Laura Lentz and bass clarinetist Marcy Bacon of fivebyfive. The Blue on Blue producer, who also plays piano in “The Seduction of Brie,” relied on self-shot videos provided by each of the musicians as they played to a click track. He then placed each of the six video panels alongside one another, hovering above a virtual stage that resembles a circular reflecting pool surrounded by sheet music. This setting gives the video a sense of depth it wouldn’t otherwise have, avoiding the visual flatness from which digital video content suffers. 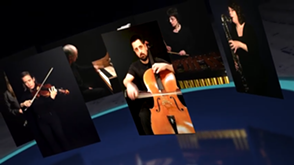 Despite and perhaps inspired by the constrictions of COVID-induced isolation, Webster has succeeded in creating his first three-dimensional video, complete with 360-degree perspectives, sudden close-ups and quick pans, and even the dynamic movement of individual video panels. All these techniques serve to underscore the energy of the players, the propulsive, unpredictable rhythms of Mellits’s mixed-meter composition, and the shared intimacy of joint music-making. It’s enough to make the viewer forget that the six performers were never in the same room together.

As interpreted by Webster, “The Seduction of Brie” proves to be complex and rich enough to satisfy classical music nerds, and concise and topical enough to engage with Instagram audiences.