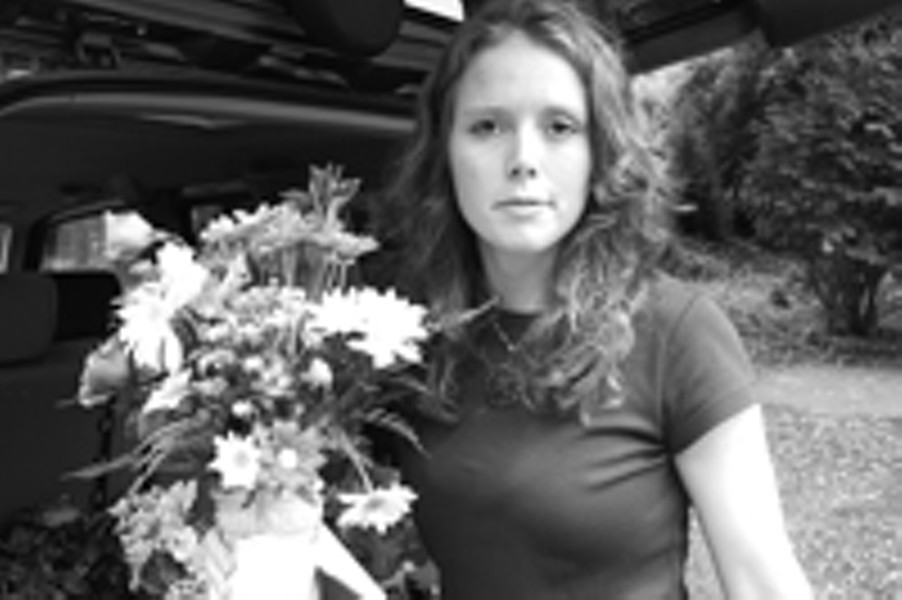 Kara Doughman Heather Layton: Trying to push beyond the statistics.

When Heather Layton read that Rochester had become the murder capital of the state, her first reaction was grief, she says. Then she felt guilt and embarrassment.

"I was a little uncomfortable that I had only heard of about six of them on the news, but I had no idea that we had this many," says Layton, a multi-media artist and visiting professor of art at the University of Rochester. "And how could I not know this?"

Layton noticed that the 54 murders in the city seemed to have received little attention in the suburbs where she and her husband live.

"I think it is very easy to see the statistics and not become engaged," she says. "I wanted to know what we would do if this was happening on our streets. How would we react?"

So Layton took her question to suburban streets, front yards, mall parking lots, and country-club greens in a performance piece she calls "(Sub)Urban Homicide." She started with a map of Rochester, on which she marked the locations of each murder. Nearly all of had occurred within the inner city. She then placed tracing paper over the map, and traced the locations. And when she turned the tracing paper as if she were turning a page in a book, the locations on the tracing paper placed the murders sites in the southeast suburbs.

Once she identified the suburban addresses, Layton obtained police reports filed on each victim so she could learn about the person. Most were young black men killed with handguns, but there were young women and children, too. Layton created a personalized card with the victims' names, photos, and how they died. The card and a flower arrangement became memorials for each victim.

So far, she has placed memorials at 20 locations, including the parking lot at the Pittsford Wegmans, the NazarethCollege campus, and on the lawns of private homes along Highland and East Avenues.

The first address was the home of one of Layton's colleagues.

"At first, I thought it was a coincidence," she says. "Then one landed in a friend's yard and another in a place where I shop, and it became really clear that these people could have known each other and people in that community knew them --- they are clustered that close together."

Reactions to Layton's project have been mostly positive.

Layton says cynics might look at what she is doing and think: Here's a pretty white lady from the suburbs trying to relieve her guilt.

"It's perfectly valid criticism," she says. "I completely understand that argument. And I am out here going onto these sites with my red hair and freckles, so people don't seem too alarmed. But I think if I was a 20 year-old black male, it would be different."

Layton says the flowers would have cost her about $7,000 so far, but the owners of the Penfield Flower Shop have sold her the arrangements at reduced rates when they learned about the project. She has chronicled each memorial and is planning to create a photo exhibit. She hopes to display (Sub)Urban Homicide in Rochester, Buffalo, Syracuse, and New York City in the coming year.