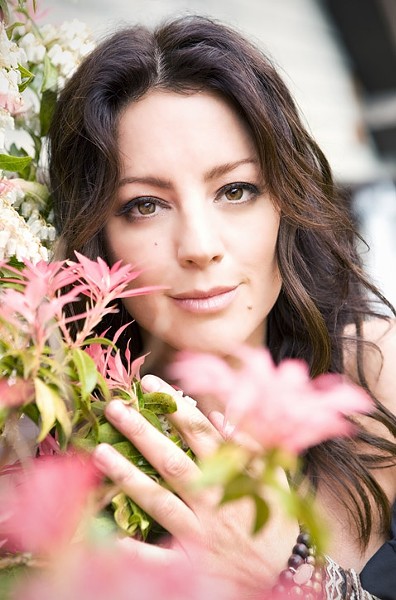 "The way to pull something off like this is to do your homework before you get on the stage and to hire great symphonies. These [orchestras] are all A-list players that are used to sight reading and playing things right the first time. It's not a typical rehearsal schedule."

So says Sean McLoughlin, the conductor and arranger for the upcoming tour of pop star Sarah McLachlan, which comes to the Marvin Sands Performing Arts Center (CMAC) on Tuesday, June 26. McLachlan's 2012 symphony tour opens June 22 in Toronto and travels through 13 locations in three weeks. McLachlan hired the Rochester Philharmonic Orchestra to share the stage for the CMAC concert.

McLoughlin (the conductor/arranger) got his first chance to work with McLachlan (the singer/songwriter) in 2011, when McLachlan was scheduled to perform a concert with the Hollywood Bowl Orchestra, with which McLoughlin has been involved for several years. Both McLoughlin and six-time Grammy award winning arranger Vince Mendoza created arrangements that McLachlan performed in four concerts in 2011, and McLoughlin also conducted McLachlan in concert in Ottawa.

"Nothing is worse than having a real lame arrangement," says McLoughlin. "I try to keep in mind both of those worlds [of classical and pop] and take it to a very high level."

For McLoughlin there's a very real challenge associated with his current work. Among the McLachlan songs fans can look forward to for the CMAC concert are "Sweet Surrender" and "World on Fire" — mega hits the audience is sure to know, and know well. McLachlan has sold more than 40 million albums worldwide, won two Grammy Awards, four Juno Awards (Canadian music awards), founded the Lilith Fair to showcase female musicians, and launched a nonprofit music school. Her fans have very real expectations.

"Sarah had a permanent smile after the first time we played through these arrangements last year. I have no doubt the audience will feel the same," says McLoughlin. "You'll experience Sarah's songs in new ways. Especially for longtime Sarah fans, it will be like hearing it for the first time, all over again."

McLoughlin's career is definitive as a crossover conductor/composer/arranger, taking him everywhere from the orchestral podium to the concert tour bus. Originally from Syracuse, McLoughlin earned his bachelor's degree in music education and composition from Syracuse University in 1995, and his master's degree in music composition from the New England Conservatory of Music in 1997.

After graduation, he tapped a few contacts, moved to Los Angeles, and started pounding the pavement, working from the ground up. McLoughlin says that he's "not quite sure how it all happened," but he found a way to merge his classical training with popular music.

McLoughlin has since worked with country star Martina McBride and the Boston Pops, as well as joint performances with jazz singer Diana Krall and classical violinist Itzhak Perlman. He's also worked for music icons from Adele to Natalie Merchant to Cheap Trick.

Essentially, McLoughlin's day job has him surrounded with some of the top musical artists on the planet, allowing him to stretch his own talents. "I try to write engaging arrangements, so it's not just instruments holding notes while the singer is singing. I'm reimagining what that song can sound like with all the possibilities that a classically trained orchestra has to offer," says McLoughlin.

McLoughlin takes an approach to arranging that draws from the history of classical music. "If it is a slower, more somber song, then I apply dark scoring typical of Mahler or the Russian masters like Tchaikovsky and Rimsky-Korsakov," says McLoughlin. "For a lighter song, I will draw upon the scoring of Copland or something along those lines. For a mix of both, I gravitate toward the French style, like Ravel and Debussy."

He also draws from modern rock and pop examples of artists with orchestral creations, like The Beatles or the Moody Blues.

McLoughlin explained that a concert such as McLachlan's begins with MP3 recordings of works an artist wants to have arranged for a particular concert, tour, or setting. The recording is often live, and he often starts by creating a written score from the sound recording of the live performance. McLoughlin uses Finale computer software to create the score and then his arrangement. He then uses the program to generate an electronic sound recording of the arrangement to transmit back to the artist.

"I talked to [McLachlan] at length about reinventing some of her songs, about conforming orchestral parts around how she sings, her passion, and her sensitivity," says McLoughlin. "She was not a passive collaborator; she was very active in the process. In some cases she asked about converting a line from the piano to the oboe. [McLachlan] loves the sound quality of the oboe — its somber, sweet longing — so sometimes the arrangement pares down to a soaring oboe on top of the strings."

In some ways, McLoughlin's work draws the essential elements from great works of music, and uses them as a launching point, much the same way writers might start with a quote from another writer.

"I start by mapping out each song with the vocal line and chords," says McLoughlin. "Then, I drop in elements like bass line and some initial counter-melody ideas I may have. Then I dig in and work through each section."

McLoughlin is not impervious that the arc of his crossover career is also a reflection of the current growing pains within the classical-music industry. "The options seem to diminish with each passing year," says McLoughlin, well aware of the 2011 collapse of the Syracuse Symphony Orchestra. "As long as I'm working on music — no matter what it is — it's a positive thing. To think you're going to get hired as a court composer like Mozart is a thing of the past."

"This is art at its highest level," says McLoughlin. "When I was approached by Sarah's management to do this, I jumped. This is just as important as a Mahler or a John Adams symphony, and it's performing with players of the highest caliber in a great setting. If it happens to merge pop with a classical symphony, it's still at the highest level. I don't dumb it down just because the two genres are otherwise clashing."