Our bodies serve as our fragile interface with the world. It's how we manifest our intentions; it bears the scrutiny of ourselves and others; it's one important means by which we relate to and connect with one another. And it's also often a politically-charged battleground. The current show at Main Street Arts, "The Human Figure," takes all of this into consideration while acknowledging the ages-old tradition of artwork devoted to the human form.

Birmingham, Alabama-based artist Steven Romeo's large-scale photograph, "Ally," is part of his "Beyond the Binary" series. This work is a portrait of a nude person who presents traits that we assign to both masculine and feminine identities. The figure seems biologically male, with sculpted musculature that is highlighted by the precariously held pose while balancing on one high-heeled foot. One arm extends downward to grip the other shoe's heel, holding the leg in a bent position that conceals genitalia. The figure wears makeup and looks out at the viewer with an orchestrated balance of demure and come-hither body language.

According to Romeo's statement, this oeuvre is "an exploration into the lives and bodies of genderqueer and gender non-conforming individuals living in the United States." Subtly, Romeo confronts the viewer with the question of assigning a category to the subject: is it the viewer's right to assign an identity?

I'm grateful for the inclusion of Romeo's work in the show. "Ally" not only challenged me to wrestle with the constricting language and assumptions that we take for granted, it also provided an unexpected lens for viewing the rest of the show. 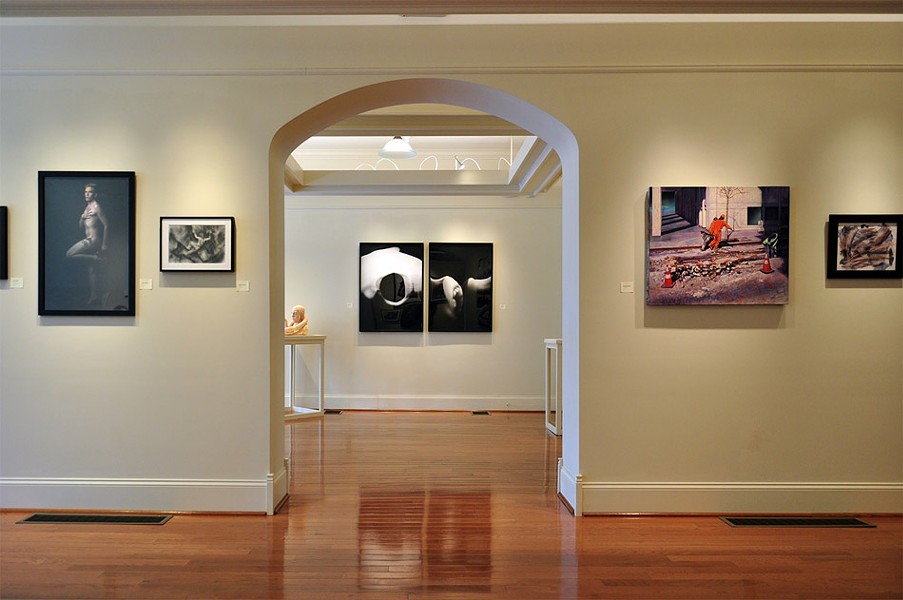 This new context wasn't only about focusing on the gender represented in each following artwork, and reassessing my reactions to identity cues. There was that, but more generally speaking, I was jolted into a deeper awareness of the ways, beyond sex and gender, that we automatically define others, and the fact that any act of re-creating the real -- in story and artwork alike -- leans heavily on using these taken-for-granted cues in order to minimize a human subject into a digestible version of themselves. Our efforts to understand, represent, and communicate are inherently limiting.

That sounds obvious, but we do it every day. Making split-second judgements, packing people and situations into little categorical boxes is how we move through the world, and in many ways that's extremely problematic.

For example, Kentucky-based artist Natasha Giles's painting, "Famille," features a group of brown-skinned children accompanied by an adult in a boat that seems to materialize from a prismatic ether as it approaches. More figures and the back of the boat fade into penciled outlines and washes of color. Further back in space and just moments before, the boat and its occupants did not exist to the viewer. And without context, each viewer's associations will define what they see -- a family of refugees is arriving in America, or the family is enjoying a day of fishing, or any number of other possibilities.

The ambiguity in Giles's work is intentional. In her statement, she says that she pilfers source material from public images, removing it from any context. "Many people are laying their private lives at the feet of the masses for consumption," she says in a provided statement. In her paintings, Giles seeks to "imagine, investigate, and become a part of that original moment."

Before they are lassoed into categories, children exist in a realm of endlessly refreshing possibility. Their newness makes them sensitive in their navigation of the world's rules and expectations. Massachusetts-based artist Andrea Olmstead's sculptural portrait of her young son, "Turtle," captures this vulnerability in the gentle curve of his back as he crouches on the ground to play, and in his pensive, inward expression. A creamy monochrome of milk paint covers the clay, and all indicates innocence or a blank slate -- except the clothing he wears.

Though there was no indication that the artist intended this association, the turtle-shell pattern engraved into boy's pants seemed to allude to the hardened armor that society requires boys to don, denying them the freedom to express their sensitivity.

Like those three, there are dozens of challenging, thought-provoking works by talented artists selected for the exhibit. You can check out the rest through July 1. 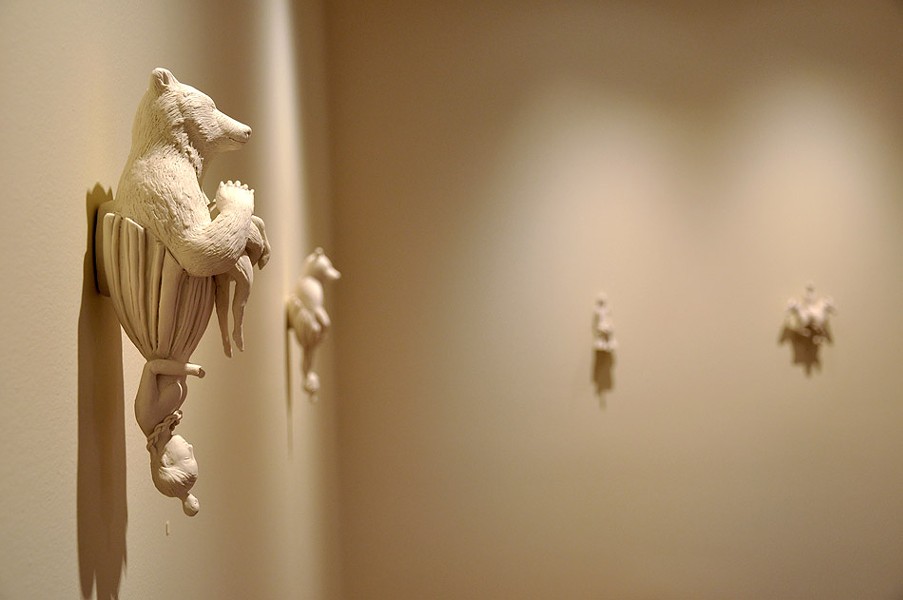 Upstairs from the main gallery, Honeoye Falls-based sculptor Robin Whiteman has a solo show of her tiny, intricate artwork. "Children of Illusion" includes 16 clay sculptures that hybridize humans with animals, and animals with other animals, often merging myth with religious iconography.

"This work is an ongoing exploration of consciousness," Whiteman says in her artist statement. "As humans we live in a world of polarities. It seems to me as though these apparent opposites are growing more extreme and vocal, whether coming from the natural environment, human culture, or our inner mind states."

"What is Possible" is a double-headed doe, with two sets of springing front legs pulling the gentle, alert beast in opposite directions, an equal and balanced eternal struggle. Suspended over a pile of antlers, the vignette resembles a pyre or the aftermath of a particularly abundant hunt. And in "Burden," a double-doe bears the horn pile on her back.

"Pet" is one of many Whiteman works that explore dual natures, expressed through the bust of a bear that terminates in the figure of a woman, who is upside down and joined with the beast in the center. The woman seems to consider her arms, which are truncated at the wrists, while above, the bear's be-clawed paws move to stroke the limp form of a rabbit and pig hybrid in its arms.

The work is a labor of lovingly crafted forms that possess a blooming power. "Each piece becomes a meditation on how I can bring more acceptance and love to the seeming divides within and around me," Whiteman says. "The diminutive size keeps the work personal, like a treasure or talisman. Small and quiet, yet potent."