As a composer, arranger, pianist, and conductor, Cary Ratcliff has for decades been a busy and important member of Rochester's musical community. Most recently Ratcliff took on the music directorship of Madrigalia, Rochester's venerable and much-loved chamber choir.

Ratcliff has also written many pieces for outstanding local performers, from chamber-music duos to operas, with an emphasis on choral music. The two careers will combine this weekend, when Madrigalia, joined by the Buffalo chamber chorus Vocalis, presents one of Ratcliff's major works: "Ode to Common Things," a 45-minute oratorio based on poetry of Pablo Neruda. This will be a new, revised version that is giving the 20-year-old work some new exposure.

The original "Ode" was scored for full orchestra, and while the work was well received and had its champions among conductors, a 45-minute contemporary work for full chorus and orchestra is an easier sell. "Various choral conductors would tell me, 'I wish there was a chamber version of this so I could do it with my chorus,'" Ratcliff says. "So I did one, and it was a game-changer for the piece." 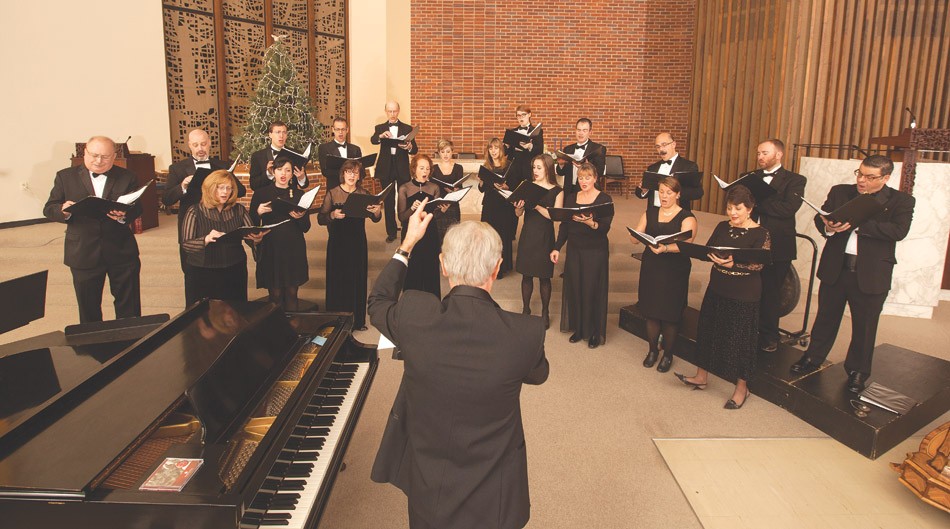 A new version of "Ode to Common Things" was recorded for Harmonia Mundi, an important classical label, by a top-notch chamber choir, Conspirare, under its conductor, Craig Hella Johnson. The recording was nominated for a 2015 Grammy in "Best Choral Performance"; it didn't win the prize, but Ratcliff says, it raised the piece's profile among conductors and choral singers considerably.

"Ode to Common Things," first performed in 1995 as part of the Rochester Oratorio Society's 50th anniversary celebrations, had a convoluted birth. Ratcliff says, then-conductor Roger Wilhelm wanted an American-themed oratorio, and the composer spent a year looking for the right words. It wasn't easy: "An oratorio is not an art song — it's a communal art. You need a text that everyone can sing together; that everyone can assent to."

Ratcliff's search led to a lot of reading of public speaking in what he calls "high poetic speech" — speeches of Martin Luther King and the like. "I asked many people, 'What writer speaks for all of us?' And of course everybody had a different answer.'"

The answer Ratcliff finally came up with was a bit of a left turn. "I happened across some poetry of Pablo Neruda, and was taken with his sense of our commonality," through his expression of ordinary things common to all cultures, Ratcliff says.

The Nobel Prize-winning Chilean poet expressed that commonality in poems praising the most common things. In Ratcliff's "Ode," Neruda's poems celebrate bread, scissors, a bed, and the guitar, and the profound connection of these basic things to the deepest experiences of our lives.

Not only did Ratcliff choose a text by a South American poet, he decided to set "Ode" in the original Spanish. "I couldn't, and wouldn't, have written this piece in English," he says. "The precision and rhythm of the poetry; the wit and delight in the original; the sounds of the Spanish words ... those all generated my musical ideas."

Ratcliff calls his current edition of "Ode" the "12-hand version," as its new scoring is for harp, four-hand piano, a couple of busy percussionists, and a guitarist. He intended the music to be "especially accessible," and its infectious use of Latin melodic turns and phrases is enhanced by the new arrangement. (The voice parts remain unchanged.) It is a powerful but lovable work.

Performances of the "Ode to Common Things," including this weekend's, feature translated supertitles (commonly seen in opera). "The audience can all laugh at the time, say 'ah' at the same time, and all read this beautiful poetry at the same time," Ratcliff says. "I see it as universal — not Latin American culture, but human culture."

This year marks Ratcliff's third season as the music director and conductor of Madrigalia. The group, which was formed in 1975 by Roger Wilhelm, will have a new performing home next season at the Clover Center for Spirituality and the Arts (formerly the Baptist Temple) on Clover Street. Ratcliff is in the middle of a three-year plan of programming for the choir, with such themes as "Magic, Spells, and Mystery," and a holiday concert that includes Hanukkah and secular songs along with traditional carols.

Ratcliff still has a busy life as a composer, and he hopes it will get even busier after he retires from his job as music director of Bethany Presbyterian Church in Greece later this spring. His delightful children's opera "Mice and Beans" was recently produced in Rochester, and he is continuing to work on another opera, "Eleni," a project that has involved him for many years.

"I have a big pile of semi-completed pieces," Ratcliff says. He also wants to produce a recording of various chamber music pieces with local artists.

"I've been pent up with chamber music for the past two years," he says. But this weekend at least, his focus is on an uncommon piece of choral music.