Made of star stuff

"Peter and the Starcatcher"

When "Peter Pan" opened on London stages in December 1904, an awfully great adventure began for the world and the story of a boy who would never grow up. Children, from that day forward, would dream of fairies and flying off to Neverland to fight pirates. Countless books, plays, movies and other pieces of pop culture would be inspired by the crowing Pan and his band of Lost Boys.

One such adaptation is "Peter and the Starcatcher," which runs through December 31 at Blackfriars Theatre. The play was first a 2004 novel by journalist Dave Barry and novelist Ridley Pearson, and adapted for the stage by writer and actor Rick Elice. "Peter and the Starcatcher" first premiered in 2009, and opened on Broadway in 2012, winning nine Tony Awards, including Best Play.

The plot is an origin story of sorts, a prequel to "Peter Pan." It follows Molly Aster, a precocious young girl who is traveling with her father, Lord Aster, a captain in service to Queen Victoria (God save her). Their ship, the HMS Neverland, is transporting a trunk filled with precious cargo to a remote island when they're ambushed by pirates. Three orphans locked away onboard — Boy, Ted, and Prentiss — join forces with Molly to defend the Neverland from a pirate takeover. 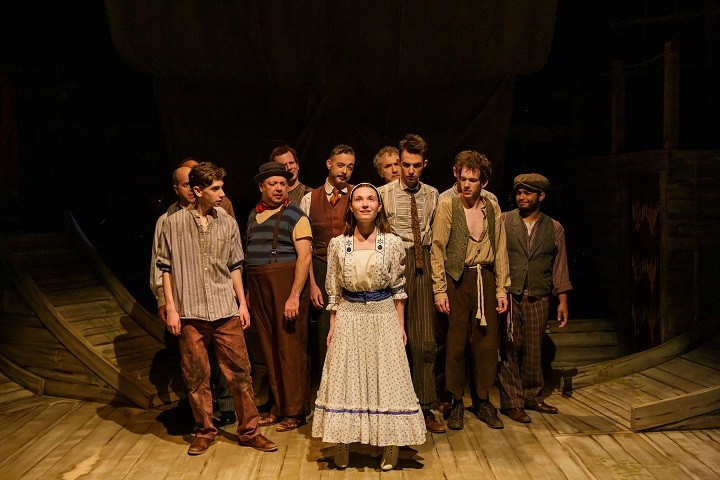 For the sake of spoilers, suffice it to say that Peter Pan enthusiasts will enjoy the many hat tips to the classic story throughout the inventive, zany two-and-a-half hour show (which includes an intermission). It's also a very family-friendly script, as long as the whole family can tolerate a few eye roll-inducing puns. Even better — there is a strong theme about independent young girls embedded in the story.

With Artistic Director Danny Hoskins at the helm, the Blackfriars cast is, in a word, marvelous. "Peter and the Starcatcher" isn't a traditional musical, but it is a play with music (original score by Wayne Barker) and lots of physical movement. The amount of timing and coordination between blocking, lighting, and sound is imperative for this show's success, and the cast functions as a synchronized unit, creating a comedic choreography that's incredibly powerful and emotive when needed.

The 12-person cast features many familiar faces from around the city's stages, with spot-on casting for each role. The leading lady — quite literally, as she's the only female in the show — is local high schooler Marcella Cincotta, who shines in the role of spunky Molly Aster. It seems Cincotta is typecast, she's so natural to the part, and she effortlessly steals the spotlight from a host of much older male co-stars throughout the show. As her father, Lord Aster, Mark Brummitt is the quintessential British gentleman, from posture to (his actual) accent. He makes the most of his lesser stage time with precisely timed reactions and perhaps the most expressive face on stage.

Joseph Buck (Prentiss), Harry Franklin (Boy), and Ben Liebrand (Ted) play the haphazard, energetic orphans, and Franklin delivers a stirring portrayal of Peter Pan as Boy. As Black Stache, Stefan Cohen is a swashbuckling pirate who swings between swaggering and sniffling with his fragile ego, the ideal counterpart to Jeff Siuda's sniveling Smee. Together, the pair elicited many a warranted laugh from the audience.

Rounding out the cast is Danny Kincaid Kunz as the unassuming Grempkin, Hector Manuel as the unexpected lover Alf, Jason Rugg as the doting Mrs. Bumbrake (and an equally good turn as Teacher), Scott Shriner as the man-of-few-words Captain Scott, and Rick Staropoli as the ruffian pirate Slank. Each member of the cast brings such strong stage presence and talent to the production that it's impossible to see a weak character on stage at any time — a truly impressive feat.

The set design is particularly important in "Peter and the Starcatcher," as it's a show dependent on a multi-level, multi-dimensional set and the "star stuff" places some expectations for special effects. Eric Williamson and props master John Engel have worked their usual expertise to create a ship onstage, and plenty of tricks along the way provide a bit of magic. There's even a place for pianist Amanda Meldrum-Stevenson (also the music director) and drummer Greg Gascon to be onstage as they play the sound effects and score throughout the show. Janice Ferger's imaginative-yet-period costume design rounds out the aesthetic of the set.

While it's not specifically a holiday show, "Peter and the Starcatcher" offers just the kind of feeling people seek around this time of year: innocent, child-like wonder mingled with the belief that faith, hope, love, and a little bit of pixie dust — err, star stuff — makes anything possible. If you believe, clap your hands, and grab tickets before it sells out.