News of a new concept from the team behind Restaurant Good Luck has been circulating for nearly a year, and at long last, it's here. Lucky's, which opened February 19, is a 56-seat casual restaurant and bar on North Winton Road, housed in the building formerly occupied by the Wintonaire, which closed its doors in October 2018.

Lucky's is the third joint venture by Mike Calabrese, Chuck Cerankosky, and Dan Martello, who co-own Restaurant Good Luck and the Jackrabbit Club, a 7,000-square-foot event space adjacent to Good Luck. The three also have a list of other successful local establishments to their names: Calabrese is the owner of Java's Cafe; Cerankosky is co-owner of Cure, as well as food and beverage director at Bar Bantam and Radio Social. Martello is a co-owner of Cure, where he is also chef.

Cerankosky describes the new restaurant as a smaller, more casual, neighborhood version of Good Luck. "If Good Luck is for special occasions and showboating, this is an everyday place for everyone to have a great meal," he says.

According to Cerankosky, the concept of a more laid-back restaurant has been a long time coming. "We had set our sights on doing a more focused and approachable restaurant. We had to find the right neighborhood where we fit," he says, adding that the partners had their eyes on North Winton Village for some time.

Wine, beer, and cocktails are planned, but the restaurant does not yet have its liquor license. Nevertheless, you can still indulge in Lucky's zero-proof craft beverages, which, judging by the menu, look every bit as inventive as the cocktails at Good Luck. The restaurant's bar program is run by Naomi Moore, a Good Luck veteran.

In keeping with the more casual feel, the price point at Lucky's is lower than that of Good Luck. Lunch mains run $12 to $21, dinner entrees $16 to $42, and cocktails, when they come, will likely run around $9.

I stopped by on a recent Friday shortly before opening day to get a preview of the space. The restaurant sits near the corner of North Winton Road and Browncroft Boulevard, and faces the Winton Road Library and Winfield Grill. The exterior of the building, which Calabrese owns, has been freshened up with a coat of white paint, simple signage, and a striped awning. The parking lot has expanded to around 40 spaces. But the real transformation has happened inside. 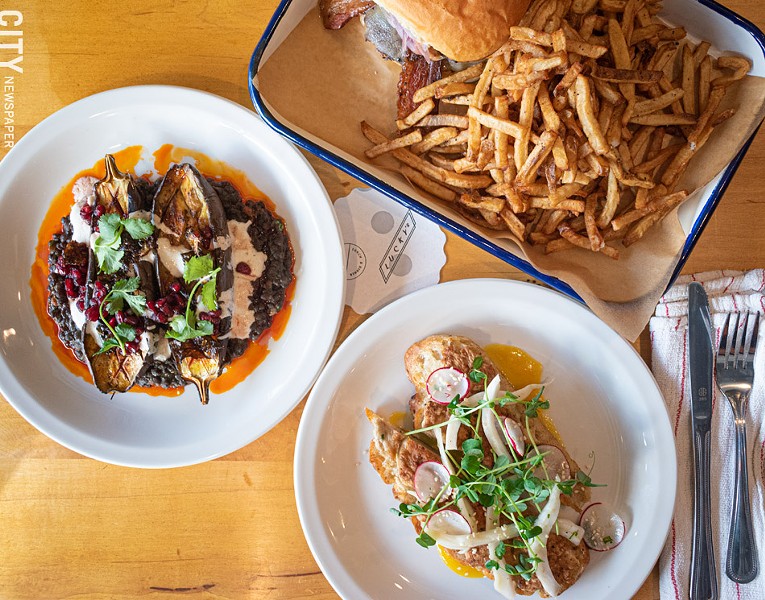 The renovations began in June 2019, though they took longer than expected, according to the owners. The restaurant's opening, originally slated for August, was pushed back to November, and then to early 2020. "We thought the time table would be faster, but one little nugget of an idea snowballs and all of a sudden we're ripping the place apart," Cerankosky says.

In renovating the Wintonaire, Calabrese, Cerankosky, and Martello sought to modernize the space while also taking care to preserve the past. "We wanted to create a sense of history using new construction to make the interior feel like it's always been there," Cerankosky says, explaining the collage of old and new. "We want it to look like we came in here and peeled back the layers of the restaurant and this is what was left."

The gleaming wood bar is original, as is the tin ceiling over it. A welcoming red banquette curves around the window-lined front room. The mustard-colored walls are hung with an eclectic mix of art, objects, and photographs, some found at antique stores, some brought in by the owners from their homes. Winking allusions to luck and gambling are sprinkled around the interior if you look closely enough: a horseshoe door knocker on the front door, a few playing cards on the walls. The overall effect makes you feel as though you've stepped back in time — though to what era, I couldn't say.

If the previous collaborations between the trio are any indication, Lucky's is sure to draw a crowd — in no small part due to the restaurant group's talent for photo-worthy interiors, perennially surprising menus, and savvy social media strategy. Though I didn't have the opportunity to visit Lucky's as a customer before press time, I'll be back soon, and ready to try my luck.

Mary Rice is a freelance writer for CITY. Feedback on this article can be directed to becca@rochester-citynews.com.