For its extensive history, tarot cards are still very much a mystery.

They can be used to self-reflect, to provide possible answers to pressing personal questions, and to help make decisions related to work, money, spirituality, health, and more. But many people turn to tarot for insight on love and relationships.

"It's one of the main questions, probably the number one question," professional tarot reader Fayebriel Barrette says of love. She describes reading tarot cards as an occult practice. "It's the hidden, it's the mysterious," she says. 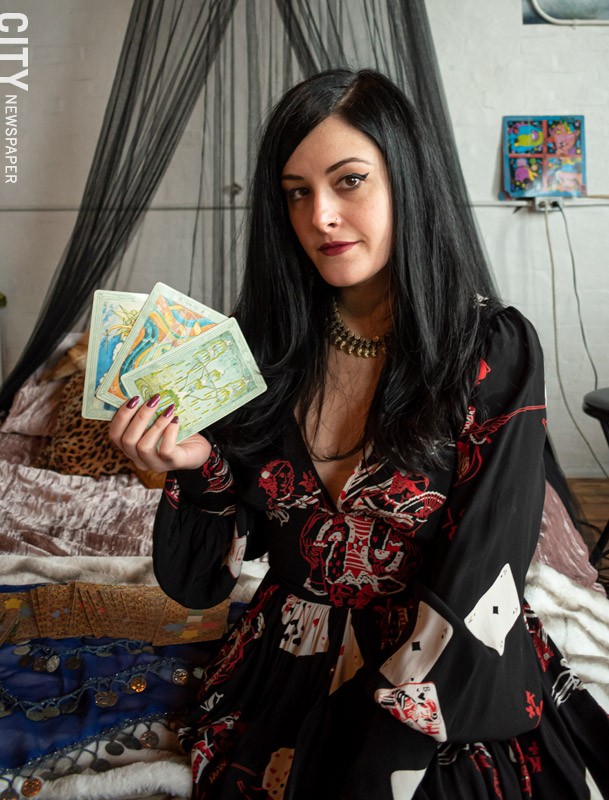 Even with its enigmatic appeal, tarot has practical applications. Its origins date, at the very least, to playing cards in the 13th and 14th-century Mamlûk dynasty in Egypt. Tarot has existed as a card game since the early-15th century, beginning in Italy and later spreading to countries such as France, Germany, and Switzerland by the late-15th century.

"It helps you have a conversation with yourself, but you're outside yourself," Barrette says. "So instead of bouncing these ideas off your partner, if you don't have one, your tarot deck can be like your companion."

In a typical tarot reading, the person asking the question (also known as the "querent," the seeker) may have a specific issue that they want clarity on. Barrette will then turn over cards in a specific order, or spread, and guide the person through an interpretation of the cards.

In a sense, the ritual acts as a kind of counseling session. The tarot reader gives someone a forum to talk, and provides a comfortable environment and structure for opening up. The reader can reflect things back to the seeker, but ultimately the seeker is doing the work of self-reflection.

Because the solutions suggested by the cards are inevitably open-ended and subject to individual interpretation, seekers may get different answers from the ones they were expecting. Barrette says to be ready for this possibility.

"I think it'll definitely send you into your shadow work," she says. "I think it'll open up all these aspects of yourself that you weren't necessarily going there for. You thought it would be about this other person, or this potential love that you're looking for, but it really turns out to be, 'Whoa, there's all these things that I need to work on.'"

Barrette, also known as Lady Faye, points out that a different answer does not mean it's the wrong answer.

"They're like, 'I wanna know about my relationship,'" she says of people who get their readings. "And then all this work stuff comes up. It's not a bad reading, because it's just saying, 'No, you need to focus on work, and then you'll be open to a relationship.'"

When a patron is infatuated with a particular person, Barrette may pull a certain number of cards corresponding to the prospective lover's name — i.e. three cards for Tom, or four cards for Rose — along with a guidance card that keeps the reading pegged to a particular idea or thought. However, if someone wants a reading about another person, they're too fixated on that person, she says.

In the majority of romance-related readings that Barrette does, the patron is being ghosted and wants clarity about the situation. She has this advice: "If you have to wonder whether they like you or not, it's not the right time."

A lot of the time, people will get a reading, but choose not to listen to the answer they get. This is frustrating for a tarot reader, but Barrette can relate.

"In a weird, twisted way, I'm good at relationship advice because I have the worst dating history ever," she says. "I've not followed my own readings and not listened to what I was supposed to do so many times. I think it's made me better at it — 'Oh, I see that road you're going down. Take my word for it: You don't wanna do it.'"

Barrette, who splits her time between Rochester and New Orleans, recommends that when having your tarot read, you should bring a notebook and pen for jotting down notes, and keep the rest of the day unscheduled, in order to leave time for introspection and self-care. 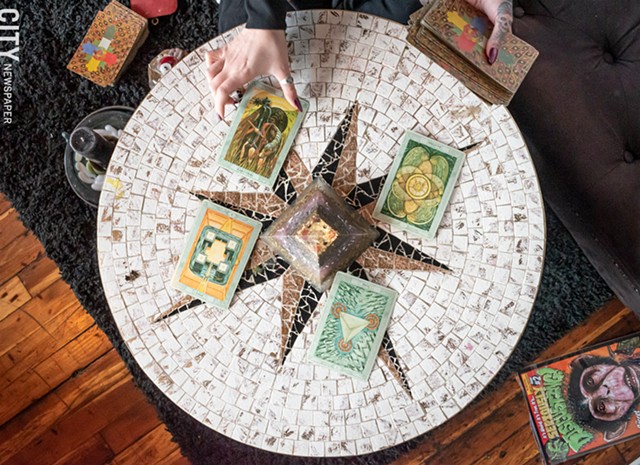 Tarot is a mental exercise, and you're only going to see what you're ready and willing to see, what's already in your conscious and subconscious thoughts. With that said, you don't have to take a tarot reading as gospel.

In tarot readings that focus on love and relationships, there are prominent cards that are ripe for misinterpretation. This is particularly true of cards from the Major Arcana, the group of 22 cards that addresses overarching themes of great importance when understanding a reading. Barrette says The Lovers is one such easily misinterpreted card.

"A lot of times, people get The Lovers, and they're like, 'Oh, yay, I'm gonna find the love of my life," if they're single, or if they're with somebody, 'Oh, this means we're gonna stay together forever,'" Barrette says. "Well, The Hermit presides over the marriage of The Lovers. So it's really all about taking that time for yourself to be a whole person, so that they take their time to be a whole person. When you come together after your Hermit time, that's when you can be The Lovers. It's about loving yourself and making sure that you're whole, so that you can be the best lover for your partner."

For those in an on-again, off-again relationship, receiving The Lovers card in a reading can mean that getting some space from a significant other could be good for the relationship. On the other hand, The Hanged Man card may mean that a person in that relationship is stuck, stagnating between a decision to stick with their partner or move on. That kind of self-inflicted suffering may be telling the seeker that they don't have to stick with that one person.

For those in a committed relationship, such as a marriage, Barrette says it's important to not sacrifice your sense of self. This message may come out in a reading for someone who is a mother, for example. A reading in which both The High Priestess and The Empress cards appear may mean that the seeker needs to reconcile her independence and her motherhood. The Empress can represent the woman as the maternal nurturer and embodiment of feminine authority, while The High Priestess can refer to the part of her that is intuitive, mysterious, and focused on self-exploration.

Popular tarot decks include the ubiquitous Rider-Waite Tarot and the iconic occultist Aleister Crowley's Thoth Tarot deck. Another classic is the Tarot of Marseille, with its bold primary colors and medieval imagery. For a more modern take, there is local artist Jay Lincoln's RochesTarot, as well as my personal favorite, The Fountain Tarot. To find the right tarot deck for you, aeclectic.net is a robust resource.

Daniel J. Kushner is CITY's music editor. He can be reached at dkushner@rochester-citynews.com.