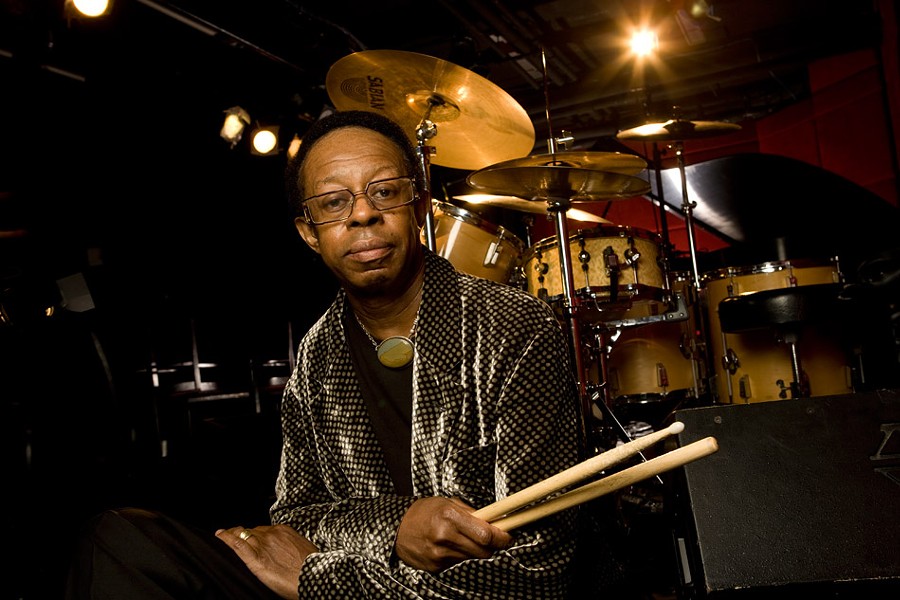 PHOTO COURTESY XEROX INTERNATIONAL JAZZ FESTIVAL Drummer Louis Hayes will be joined by some of the top younger players in jazz when he visits Rochester this month.

Louis Hayes was just 19 and living on Detroit's west side when his reputation caught up with him. Pianist Horace Silver, fresh out of Art Blakey's Jazz Messengers, had heard about the young drummer. Silver called up Hayes and asked him to move to New York and join his new band.

Hayes packed his drums and caught a train east. It was 1956, and jazz was on fire. "I was able to come to New York while all of those different generations were performing," says Hayes, "people like Coleman Hawkins, [Papa] Jo Jones, Cozy Cole, Roy Eldridge, and Lester Young. Then there was the younger generation — Miles [Davis], Philly Joe [Jones], Max Roach, Stan Getz, and J.J. Johnson — and I had the chance to make records, make history, with that generation."

Growing up, Hayes was surrounded by drummers. His father played and so did his cousin, 10 years his senior. On the radio he heard the big bands and, at 13, a friend introduced him to the music of Thelonious Monk, Bud Powell, and his soon-to-be hero, Charlie Parker.

"I grew up hearing all kinds of music, but what was in my brain was this art form they called be-bop jazz," says Hayes. "That was the way I wanted to go. I was never the kind of person who couldn't make up his mind on what he wanted to do."

Silver met Hayes at the station and took him to the Alvin Hotel on 52nd Street, directly across from jazz heaven. "I could look out my window and see who was going in and out of Birdland," he says.

"It was a great, great experience," says Hayes, "one of the best of my life. We were a team, and we were great friends — the whole organization, Cannon, Nat [Adderley, trumpet] and Sam [Jones, bass]. The piano chair was never complete until Joe Zawinul arrived."

In his early 20's, Hayes was at the epicenter of the jazz world, but he was still green and needed role models. He found some great ones.

"My mentor was Papa Jo Jones," says Hayes, "and it wasn't about playing drums. He would say things about living life, being a man, living in this music world. You would see the older gentlemen, Coleman Hawkins and Roy Eldridge, and see the way they carried themselves. Jo liked me, so he would take me to places and introduce me to things, things that you need to help you carry on."

By now, Hayes had moved to New York's upper west side, and it was not just any neighborhood.

"I lived on 101st Street; John Coltrane lived on 103rd Street," says Hayes. "I used to go to his apartment and listen to him practice. We all looked at Coltrane in a certain way, because he worked harder than most people would work at anything. He put more time in, and he was not kidding around. He was constantly working at anything his magnificent brain was telling him to work at."

Was he aware that they were creating classics?

"It was just another recording date," says Hayes. "It never entered anyone's mind thinking like that. We were all just coming up, living our lives. The music was going in a certain direction and people were just growing and trying to play at the highest level of their ability. I don't think anyone was thinking: Years from now this is going to be great."

After six decades of playing on concert stages all over the world with some of the greatest bands in the history of jazz, one venue still stands out for Hayes.

"One place that I always remember was The World Stage in Detroit," says Hayes. "It made me more nervous, just being in that environment right there in my hometown, because Detroit was a very competitive place. People were very knowledgeable, and I was very young."

Joining him on the Kilbourn stage will be some of the top younger players in jazz: Vincent Herring (alto sax), Jeremy Pelt (trumpet), Rick Germanson (piano), and Dezron Douglas (bass).

"They ask me a lot of questions," says Hayes. "I can see how life changes and how I looked at some of the older musicians when I was their age. And all of a sudden — seems like time goes so fast — now they're looking at me like that."

Louis Hayes and The Cannonball Adderley Legacy Band perform Tuesday, June 24, 6 and 10 p.m. in Kilbourn Hall at Eastman School of Music, 26 Gibbs Street. Tickets are $25, or you can use your Club Pass. Louishayes.net.