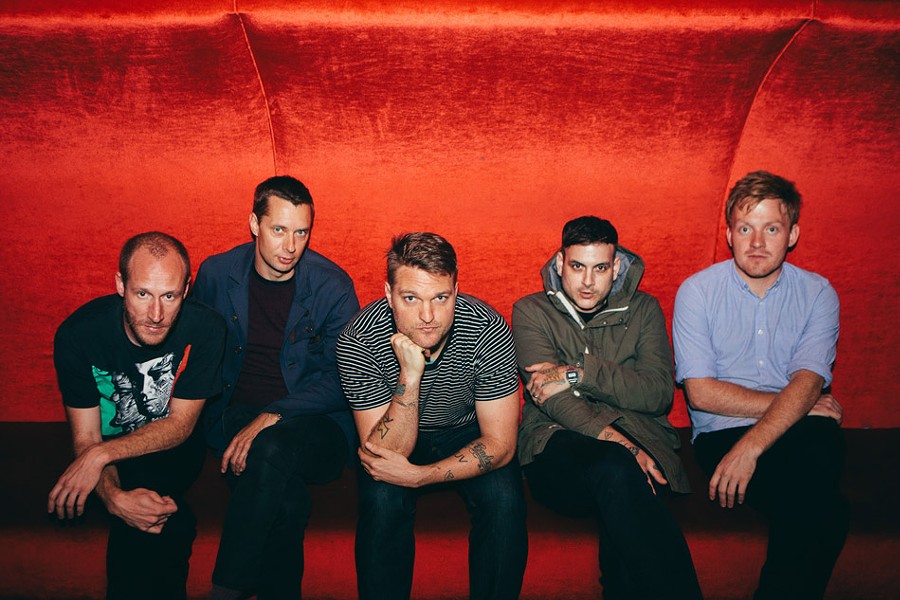 Nathan Willett doesn't take success for granted. In music, the obstacles facing a band are understandably difficult no matter the noble intentions beginners may hold. Making it at all is unusual; lasting a decade into band-hood — as Willett's band, Cold War Kids, has — is rare. "The original four guys and how we started, I think there was so much that happened that we never would have dreamed," Willett says.

Formed in Fullerton, California, in 2004, the four original members of Cold War Kids convened frequently above a restaurant named Mulberry Street — also the title of the band's first demo — planting the seed of what was to come. That demo became the first of three introductory EPs that led up to Cold War Kids' 2006 debut full-length, "Robbers & Cowards." With a loose, blues-tinged style and poetic recitations of lyrics cataloging life's travails, the band had a sound instantly recognizable and fit for the time in both style and uniqueness. On the strength of those early songs and formidable live performances, the band hit the ground running with early successes and national attention.

Cold War Kids embarked on a pattern of releasing a record and then relentlessly touring in its support. The band's second and third efforts (2008's "Loyalty to Loyalty" and 2011's "Mine Is Yours") — with a solid EP ("Behave Yourself") sandwiched between — brought further publicity. But with success, so too came the inevitable band chemistry issues.

"In terms of the amount of time you spend together and what it's like to collaborate in kind of a heated way, if you can find a way to kind of bottle it and keep it going, that's great," Willett says. "It's always kind of a miracle for a lot of bands."

The band's original guitarist and drummer both departed soon after "Mine Is Yours," and that loose, bluesy style evolved over subsequent records — it's only natural amid the changes that come with adding and subtracting band members. "We all kind of didn't plan on all this happening together," Willett says, "and in a way it had run its course for us all working well together and having a common vision for what we were doing. None of us had much previous band experience before at all. We had a great chemistry and did great work. It ran its course."

Entering a new stage as an outfit, Dann Gallucci, a former guitarist for Modest Mouse, joined the band full time. "Dann had a unique relationship, too, because he was a live sound engineer for us, I think he probably kind of understood us sonically and what we were doing better than anyone," Willett says. "So he was definitely the right guy to come in and be a guitar player and, in a way, overseer of what we record."

After Cold War Kids' fourth record, "Dear Miss Lonelyhearts," the band again went on tour. During that time the original drummer was replaced with another Modest Mouse (and The Shins) member, Joe Plummer, (as Wikipedia notes, not to be confused with Joe the Plumber) and credited multi-instrumentalist and singer Matthew Schwartz as a proper member.

Transitioning along a seemingly natural path for a successful band, the member changes fundamentally altered the band makeup and shifted plans for pushing things forward. Regarding the quick turnaround between "Lonelyhearts" and the band's fifth record "Hold My Home," Willett says of the streamlined process for writing the new record, "We weren't going to give ourselves the time to overthink stuff. We were going to get in there. I brought in a bunch of songs with various degrees of completion that everybody contributed to and that was kind of what came out."

Confident with the results of the record — which was released October 2014 — Willett says, "It was one of the first times I felt a certain completion. There's a lot of contributing members and an overall vision for a sound we're working towards: an indie rock record."

That idea of "indie rock," is a concept of which Willett is consciously aware. Associating the band's past most closely with this idea, future hopes are pinned on evolving past that categorization. "That is what we've set out to do every time with varying goals," he says. "I think you have to ask yourself at that point, would we want to make a sixth indie rock record or would we want to try to really do something different. That is really the kind of thing that hit me right when we were finishing this record."

Focusing on song-craft and the ideas behind new material is a natural area to focus on when pushing things forward.

"The song 'First' that is on this record is our furthest reach into both a rock song that is both modern and has a lot of pop elements to it," Willett says. "There's less of a bluesy sound and looseness that we started with."

Pointing to contemporary examples Arctic Monkeys and Queens of the Stone Age, Willett says he thinks the band will continue to go down that road, making recordings like "First."

"There's this huge movement to where a lot of these rock bands are finding the space between being who they are and having the identity of a rock band and also being extremely modern in their approach to record making and using pop elements. I think it's exciting and I'm excited to go down that road for what we do next."

Recognizable success and engendered longevity aside, it's clear that five records in, there is more to come from Cold War Kids — though in what form is undecided. "It's definitely a band that has a huge amount of evolution in terms of maybe outliving the existence it was supposed to have, in a way," Willett says. "You have to push some people around to find the right thing that keeps it going."