On a crisp October day, a handful of construction workers mill about the underbelly of the Frederick Douglass-Susan B. Anthony Bridge, an acre expanse that was once occupied by a nearly year-round tent encampment for homeless people.

The workers walk on concrete platforms and bowls as smooth as glass, taking measurements here and pouring concrete into small gaps there. Some are clad in neon construction vests. Others wear camouflage jackets embossed with the logo of Thrasher, the monthly magazine that is the bible of the skateboarding universe.

They are putting the final touches on the first phase of the Roc City Skatepark, a 26,000-square foot skate plaza on previously vacant land along the Genesee River, and in the process delivering on a dream of the skateboarding community that was 13 years in the making. 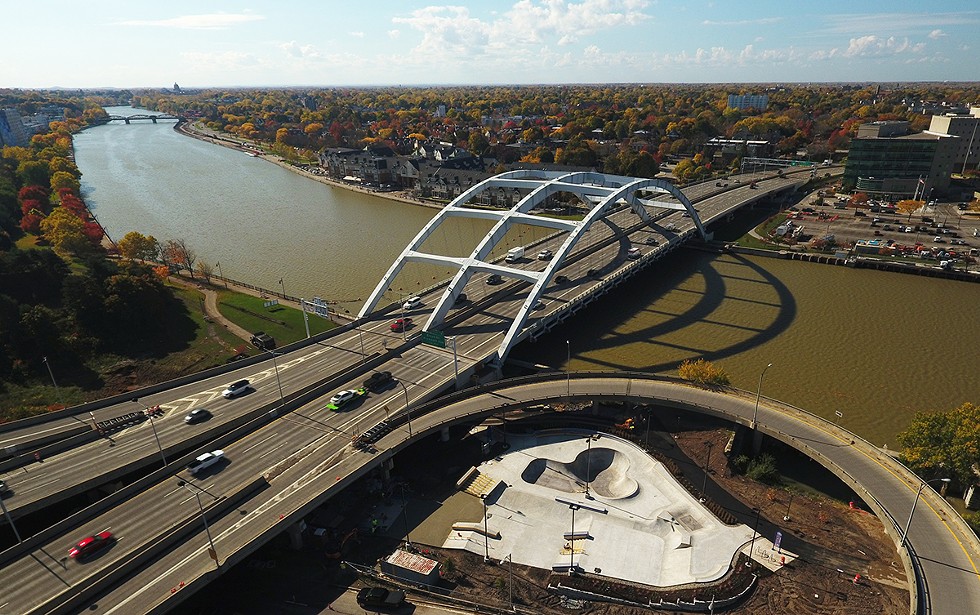 Among them is a tall and lanky man with a beard speckled with gray. His name is Alan Presutti, who, as the 46-year-old executive director of the Friends of the Roc City Skatepark, has been at the forefront of the push for a city skatepark for a third of his life.

“I’ve always tried to stay focused, I always believed this was going to happen,” Presutti said. “For me, failure wasn’t an option. This is who I am, I’m a skateboarder, it’s how I live, how I breathe, since I was 13 years old.”

Describing the park, which opened Nov. 5, as a long-overdue development for local skaters doesn’t adequately encapsulate what the place means to the skateboarding community.

Until now, Rochester was said to have been the only city among the 125 largest in the country without a public skatepark. Skating in the city and its suburbs has for decades been a nomadic pursuit, with its practitioners relegated to grinding on storefront window ledges and parking lot curbs and kickflipping off supermarket loading docks, spots from which they were inevitably ousted.

Through skating, or simply looking for a place to skate, many skaters had their first encounters with police and security guards. They received warnings and citations and the wrath of residents who complained about the thwacking noise of their passion. Toss in the tattoos, the music, and the studied ragtag appearance associated with the sport, and you had athletes consigned to second-class citizen status.

For them, the Roc City Skatepark offers a message of validation: we have arrived. But it seemed to take forever.

"For our local skateboarders, roller bladers, BMX bikers, and other sport enthusiasts, this is the best day ever," Mayor Lovely Warren said, before cutting the ribbon in front of a crowd of board-wielding onlookers. "They've waited for decades for this." The Friends of the Roc City Skatepark organized in February 2008 and that year began holding public information meetings around a potential city skatepark. The group also received a $10,000 grant from the Tony Hawk Foundation. Initially, it had hoped the park would take off swiftly.

That was not to be the case, however. After much debate among city officials as to where to locate the park and how to fund it, a proposal was eventually submitted, only to be abandoned in time, overshadowed by projects that held greater priority.

“For a long time, it really felt like every time we took one step forward, we took three steps back,” said Aaron Costa, owner of the Rochester skateshop Krudco.

One of the major steps forward happened in 2013, as the city began to flirt with the idea of putting the park under the bridge. Stantec, the engineering firm currently working on the park, had released renderings for a skate plaza and a $50,000 feasibility study was carried out by the city, which found the project viable. 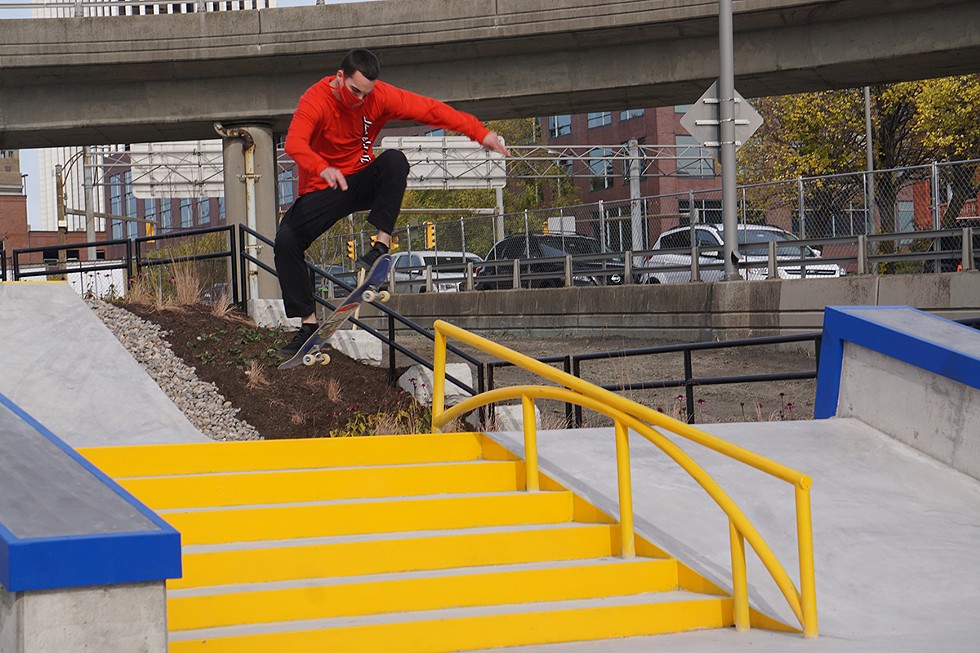 The following year, though, the city’s eye shifted toward Charles Carroll Plaza on Andrews Street as a potential location for the park, which would have been the anchor to a broad renovation of the plaza and accompanying parking garage. But that plan was later scrapped, and for Jim Maddison, then president of Friends of the Roc City Skatepark, there was a sinking feeling that the project was dead in the water.

“We had nothing at that point,” Maddison said. “They were going to move it there, leverage all of these resources, fix the garage, and we will put the skatepark there, and that went to nothing, no, we aren’t doing that.”

Maddison and Presutti said they believed Warren, the fourth mayor to hold office since talk of a park began, was sincere in her intent to build a skatepark. But for them answers to questions of where and when and, more critically, expense, became increasingly elusive as the years wore on.

“Rochester can be a very conservative city,” Presutti said. “It can be difficult to convince people why we need this, and how much money we need to spend to do it right.”

But a windfall came in 2018 when Gov. Andrew Cuomo announced Roc the Riverway, a series of development projects along the riverfront bolstered by $50 million in state funding. The skatepark, now firmly planned to one day open under the bridge, was set to receive $1 million in support.

Additionally, the Tony Hawk Foundation, which through its “Built to Play” initiative helps underserved skateboarding communities open skateparks, pledged $250,000 to the project. The total cost of the park clocked in at $1.5 million.

The skatepark was again alive, and ground was broken the following year.

Skateboarding and rebellion have been intertwined since the earliest days of 1970s California sidewalk surfing. But it was less by choice than design that skateboarding became an outlaw pursuit.

“Being a kid growing up in this sport, we didn’t want to have to run from security guards or trespass,” Presutti said. “That was something we had to do, there was nowhere safe for us to go. It was a risk we had to take just to be able to do this thing we all really loved.”

Skateboarding today is no longer an underground sport by any definition. It is firmly embedded in youth culture. This year, researchers at the University of Southern California published a study — funded by the Tony Hawk Foundation — that showed how skateboarding builds resilience, encourages diversity, and fosters community in young people across varying backgrounds.


Lest there be any doubt about skateboarding’s mainstream appeal, the sport is set to debut as an Olympic event at the next Summer Olympics in Tokyo. The global skateboard market is currently valued at just shy of $2 billion annually and financial analysts have projected it to rise nearly 25 percent to $2.4 billion by 2025. A skatepark building boom in cities and towns across the country has fueled growth in the sport, as has sponsorship support from huge companies like Nike and Pepsico.

“The new generation of kids are into ‘action sports,’ skateboarding, BMX, roller skating,” Costa said. “You look at this wide group of individuals, from five year olds to 50-year-olds, there’s whole families that do this activity. And there’s nowhere for them to go.”

RELATED:  This shred ain't co-ed.
For one night each month, the girls-only Ladies' Night takes over Breaking Free Skatepark

Supporters of the skatepark believe what kept it on hold in Rochester for so long was a lack of recognition of the public benefit that skateparks offer. While there is a stigma that skateparks attract crime, other cities have reported seeing the opposite effect. Following the construction of a skate plaza in a high crime area in Long Beach, California, in 2008 for instance, the city reported that drug-related incidents fell 61 percent and that violent crime dropped by 29 percent in the immediate area.

Costa believes the skatepark will inevitably bring more money to the city.

“When you have an attraction like this, you’ll have people not just from Rochester, but from the surrounding towns coming here for the day,” Costa said. “And what will they do when they’re here? They’ll spend money at my shop, or they’ll get lunch, they’ll spend money in our community.”

On a recent Tuesday night, Kanten Russell, a professional skateboarder-turned-skatepark designer from California, hopped a plane there to Rochester. In two days, he would be under the Frederick Douglass-Susan B. Anthony Bridge for a final walkthrough of the park he designed.

On the walk, he pointed to subtle artistic touches he thought encapsulated a true “Rochester” look. Rails painted a vibrant yellow and complemented by ledges of cool blue. Mosaic tiling on the lip of the nine-feet deep pool is also laid out in the same color scheme. At the center, a steel Flour City-Flower City logo star supports a kinked rail over a pyramid.

“Really, the way we enjoy trying to start off a project is kicking it off the right way and looking at it from a high level perspective,” Russell said. “Does it fit here? What will it look like? How much will it cost? Those are the first steps.” 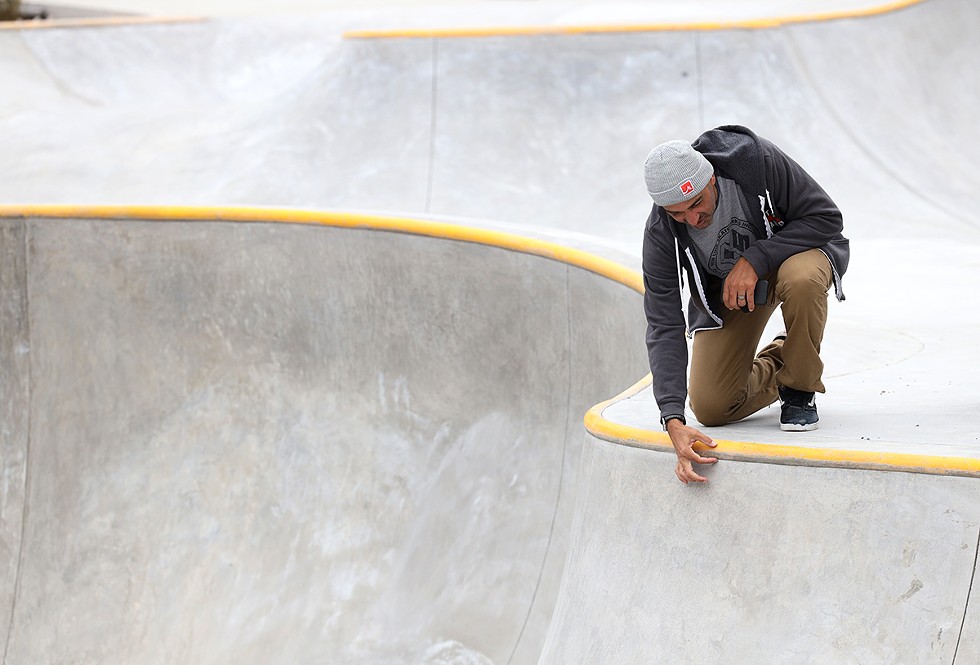 Russell said careful consideration was put into making sure there was something for everyone at the finished park. There are mellow banks, low ledges, and plenty of stout transition pieces for novices. At the same time, there are full vertical sections, handrails, stair sets, and steep ledges for the more daring shredders. Russell said it was meant to be a “community asset.”

“At the end of the day, the skaters and the residents who don’t ride are going to be able to celebrate, high-five on what it looks like as part of the community,” Russell said.

While the ribbon-cutting ceremony at the park marks a win for the skateboarding community, members of the Friends of the Roc City Skatepark said there is still work to be done to create their grand vision.
Presutti envisions a county-wide network of parks, with small safe-skate spots around the city and each suburban town having its own park, all of it designed by skaters.

He points specifically to Honeoye Falls, where the town greenlit skaters to build their own park at Monroe Street Village Park. The project began last year, and continues to grow.

“We have to think about the resources we have available to the kids here,” Presutti said. “I hope that once this park is settled in, the city sees how much value is here.”

Maddison, who does not participate in any action sports, picked up work with the Friends after making a promise to his children to get a skatepark built. Those children were 10 and 4 years old at the time. They’re now in their teens and early 20s. Maddison said he sees the park as a promise fulfilled.

“We’ve never had a good park in Rochester,” said Maddison’s son, 16-year-old Harry. “We’ve had indoor parks, but it’s hard to go with your friends because you always have to pay.”

“This just means a lot,” he added. “We have somewhere to go every day.”