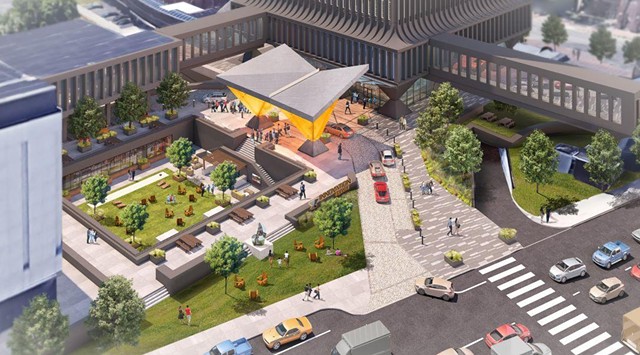 In the midst of downtown Rochester’s new Innovation Square development is an ambitious plan to resurrect the former Xerox Auditorium, creating a new performance space for the city. Natalie Fuller and Karl Stabnau plan on having the Theater at Innovation Square up and running by early summer.

“We’re really hoping to give back to the community,” Fuller said, “and provide a space here for groups to come in and either do shows at limited capacity at whatever the guidelines are from day-to-day and week-to-week.”

Formerly known as Xerox Square, Innovation Square is a city block of connected buildings on South Clinton Ave. Gallina Development is re-purposing the first five floors of the site’s 30-story tower as student housing, to be made available for multiple college campuses in the area. It will include a lounge and fitness area, ready for occupation by August.

On the other side of the stone plaza is the 700-seat former Xerox Auditorium. Over the past decade it has been largely unused, with the exception of shows during the CGI Rochester International Jazz Festival. Fuller and Stabnau’s Innovation Arts Management company has agreed to a long-term lease on the space.

Fuller and Stabnau have already given two dozen performing-arts organizations in the city a tour of the space.

“We’re looking at making this a truly multi-disciplinary performing arts center, right in the heart of downtown,” Fuller said. “And so all of those organizations have been in, they’re touring, they’re very excited about the space, and what it will mean for them.”

Stabnau said, “It’s likely that colleges may be interested in doing some performances here, but what we found is the vast majority of our programming will be community arts groups and music, theater, dance, comedy, esports, community lectures, TED Talks, conferences, those types of things.”

Fuller and Stabnau, who are married, are both musicians and teachers. And now they’re downtown developers.

“When this opportunity arose to lease the space from Gallina Development for the theater,” Fuller said. “We thought, 'well, so much for that house that we were saving for.' We really believe in the arts in Rochester and sowing back into the community, so we’ve been devoting our savings to getting this place up and running.”

“We’ve been looking at spaces downtown, because I grew up in Rochester, this community means a lot to me,” said Stabnau, a jazz saxophonist who also teaches at Rochester Institute of Technology.

While the theater is in good shape overall, they are planning updates to the stage and theater infrastructure with a new sound and light system, multi-camera high-definition streaming equipment, and adding a box office and a concessions area. The theater has a parking garage that can accommodate more than 350 vehicles.

“There’s nothing in this community that’s 700 seats and has a proscenium and ability to do lighting shows and sound things, and has built-in parking right in the complex and located in downtown,” Stabnau said. “So we held our breath and jumped in.”

The plan announced on Friday also calls for a new café to occupy the glass pavilion located at the corner of South Clinton Ave. and Broad St. as part of the Innovation Square campus.

The space will also act as a meeting place for people in the area, and business owner Jessica Randle said, “It’s a mission of mine to create a place where we can savor good tastes and sounds, enjoy the company of others, and take pleasure in things we may have once taken for granted.”

The multi-level café will serve breakfast and lunch.

Marketing Director for Gallina Development, Lauren Gallina, said that the new tenants at Innovation Square will help with the company’s goal for the project on working to engage the student population as well as attracting the general public.

“The arts community is a large part of that as well as food and beverage and things for them to do, so certainly as we start to populate the building with students, things for them to do and curating the experience of the entire campus is extremely important to us and these are two new tenants that will help us do that,” Gallina said.