The last five years has seen a growth in local distilling, so City wanted to learn more about three growing companies

You can hear the music before you open the doors to the Iron Smoke Whiskey headquarters (111 Parce Avenue) in Fairport. Classic rock streams out of Marshall Stacks while family and friends help bottle Iron Smoke's two products, Apple Wood Smoked Whiskey and Rattlesnake Rosie's Apple Pie.

"Every bottle is hand-signed," says co-owner Tommy Brunett. "The date is written on each one; people collect them, they'll buy one to drink and one to collect. The older ones are worth a lot of cash."

Brunett, along with co-owners Steve Brown and Ron Kirshner, started Iron Smoke five years ago. The whiskey is apple-wood smoked, the concept coming together after realizing that "no one's really combined those two great American past times," — apples and whiskey — "and used the local farmland around here," Brunett says. The distillery is a New York State Farm Distillery and sources its grain locally; the apples come from Red Jacket Orchards in Geneva.

The distillery set up shop in the old American Can Company in Fairport that used to produce Genesee Beer cans, among its other products. Brunett and company have made some renovations, and a tasting room will soon be built, spearheaded by a former Iron Smoke intern from Nazareth College.

"We wanted to make it feel like Skully would approve, we always find ourselves asking 'What would Skully do?'" Brunett says, referring to Iron Smoke's "most interesting dead guy" mascot. He's featured on the label for their whiskey, along with the distillery's merchandise and Brunett's Fender Telecaster guitar, which sits in his office when not in use during the other half of Brunett's life, playing music. Over the years, Brunett has played with musicians like George Thorogood and Charlie Daniels — and Billy Gibbons from ZZ Top is a big fan of Iron Smoke's whiskey.

Iron Smoke products are currently only available in New York State because they can't keep up with demand — Burnett receives requests from as far as France and England. Sales in New York City have taken on a life of their own, Burnett says, they can't keep it on the shelves. So why not go bigger? "We're purists," Brunett says. "We don't want to blend our whiskey with any other product just so we can do a bigger volume."

Brunett attributes a lot of the company's success to the Rochester community. "It's the old 'puttin' up a barn' mentality here," Brunett says. "Everyone helps out to make it come together. I love Rochester and the collaborative effort to make art and everything else here."

Scott Stanton and Teal Schlegel were sitting on Stanton's patio, some time ago, enjoying a glass of whiskey when Teal looked at his glass and said, "I can make this." By July 2015, Stanton and Schlegal had opened Honeoye Falls Distillery (165 West Main Street, Honeoye Falls). The distillery is owned by Stanton, Dana Stanton, Schlegel, and Todd Marshall. 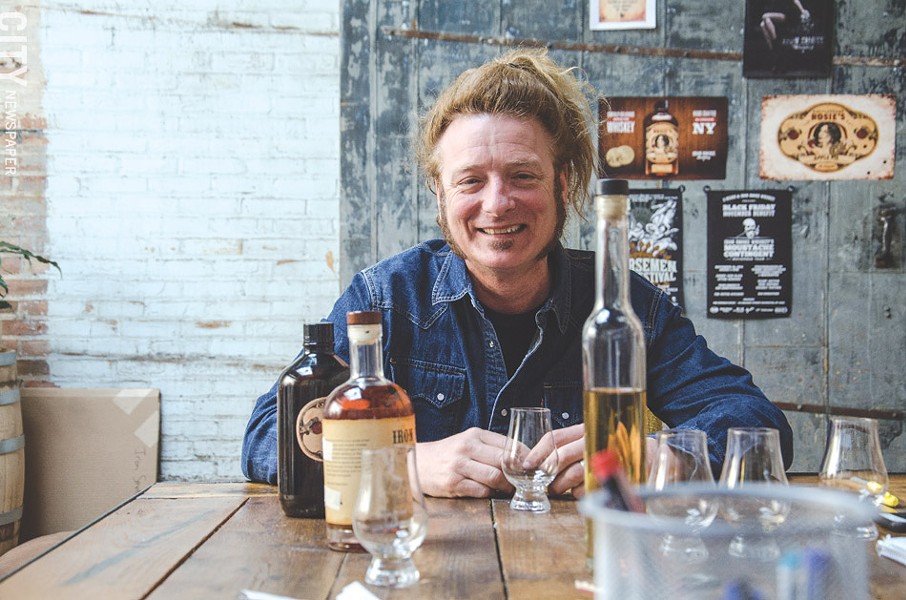 Schlegel is the Head Distiller and has a background in biochemistry and worked as a botanist. "His background is a big differentiator between us and other farm or small, craft distilleries," Stanton says. "There's a lot of trial and error and we were fortunate that we didn't have a lot of that; we put a good product out from day one and it's really helped us grow."

Honeoye Falls Distillery currently produces gin, vodka, and moonshine. All of their products are made from a mixture of 85 percent rye and 15 percent malted barley. The rye is sourced from the farm right behind the distillery — the farmer drives it over in a tractor. The Devil's Bathtub Gin — which is finished in a cucumber bath to smooth out the taste, a process similar to what Hendrick's Gin does — is one of its most popular products.Two new products, a rye whiskey and a high rye bourbon, will be available in May and are currently aging in American new oak barrels.

Stanton and his partners researched the history of rye after choosing it as their main grain. "Not only was it a New York product," Stanton says, "but before prohibition all we drank were rye-based spirits, from colonial times right up through prohibition. Tastes started to change after prohibition, imports became more popular and rye-based spirits kind of went out of favor — but we are currently experiencing a rye revival."

The distillery is currently producing about 6,000 bottles a month, and their products are sold in around 500 locations in Rochester, Buffalo, Syracuse, and Albany.

The prohibition theme extends to distillery's tasting room, The Farmacy, which is open to the public Wednesday through Sunday. Adam Peterson, bar program director and executive chef at the distillery, has created a craft cocktail menu that features not only Honeoye Falls Distillery spirits but also products from other local distilleries like Glenrose Absinthe from North Rose, and Black Squirrel Aged Spirit from Buffalo. The tasting room also serves beer from Swiftwater and Lost Borough breweries. They are currently building a kitchen where Peterson will create a menu of upscale bar food like pork belly pot stickers and beef shot rib empanadas.

When Jason Barrett of Black Button Distilling (85 Railroad Street) was working in Washington, D.C., one of his clients was Catoctin Creek Distilling Company.

"They pretty quickly noticed that whenever they called with a question I would say, 'It would be a lot easier if I could explain this in person — can I come out tomorrow?'" Barrett says. "Any excuse I could have to go out and see them."

At the time, Barrett was brewing his own beer at home and found that making beer translated well to making whiskey. Barrett had the knowledge of the financial side of distilling from his job; Catoctin Creek taught him the production side. After a few months Barrett quit his job, sold his house, and went to a master distilling course on the West Coast before moving back to Rochester and opening Black Button.

Vodka was the first product that Black Button released, and the line has grown to nine products, including a Bespoke Bourbon Crème and a Fast Ferry Fernet. With more product comes the need for more people and Barrett is now running a staff of 27.

Barrett offers a three-day course in distilling three times a year for those that are interested in producing their own liquor. "The education piece is really important because obviously if you don't do it safely and make good product, that's not good for anybody in the industry — plus we get to meet a lot of interesting people; it's fun."

Black Button is distributed on the East Coast from Maine to Virginia, and in Michigan and Georgia as well. Most of its business is done in New York State, with 30 percent in Western New York. The biggest sellers are the Citrus Forward Gin and the Bespoke Bourbon Cream, and Black Button offers a Lilac Gin that comes out right around Lilac Festival time. "The liquor industry is still changing and it hasn't really caught up to where beer is," Barrett says. "Breweries usually have their staples and then they do seasonal stuff — we'd like to see that happen in spirits as well."

Barrett calls the tasting room the "heart and soul" of the distillery. "It's how we connect with consumers and where we experiment with things."

The tasting room is open Tuesday through Friday from noon to 6 p.m. for tastings and from 6 p.m. to 9 p.m. on Thursday and Friday and 9 a.m. to 5 p.m. on Saturday they are doing cocktails, tours and tastings.

City asked local distillery owners about the future of distilling in Rochester: Will the industry continue to grow? How many more can the area handle?

"There's enough room for everybody. I think it's gonna grow, everyone's going to put out the best product they can and put the passion into it, and then everything else happens. You've got Susan B. Anthony and Frederick Douglass, and even Rattlesnake Pete and Sam Patch; there's this kind of energy around here. There's great restaurants and a great service industry. There's stuff going on downtown that I never thought I would see. I say go for it." — Tommy Brunett, Iron Smoke Whiskey

"I think there's room for more. There's people doing different things — it depends on what you're specializing in. It's a very small, close-knit community: We all know each other and we all try to help each other." — Scott Stanton, Honeoye Falls Distillery

"I think the industry will continue to grow, but I think we're going to see ebbs and flows just like we have in beer. There are so many people getting into it right now, the market is a little bit saturated. I'm trying to advocate for people to diversify and make something unique. If you get into this business because you love making product and you have a passion for it, it's a great industry to be in. If you're getting into it because you want to make millions of dollars ... I don't know that that makes a whole lot of sense." — Jason Barrett, Black Button Distilling