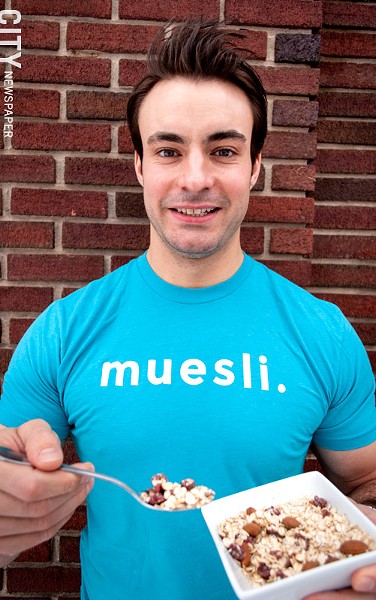 If you're feeling a little weighed down after the annual holiday cookie exchange and one too many champagne toasts, a local health foods brand has a few ideas about how you can set yourself straight in 2018 — by starting with breakfast. Evoke Healthy Foods has been making natural and organic muesli since 2011, and has grown from a single stall at the Rochester Public Market to a national brand with products in some 2,500 stores. Founder and President Ian Szalinski says a bowl of muesli is a nutritional powerhouse that can keep anyone full and energized throughout the day.

A popular breakfast staple in much of Europe, muesli — which means "mix" in Swiss German — is a blend of whole grains (typically oats), fruits, nuts, and seeds, which is eaten cold with milk or yogurt, or cooked like oatmeal. Though it may bear close resemblance to granola, don't be fooled — granola gets its crunch from being coated in sugars and oils and baked, while muesli is comprised of entirely raw ingredients. It was originally invented around 1900 by Swiss physician Maximilian Bircher-Benner as a dietary supplement for his patients.

Evoke's line of muesli range from the Classic Swiss blend of oats, raisins, almonds, and cranberries to more modern combinations. The Antioxidant muesli contains superfoods like cacao nibs, goji berries, and walnuts, while Athlete Fuel adds in pumpkin seeds and cashews. Most of Evoke's muesli products are certified organic and several are gluten-free.

Compared to conventional American breakfast cereals, muesli is a nutritionally dense food loaded with fiber, protein, and complex carbohydrates, Szalinski says. The recommended serving size for Evoke muesli is just one-third of a cup, a stark difference from other cereals which may allot a cup or more per serving. "If you put a cup of Special K in a blender you'll see it's all air," he says.

Szalinski himself first encountered muesli in high school, when he participated in a snowboarding competition in Switzerland. Muesli was served every morning, and he found it to be ideal for fueling his active lifestyle. Back home, Szalinski says he found few muesli options on American shelves, and those available were low-quality versions that were heavy on sugary dried fruits. He would often make his own additions at breakfast, adding nuts or seeds, but saw there was a bigger opportunity in the market to bring more diverse types of muesli to the cereal aisle.

Szalinski founded Evoke (then called Muesli Fusion) in 2011, when he was just 23. He rented production space on Atlantic Avenue and began selling muesli at the Rochester Public Market in February of that year. As owner-operator, Szalinski handled everything from production to packaging and marketing. He remembers his first sales day well: in the freezing rain, he sold seven bags of muesli and says he felt "absolutely ecstatic."

In his first year of business, Szalinski had some early success selling his muesli to health food stores both locally and nationally. His story was picked up by National Public Radio, sparking what he says is still his biggest-ever day of sales. Since then, his business has continued to grow. In 2014, Muesli Fusion rebranded to become Evoke Healthy Foods — a move which Szalinski says leaves the door open for the brand to go beyond muesli. And the business has received outside investment, including $50,000 from Buffalo-based venture development organization Launch NY.

Szalinski anticipates even more growth as muesli starts to go mainstream, helped along by food trends that emphasize whole foods and eschew sugars, preservatives, and unpronounceable additives. Still, he's aware that for many American consumers, muesli is an unfamiliar product. Helpfully, each bag of Evoke muesli is printed with suggestions about how to eat it. The most straightforward approach is to soak the cereal in milk overnight for a creamy, ready-to-eat breakfast, but it can also be sprinkled into smoothies and baked goods.

Evoke is no longer a one-man show, but Szalinski still keeps his operation slim. He works remotely with two sales reps and outsources muesli production to three contract manufacturers in Albany, Atlanta, and Wisconsin. He himself keeps Evoke muesli at his desk and eats it twice a day, every day, for breakfast and as a snack. He says he doesn't get tired of it, and doesn't think other people will either.

"People are very habitual about breakfast," Szalinski says, noting that while we may seek novelty and variety in lunch or dinner, most don't have any issue with eating a similar breakfast each day. When you're trying to get out the door to work, it helps if your breakfast is quick and convenient, he says. To that end, Evoke launched a new line of single-serve muesli packs this past summer in flavors like Cocoa Cherry Chia and Cinna-muesli.

Evoke's muesli is sold in grocery stores (including all Wegmans stores) all over the East Coast from Massachusetts to Florida, and as far west as California. Locally, you can also find Evoke at Hart's Local Grocers, Abundance Cooperative Market, and Lori's Natural Foods.