A thin film of dust covers the floor in the main foyer of the old Irondequoit Mall. It shows no footprints and generally gives the impression that nobody's been through the place in a while. That's not surprising: the mall has been closed to the public since 2009, except Macy's and Sears, which owned their own space and closed more recently.

The complex, last known as Medley Centre, is a dormant 916,000-square-foot shell of brick, concrete, metal, and glass. It's a ghost town. Signs still hang over the shops: the unilluminated gray glass tubes of the Subway logo, the gold World of Science lettering. The iconic carousel and a children's play area are quiet and still.

These things are relics from the shopping center's brief and rather tragic life. Wilmorite opened it in 1990, around the peak of America's love affair with malls. A subsequent out-of-town owner, developer Scott Congel, shut it down in 2009, ostensibly to redevelop it into a grand shopping and entertainment destination that never materialized. Congel failed to follow through on promised investments and exhausted almost every bit of goodwill that locals extended to him. 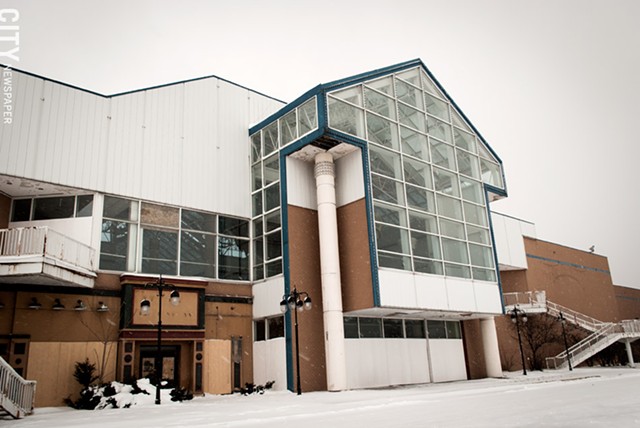 The mall's past is sad, but its future is unwritten. Former Irondequoit Dodge co-owner Angelo Ingrassia bought the mall at auction in 2016; a court had ordered the Monroe County Sheriff's office to seize and sell it in order to pay a debt Congel owed.

Ingrassia, who is partnering with developers Frank Perticone and Robert Morgan, picked up Irondequoit Mall-slash-Medley Centre at a pivotal moment for malls. The partners rolled out their vision for redeveloping the complex during a press conference in late August. Skyview on the Ridge, as it's now called, will remain a commercial center, but the plan is to make it into something other than a shopping mall.

"We are ready to adapt this space to whatever a company needs," Ingrassia said in a press release handed out during the August announcement for Skyview. "We are offering 'flex space' and can build to specifications. With trends moving away from traditional in-store shopping to online buying, we know that companies will need more distribution centers and warehouse locations for their products. We can combine office space, light assembly, distribution, and warehousing all in one location."

For the first phase of the project, the developers plan to divide up the anchor spaces and a 300,000 square foot wing to suit the needs of new tenants. Flaum Management did something similar when it bought the former Macy's building in 2014, after the store closed. The firm now leases it to Conduent, which uses the space for a call center. 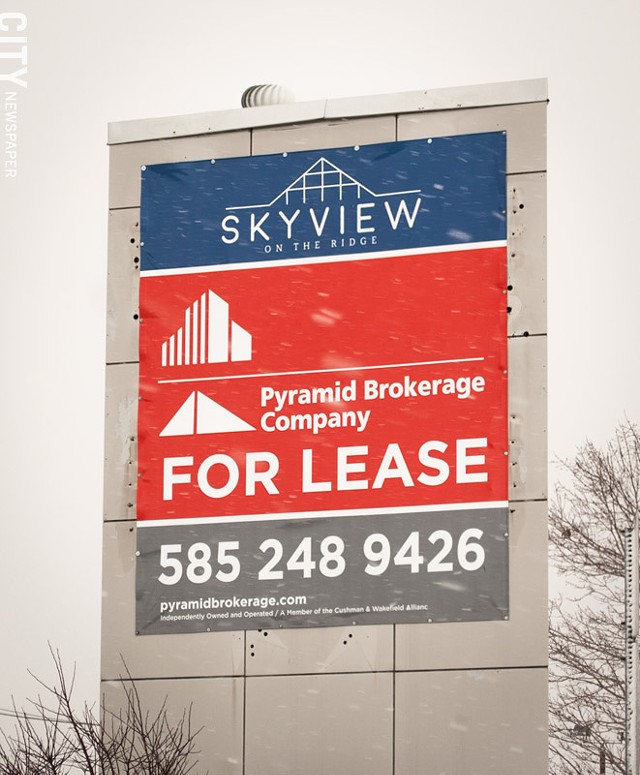 Skyview's developers are talking about transforming the renovated and reconfigured spaces into creative office layouts with shared meeting and work areas; with cafes and coffee shops; and possibly with restaurants, child care centers, a fitness center, or a movie theater.

Skyview will even house the Town of Irondequoit's new community center, since Ingrassia and company are donating 50,000 square feet for it. The space spans both levels and has its own entrance on the East Ridge Road side of the complex.

Officials are clearly excited about the opportunity, and it is a symbolic win for the town. It's finally getting something tangible out of the dead mall that's caused it, and its residents, so much frustration.

Assembly Majority Leader Joe Morelle and Senator Rich Funke have secured a combined $2.1 million in discretionary funding for the project, which they announced in December. The town has already hired architectural consultants and put together a community advisory board to help steer the project. Officials expect to release an initial plan for the center early this year.

"We've always seen the need, but we've never been able to get off the starting line," Irondequoit Supervisor Dave Seeley said during an event inside the Skyview shell announcing the community center funding.

But the donation also provides a practical benefit to the developers: an anchor. The community center will bring a steady stream of people into the complex and add a sense of vibrancy that could prove attractive to companies looking for an office location, as well as any restaurant or retail business eyeing space at Skyview.

Ingrassia declined an interview request from CITY, just as he has requests from other local media. Outside of Ingrassia's remarks during the August press conference, he and his partners have said little about Skyview, even though it's getting $2 million in state economic development grants to help with the project's $11 million first phase.

The plans Ingrassia, Perticone, and Morgan have for Skyview aren't some kind of moonshot. Developers and mall owners across the country have successfully repurposed dead or dying malls for all kinds of uses. Google has office space in Mountain View, California, that was once a dead mall.

Simply put, the owners adapted, which is what Ingrassia, Perticone, and Morgan are trying to do with Skyview.

"These properties, while they may not have the same opportunity for retail that they once did, they still are strong properties that can serve different needs," says Jonathan Murray, director of marketing and research for the Rochester office of global real estate firm CBRE. "In the case of Medley Centre, you've got large boxes on the ends that can accommodate a large office user or perhaps some kind of light industrial use, or a community center, I guess. It's something that we are seeing in lots of different communities." 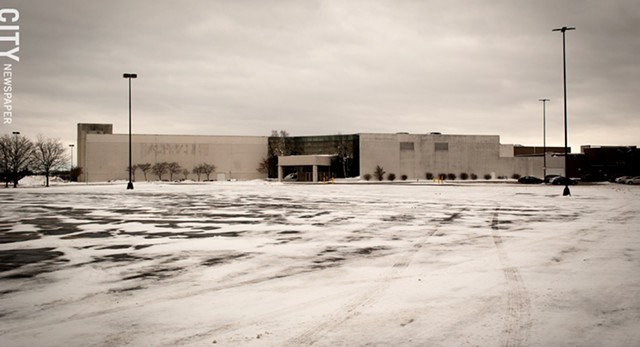 Big news organizations in recent years have devoted a lot of ink and screen space proclaiming the death of the mall or a retail apocalypse. But really, only some malls are dying.

A report by Fung Global Retail & Technology, a well-known retail research and analysis firm, says that larger, high-end malls are performing well and will continue to. In other words, Eastview Mall probably isn't going anywhere soon. The Fung Global analysts also say, however, that they believe about 30 percent of US malls – primarily smaller, underperforming centers – need to close.

Jonathan Murray, director of marketing and research for the Rochester office of global real estate firm CBRE, explains the problem simply. The United States reached a point about 20 years ago where it was overbuilt with mall space. A lot of the malls that had been operating on the fringe for years just haven't been able to make it.

And that's partially what happened with Irondequoit Mall and its Medley Centre successor. Sure, Irondequoit Mall was hurt by public perceptions of crime, but both iterations were done in by the rise of Greece Ridge Mall and the construction of a big, new retail plaza in Webster. A succession of owners just couldn't turn the Irondequoit mall into something that could compete.

The odds that Skyview could come back as a traditional shopping center were small anyway. Malls as a whole are at a point where they need to evolve. We're all pretty familiar with the basic story of present-day retail, the one in which online shopping has completely reshaped the way consumers buy clothing, electronics, sporting goods, cars, books and music, and even groceries. It's the same story in which Amazon's annual sales more than doubled from $61 billion in 2012 to $136 billion in 2016.

Some of the big department store chains that serve as traditional mall anchors have been shutting down stores and pulling out of markets entirely. And when they leave, mall owners need to figure out ways to fill the space.

When Bon Ton pulled out of the Rochester market, Wilmorite recruited Von Maur to open a ritzy store in Eastview. In Marketplace, Wilmorite didn't fill the former Bon Ton with another store; it signed on a go-kart raceway as the new tenant. 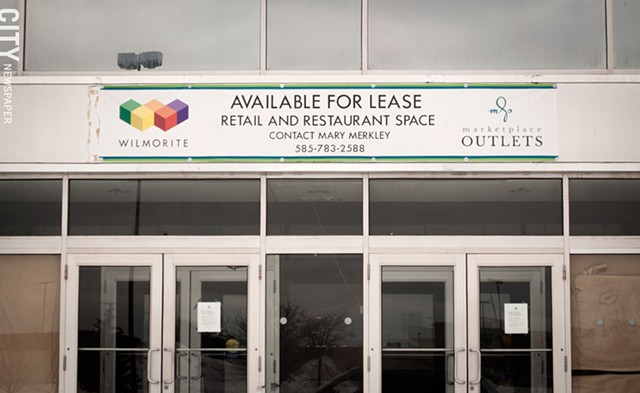 Wilmorite is now transitioning Marketplace into an outlet mall, a move meant to seize on the mall's existing success as a shopping destination and growing consumer demand for "brand name merchandise at substantial savings," the company said in a 2016 press release.

"Outlet shopping is the only growth sector in bricks and mortar retail due to its strong appeal to a wide range of demographic audiences from millennials to shoppers in their mid-40's and beyond," Outlet Resource Group principal Lisa Wagner said in that same release. Wilmorite hired that firm to help with Marketplace's transition.

The switch actually positioned Wilmorite to absorb the recent loss of Macy's, which closed its store in late 2017. Wilmorite bought the property, which Macy's owned, and plans to break the space up into smaller outlet stores. It did something similar at Greece Ridge when Bon-Ton left, converting the 145,000 square foot box into 27,000 of store and restaurant space.

The company seems to have found a formula that works at Eastview. It's done a few expansion projects over the years and regularly adds new upscale retailers. The area around Eastview seems to be very attractive to retailers, as well, says CBRE's Murray.

So what does the future hold for malls? There is no one answer, but plenty of well-informed people have thoughts.

The analysts at Fung Global note that online retailers such as Amazon and Warby Parker have opened physical stores, and they expect other "e-commerce" companies to do the same. Likewise, they expect big retail brands to keep pushing into online sales.

Fung and other industry trend watchers expect that online retail will level off, since some consumers prefer to shop at stores out of convenience and a sense of reassurance. Stores allow customers to get their purchases immediately, and they also offer a simple, direct way to return purchases.

The International Council of Shopping Centers, a trade group, points to consumer surveys that show customers spend more money with retailers who have a nearby physical presence. Shoppers also consider whether a retailer has a store nearby before they make online purchases. Those attitudes could work in physical retail's favor.

And as online sales grow, sellers are giving more thought to the so-called last mile of delivery. Plenty of retail number crunchers see a role for brick and mortar stores to serve as collection points for customer orders. Click and collect, as the practice is often known, is a way for sellers to cut down on the time and expense of getting an item to a customers, the ICSC argues. 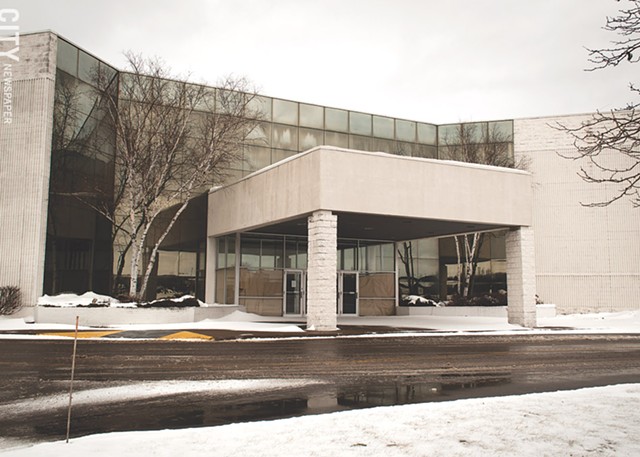 These national and global trends matter for Rochester's malls, which will see any trends and changes trickle down into their stores and tenant mixes.

The region's retail real estate market is performing well presently, Murray says. The amount of retail space has remained relatively flat, and the vacancy rate at the end of 2017 was lower than at the end of 2016, he says.

Still, should any of the local malls lose their viability, they don't have to sit idle or become burdens on communities.

Retail is "a demand-driven business," Murray says, "and if there isn't demand for retail at a specific location, you still have this piece of infrastructure, this building, that can satisfy a lot of alternative uses. So it comes down to the owner getting creative and figuring out what will work."