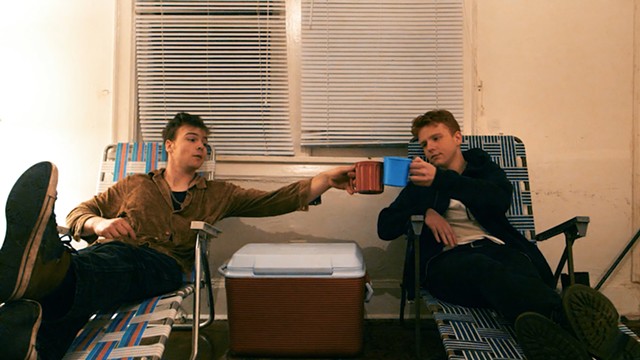 In the past several years local musician Austin Lake has built a name for himself, with his flashy and genre-bending solo project Aweful Kanawful. Lake is now translating that aesthetic into filmmaking with his quirky and zany feature-length movie, “A Pharaoh’s Lonely Ego,” which will be available to stream for free starting Sunday, Feb. 14.

Filled with surreal imagery, cheeky humor, and fantastic original music, this indie flick is a bizarre and paranoid fever dream with absurd one-liners and seemingly irrelevant characters, filler, and subplots that flesh out the chaotic world Lake has created in his music.

Inspired by old horror movie camp, classic dark comedies, and a touch of “Trailer Park Boys,” “A Pharaoh’s Lonely Ego” experiments with the interests Lake has had since he was a kid banging away at a drum set with Spaghetti Westerns playing in the background.

Lake’s story explores the misadventures of a fallen pop star, using Rochester as the film’s overcast underworld. Scenes in the film were shot in some recognizable local businesses, including vegan eatery The Red Fern and lower Monroe Avenue favorite Marshall Street Bar and Grill.

Much like his music, Lake’s film takes on a variety of different forms, with its mixture of melodrama and comedic horror. The story centers on struggling pop star Arny Kanawful (played by Lake himself), one-half of the musical duo the Kanawful Brothers. When Arny’s fame and luck begins to run out, his brother and singing partner Robby (played by Lake’s real-life brother, Brendan) signs a solo deal.

From then on out, Arny’s life shifts into a Shakespearean dimension of tribulations that include marital conundrums, drinking in despair, and suicidal tendencies. He spirals into madness as, in a strange turn of events, he gains a nemesis in the form of the villainous owner of a chicken processing corporation who’s plotting the next big thing in televised entertainment. 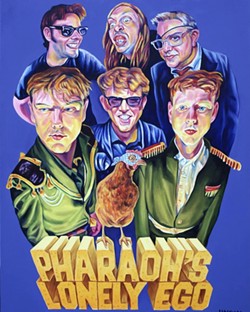 Throughout the story, Arny is fed glimpses of hope, fame, and recognition through continuous scams led initially by his managers, then friends, and later by Willy, the villainous and buck-toothed head of the chicken processing company Buck Buck’s Chicken. A one-eyed man called Prospector Yukberger is hired by Willy to kidnap and brainwash celebrities into endorsing his brand, and cover up the true nature of his “chicken” production.

The film’s villains are obsessed with finding their “golden goose,” who they believe to be the washed up Arny Kanawful. From this point, the film takes on a fast-paced, hallucinatory rhythm laced with sadistic survival television, gang rivalry, and plenty of other bizarre twists.

The cast is packed with other members from Rochester’s music scene, including Pat McNally of The Fox Sisters, Beef Gordon, and Lake’s bandmates from His Rubber Husband’s Band, making the film a local indie music insider’s playground.

Lake says that over the years, he has striven to combine his creative passions of music and film in his music videos, but that he always wanted to make something more substantial. Three years in the making, the film serves as a transition from one artistic medium to another, its non-sequitur title drawn the very first tape Lake released, in 2014.

“I wanted to make an adventure biopic about a fictional pop star,” Lake says. But he was met with the temptation of another twisted scheme, “which was to put all of my friends into some...situations,” he says.

Those peculiar situations include indulging in ridiculous fashion designs or wearing practically nothing, and the cast is faced with a succession of outrageous scenarios. Lake’s friends were given misfit roles, portraying character tropes such as greedy music executives, eccentric villains, and hunchback manservants.

“I'm infatuated with Hollywood but I'm also a big believer that everybody has this spark within them to perform,” Lake says. “I wanted to see if 52-some-odd people, who have never acted before, could still tell a compelling story.”

The shaky camerawork, choppy editing, and amateur acting all add to the DIY charm Lake brings to his projects. “A Pharaoh’s Lonely Ego” leaves a lot to be desired in the technical territory — it could’ve used some umbrella lighting, better wigs, and more stunts. But above all, the strange visual feast is just a whole lot of fun; it’s like if psych-rock musician, performance artist, and filmmaker Tav Falco directed an Ed Wood-style horror-comedy, but without the special effects.

“I hope this film at least leaves a trail of laughter and mischief in its wake,” Lake says. “But at best it puts a bunch of folks who are very dear to me in a time capsule we can all enjoy.”

Joe Massaro is a freelancer for CITY. Feedback on this article can be directed to Rebecca Rafferty, CITY’s life editor, at becca@rochester-citynews.com.