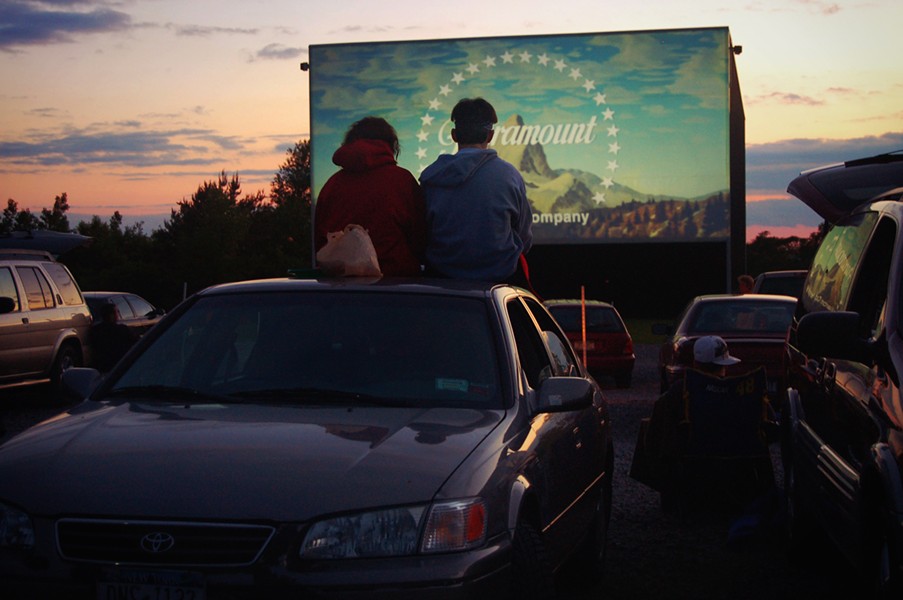 PHOTO BY MATT DETURCK FOR CITY NEWSPAPER, 2008 Leah Provenzano and Jon Eckler prepare to watch a screening of "Indiana Jones and the Kingdom of the Crystal Skull" at the Vintage Drive-In in Avon, NY.

A glimmer of hope amid the COVID-19 crisis appeared earlier this week when Governor Cuomo announced that the Rochester region had met requirements to begin the first phase of a reopening process. There was even more reason to celebrate for film fans, as drive-in movie theaters were among the first group of businesses given the go-ahead to resume operations.

Since drive-in attendees are isolated within their own vehicles for the duration of the film, drive-ins can provide a safer alternative to the enclosed communal setting of traditional movie theaters. The announcement is good news not just for the area’s drive-in theaters, but for those of us who’ve exhausted our viewing options on Netflix and are ready for an activity that will get us out of the house.

For drive-in theaters, the re-opening process won’t be without its difficulties. Not the least of which is the fact theaters haven’t been provided with specific safety regulations or guidelines. They’ve been left to their own devices in deciding how to operate within the restrictions of the coronavirus pandemic, while ensuring patrons have as safe an experience as possible.

Rick Stefanon, owner of the Silver Lake Twin Drive-In Theatre (7037 Chapman Avenue, Perry), says he’s been in contact with the local health department and is making every effort to be cautious.

Set to open to the public this Friday, May 15, Silver Lake will be the first theater to test these uncharted waters. The theater will stick to the government-recommended practices, asking patrons to use their best judgement and common sense, Stefanon says.

“Honestly, if people continue to follow protocol and the guidelines that the government set — such as social distancing and masks, that type of thing — I don’t think there will be any problem,” he says.

The venue has enacted a number of new protocols: the outdoor playground will be temporarily closed and each screen will have a reduced parking capacity, allowing for additional spacing between vehicles (at about 10 to 12 feet). Stefanon is also asking everyone to wear a mask if they exit their vehicle.

Staff will be stationed outside both the snack bar and restrooms, allowing only a set number of people to enter at a time and ensuring that the areas are continually cleaned and sanitized.

“We feel fortunate we're one of the first businesses that's been able to open up to the public,” he says. “So we're grateful.”

Dean says the theater is still setting their safety precautions, but will be limiting screens to half capacity, keeping the bathrooms continuously cleaned, and sticking to standard physical distancing guidelines. He’s also asking patrons to wear masks if they choose to use the restrooms or concessions stand.

The other major hurdle the theaters face is the prospect of programming a slate of films when most studio pictures have vacated the summer movie season, or have been pushed off to the fall or into next year. Currently, no new films are scheduled to open before July 1, when the Russell Crowe thriller “Unhinged” will hit theaters. The next release after that will likely be “Tenet,” the highly-anticipated new film from director Christopher Nolan, which is scheduled to open July 17.

The lack of new releases from the major studios will require some creativity in scheduling and occasional backtracking of releases. Opening week screenings at both the Vintage Drive-In and the Silver Lake Twin will be “Trolls World Tour” and “Jumanji: The Next Level,” which was released in December. The second screen double feature will be this spring’s “The Invisible Man” paired with “Bad Boys For Life.”

Though they’ll be aiming to show new releases as much as possible, both Dean and Stefanon say they’ll likely mix things up and expand out to screenings of some older film favorites.

Film screenings — even outdoor ones — are likely to be different for some time, and it will no doubt take some getting used to. The new safety measures are going to require a bit of patience and consideration from everyone, but Stefanon is optimistic. “If everyone’s conscious of the rules and the guidelines they've been practicing for the last month-and-a-half, I think it will be a smooth transition.”

Tickets must be purchased in advance, and an ordering system is in place for contactless concessions. Outside food and drink is allowed, though alcohol is prohibited. Masks or face coverings will be required at all times when outside a vehicle. Restrooms will be available, with occupancy restrictions. If there is a line, guests will be asked to maintain the 6 foot physical distancing guidelines and utilize designated floor markings.

Programming for the venue is still being set, with the website promising a lineup of retro film screenings, as well as music, live sports, comedy. A schedule of upcoming films and events will be announced in the next week.

Adam Lubitow is a freelance writer for CITY. Feedback on this article can be directed to CITY arts & entertainment editor Rebecca Rafferty at becca@rochester-citynews.com.