July 07, 2020
Beer and death metal go together like a grown-up’s peanut butter and jelly. The truly hallowed duo of unfettered indulgence is as likely to strike a primal nerve deep in your gut as it is to cause utter confusion in your mother.

In pre-COVID times, a sweat-soaked venue swirling with blast beats and flailing bodies was the haven for that experience. While physical distancing has made that impossible, University Avenue’s Nine Maidens Brewing Company has teamed up with local death metal trio Undeath to offer a different kind of beer and metal fusion — an IPA as black as the most Nordic of metal.

The beer itself is a classic New England, pumped full of Citra hops. But along with the abyssal hue, the brew received a second dose of metal during the brewing process. As Zimmerman pitched the yeast, guitarist Kyle Beam chugged out riffs through a heavily distorted Marshall stack directly beside the fermentation vessel. 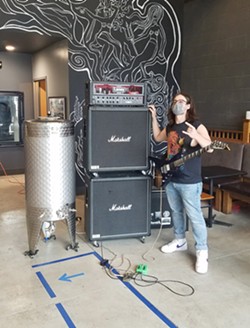 Zimmerman, an aficionado of Viking lore, likened it to a version of the gjærkauk, an odd tradition in the Stjørdalen valley of Norway where brewers scream at the yeast as it’s added to the unfermented wort.

“The idea is you scream at yeast in order to give it vigor,” Zimmerman said. “So we figured we’d just play heavy metal riffs at the yeast while we pitch it.”

Beam, along with Undeath’s vocalist Alex Jones and drummer Matt Browning, had long been regulars of Nine Maidens. The odd collab, he said, just sort of popped up out of the blue.

The new beer release, set for Friday, coincides with the release of Undeath’s new single “Lesions of a Different Kind.”