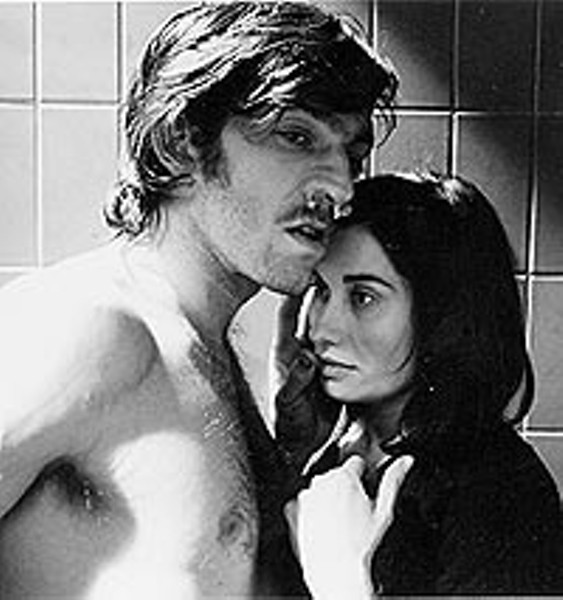 If Owning Mahowny wasn't a real story of a gambling-addicted, bad-luck protagonist who was ultimately incarcerated for embezzlement, its sequel might have been The Cooler (opens Friday, January 16, at the Little). This one is about a former casino junkie who parlayed his monumental bad luck into a gig where he's paid to stand near hot gamblers in an attempt to quell their good fortune. It's funny that both of these films starred Hollywood's two biggest sad-sack performers --- Philip Seymour Hoffman and William H. Macy, respectively --- who are each so heartbreakingly believable in their Eddie Mush-esque roles, you can't imagine anyone else tackling their parts.

Unfortunately, Hoffman and Macy have something else in common (besides appearing together in David Mamet and P.T. Anderson films). They're trapped in pictures that are, as a whole, rather disappointing. If you're looking for a strong movie about gambling, luck, and the ability to affect the fortunes of others, do yourself a favor and seek out Juan Carlos Fresnadillo's far superior Intacto. But if you're afraid of subtitles, keep reading.

Macy plays Bernie Lootz, the "cooler" for the fourth-rate, old-school Golden Shangri-La Casino in Las Vegas. Bernie walks with a limp because somebody whacked him in the knee when he couldn't pay a staggering gambling debt years ago. Since then, Bernie has been working off the debt at the Shangri-La and has only one week left before he's square with his creditor.

The cooler thing, in case you're wondering, refers to Bernie's ability to jinx gamblers who happen to be on a particularly good run just by touching them or standing in their vicinity. If someone's luck has just headed south, Bernie is bound to be found, Zelig-like, somewhere in the nearby crowd. The Shangri-La's manager, Shelly Kaplow (Alec Baldwin) pays Bernie to hobble over to "hot" tables and "cool" them off.

The main story in The Cooler involves Bernie and Shangri-La cocktail waitress Natalie (Maria Bello) striking up a strange sexual relationship. Suddenly, the unlucky guy with dead houseplants, a missing cat, and the inability to get cream for his coffee at the casino bar is sitting on top of the world (and he sits there naked more than once --- I've seen enough of Macy's backside to last me a while).

Thanks to the apparently magic sex, Bernie's luck has taken a 180-degree turn. But he still has many an obstacle to overcome, including the re-appearance of his estranged son (Shawn Hatosy) and his pregnant fiancé (Estella Warren), as well as the sudden grumpiness of Shelly, who is also being hounded by corporate casino types (led by Ron Livingston) bent on modernizing the Shangri-La. Shelly does, however, gain the superpower of x-ray vision at some point during the film, but that's a whole 'nother story.

Debut writer-director Wayne Kramer, who co-wrote the script with first-timer Frank Hannah, has the difficult task of giving The Cooler both a hard (the rough-and-tumble world of Nevada gaming) and soft edge (the off-kilter romance between Bernie and Natalie). Admittedly, this is not an easy thing to do, but Kramer doesn't come close to nailing it. Instead, we get Mamet-Lite® dialogue in the form of empty yet forcefully delivered speeches (mostly from Baldwin, who is just doing the Mamet shtick from Glengarry Glen Ross, with largely less aplomb) and sex scenes with full-frontal nudity that appear to be included merely to titillate.

There are certainly worse films than The Cooler, but for an indie flick with this kind of cast and a holiday release date and buzz (read: Oscar bait), you would expect something with a little more oomph than this.

Do you know where they no longer wonder, "What would happen if you stuffed Microcosmos and Godfrey Reggio's Qatsi trilogy into a burlap sack and swung 'em around like a lasso?" Hungary, that's where. György Pálfi saw fit to satisfy their curiosity. The writer-director's first full-length feature is Hukkle (screens Saturday, January 17, at the Dryden Theatre), a 75-minute, dialogue-free peek at the routine (and, hopefully, slightly less routine) goings-on of a tiny Hungarian village.

The daring and unusual Hukkle, which is pronounced "WHO-kel" and is the Hungarian equivalent of the word "hiccup," has a lot of fun showing us various extremes in both filmmaking techniques and in the activity of its setting. We see the bustle of both ancient (sheep herding) and modern (textile mill) economy.

We see long shots where Pálfi's camera slowly pans across his subjects from a distance, while others are taken from so close up, you might wish you were sitting in the back row (especially the shot showcasing the giant, bouncing pig testicles). Some bits are in slow motion, and some are sped up to the point where you can see plants grow.

Pálfi also shows us the cycle of life via both the food chain (man eats the fish that ate the frog) and in a much more agricultural sense (wheat is harvested and becomes the flour added to a delicious chicken casserole after spinning through a packaging facility). That's cool. But did I mention Hukkle is also a murder-mystery? And a darn nifty one at that. One you may need to see a second time to grasp it all.

If you momentarily take your eyes off the screen, like to ask your date if they think the close-up of the pig balls was absolutely necessary, you might miss one of Pálfi's subtle clues. But even if you don't get one of them, Hukkle is still perfectly enjoyable and interesting seen solely as a documentary.