Life » Barfly on the wall 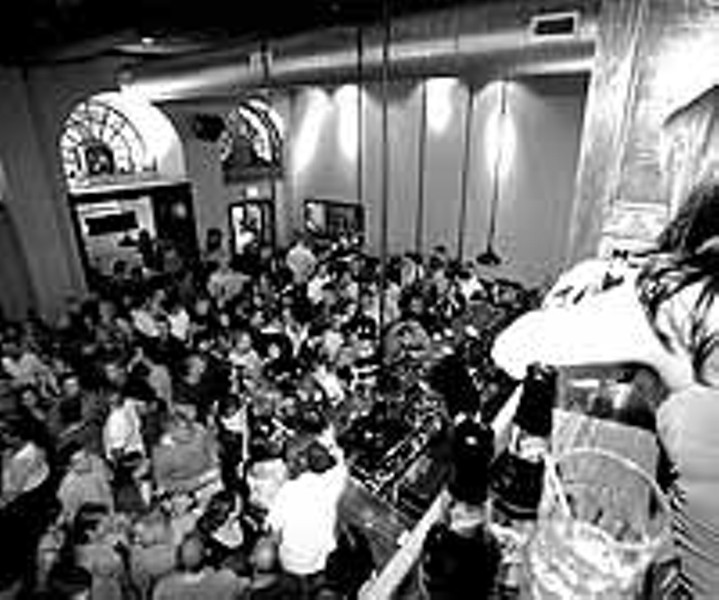 I first heard the buzz about Barfly from a bartender at Lola, the bistro on Monroe Avenue. It had opened the night before, he said, and a swarm had formed for the occasion. That'll happen when a hip hangout drops on the scene, especially at East and Alexander.

Lola and Barfly are both owned by John Diamatopoulos. He's also the guy behind J.D. Oxford's Pub, the sports bar adjacent to Lola, and Karma, a swank nightclub next to Barfly. Unlike Lola and Oxford's, Karma and Barfly actually adjoin when the former opens on Thursday, Friday, and Saturday nights.

True to its name, Karma appears to be manifesting itself according to the actions of influential people --- in this case, the cocktail and Corona crowd that goes there. Maybe it's the recession, but Karma's high-class atmosphere has been a little more like the High Life of late. All the same, baseball caps and torn or unkempt clothing are still strictly verboten.

Given its proximity to Karma and the pedigree of its sister establishments (including the comparatively mongrel Oxford's), it was probably inevitable Barfly should turn out to be a sports bar with high-class aspirations.

For example, the main bar has not one or two, but four "top shelves," back-lit against an opaque panel. The predictably pretty girls behind the bar have to climb a wooden ladder several feet to reach the most expensive, exotic bottles. (Ladies, beware of men in Barfly who order shots of stuff like Patrón, a pricey tequila perched on the truly top shelf. They're probably perverted housepainters who get their sick jollies watching women climb up and down the rungs.)

Barfly also has two tables set in nooks by the front windows, each of which give up to four people the illusion of privacy. It's illusory because, seen from the street and lit by a hanging lamp, anyone sitting there looks like an animated mannequin in a museum display depicting nightlife in the early 21st-century.

But by 10 p.m. on most nights, the place starts to fill up with singles and the primary pastime becomes the mating game. When Karma's open, preppy guys and the well-dressed women who love them flit about between the two contiguous establishments. This is destined to further dilute Karma's air of exclusivity, which most people I know consider a good thing.

The music at Barfly, provided via satellite or a DJ on popular nights, consists of hard rock hits, mainstream "alternative," and Top 40 HipHop. The songs are all urgent, yet predictable --- like, I suspect, the sex lives of most of the patrons. And when the place gets packed, they're played loud enough to make any conversation intense, yet short.

Bars like Barfly are frustrating that way, especially for single guys trying to make the scene on crowded nights. How do you approach that beautiful stranger while Eminem's mewling about his mama? That's no soundtrack for a first impression. And, inevitably, the next song is something like Semisonic's "Closing Time." "Time for you to go back to the places you will be from." What the hell does that mean?

The bouncers all wear matching black, button-collar shirts with a Labatt patch sewn on one short sleeve and "Barfly" stitched onto the other. That should be your first clue that the place has no soul.

Barfly's new, but it's also ageless, like an Applebee's. It'll never deteriorate into a dive with squeaky stools and Tom Jones in the jukebox. But if that's what you're after, you have no business in Barfly, anyway. You should be out somewhere else, drinking with me.

Barfly on the wall Barfly