February 05, 2020
For people immersed in craft beer nerdom, it may seem like the trendy modern staples of sours, barrel-aged stouts and ales, and hoppy, hazy IPAs — so, so many IPAs — are leading the beer market. 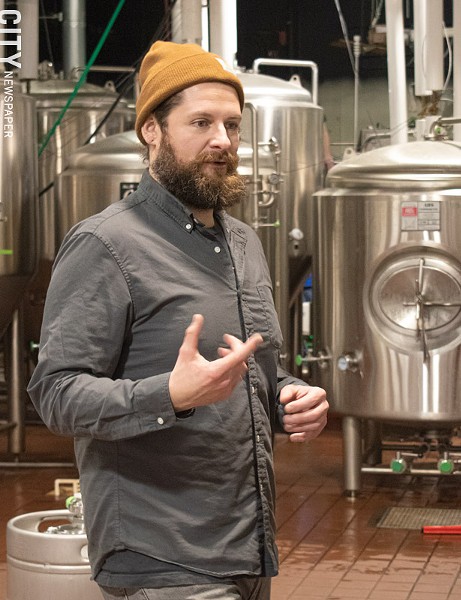 But they aren’t the market drivers. Lighter, lower-alcohol craft beers — particularly bitter, hoppy West Coast IPAs — are the best-selling beers on the market.

The Kind, a West Coast IPA and the flagship of Three Heads Brewing, has been its best-selling beer since the brewery’s start in 2011.

“I think there’s a lot of reasons for that. First off, it’s a good fucking beer,” Three Heads co-founder Geoff Dale said. “It’s hoppy, bitter, but not overly so. It’s balanced, you can drink it with food or on its own.”

Three Heads is neck-and-neck with Canandaigua’s Young Lion Brewing Company in terms of brewing capacity, making them the two largest breweries in the region behind Genesee. Both have 30-barrel brewhouses and 90 barrels for fermenting. Dale said 60 barrels of The Kind are fermenting at all times. One barrel equals 31 gallons, or 248 pints, of beer.

Young Lion owner Jennifer Newman sees the trend of lighter, sessionable styles and classic beer mainstays as driving sales for breweries. All Day IPA from Michigan’s Founders, a session pale ale with a 4.7 percent alcohol level, is among the bestselling locally, for example.

“You have to pay attention to trends, and we want to do some beers that follow them and hopefully people like them,” Newman said. “But we also hope that people are keeping a four pack of our IPA in their fridge.”

At Roc Brewing Company, owner Chris Spinelli’s best seller is Whoopass double IPA, a heftier beer at 8 percent, but still not on the cutting edge of hipness, being a clear, bitter West Coast-style IPA.

“At the end of the day, there’s still a lot of consumers out there that aren’t necessarily going after those trends,” Spinelli said. “IPA, as a category, let alone a high quality double IPA, are still sought after. People love Whoopass. They like that it’s a more traditional IPA.”

Even as Rohrbach offers new, inventive styles through its Neoteric Series, owner John Urlaub attributes the “lion’s share” of sales to its Scotch Ale, which was the first Rochester craft beer to attract a large following.

Sometimes there’s a disconnect between what’s popular with beer enthusiasts and the styles that do best in the general market.

As for breweries that function as in-house brewpubs with no distribution, there is a little more wiggle room to experiment without the pressure of having to scale up a beer for store shelves. But there’s a struggle there, too, in constantly keeping products fresh, new, and ahead of the curve, while still making good beer.

Jon Mervine at Fifth Frame Brewing Company is known for his hazy IPAs. He also has the only foudre, a traditional French oak vessel used for the fermentation of wild ales, in the city limits.

“Honestly, if you want to make it, you need to stay on the edge, know what people are drinking, know what you can produce,” Mervine said. “You need to know what you do well, and you can experiment, but it’s not a time to experiment on your reputation.”