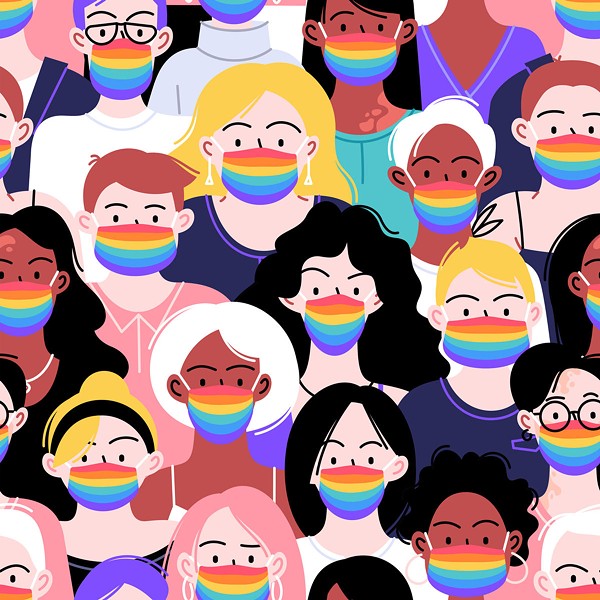 ILLUSTRATION BY OLGA W BOEVA / SHUTTERSTOCK
When the pandemic first hit Rochester, Penny Sterling wanted to know how she would be counted if she contracted the novel coronavirus.

Data of who has contracted COVID-19 was broken down by male or female. Sterling doesn’t fit that mold. She’s a transgender woman.

In recent months, New York  changed its policy and added a third option on paper coronavirus test forms: “Other.” On one of its recent daily breakdowns of people with the illness, which lists individuals by sex and and age range, the Monroe County Department of Public Health noted one case as "non-binary," meaning a person whose gender identity is neither masculine nor feminine.

“Quite frankly, it’s better than nothing, but only nothing is it better than,” Sterling said. “As someone who’s constantly being 'othered,' it’s kind of disheartening to see it as an official category.”

There are between 1 million and 2 million transgender people in the U.S., according to estimates from the Centers for Disease Control and Prevention and the Williams Institute, UCLA’s public policy think tank that focuses research on sexual orientation and gender identity matters.

Dr. Asa Radix, who goes by the pronoun “they,” is the senior director of research and education at the Callen-Lorde Community Health Center, which serves LGBTQ patients in New York City.

Radix said when it comes to public health, “other” doesn’t provide enough information for researchers either, especially for a marginalized demographic. They said that collecting data on sexual orientation and gender identity, along with the usual data about race, ethnicity, and age, can help pinpoint possible disparities.

"It’s awful when we see people dying or getting impacted by infectious diseases including COVID and nobody’s counting them,” Radix said.

The New York State Department of Health says it plans to add more options on electronic health forms, one about sex assigned at birth, another about current gender identity. However, there is no question about sexual orientation.

For five years, the Centers for Medicare and Medicaid Services and the Office of the National Coordinator for Health Information Technology have encouraged a standard for questions like this. The CDC has not, however.

Without hard data on a person’s sexual orientation and gender identity from state health departments and the federal government, health disparities can go under the radar according to Dr. Sean Cahill, director of health policy research at the Fenway Institute in Boston. He called this public health malpractice.

States like California and Pennsylvania already collect LGBTQ data for coronavirus testing. Without adopting standards, and by using the term “other,” New York  is still missing information, Cahill said.

“It’s just not really complete,” Cahill said. “You’re not getting all the data you need about the patient. So we’d really like to see them ask about gender identity, sex assigned at birth, also sexual orientation.”

He said the LGBTQ population as a whole is going undocumented in research on the coronavirus pandemic, and without hard data, health disparities can go under the radar. He also said that many who are gay, lesbian, bisexual, and queer are more likely to be exposed to the virus at work. That’s an estimated 14 million people in the U.S. according to a 2018 Gallup poll.

“We are almost twice as likely to hold front-line jobs to work in retail, food services, education, and health care,” Cahill said.

According to a 2015 survey by the National Center for Transgender Equality, trans people are more likely to earn less and be uninsured. Cahill said the same is largely true for the rest of the LGBTQ population.

The Human Rights Campaign found that at least 31 transgender or gender non-conforming people have been violently killed in 2020 so far. The majority were Black and Latina trans women. That’s higher than any other year since 2013.

Sterling said these issues are very real stressors that affect overall health. Research from the Fenway Institute and the National Center for Biotechnology Information supports her claim.

While she said she cannot speak for all trans people, Sterling believes a two-step question on gender identity would make a great difference. But it would need to be applied universally for matters beyond the coronavirus.

“If there were an actual tracker of trans people through the system for everything, then there’d be a clearer picture of what’s happening with us,” Sterling said. “But there isn’t. We’re just ‘other.’ ”

Noelle E.C. Evans is a reporter for WXXI News, a media partner of CITY.