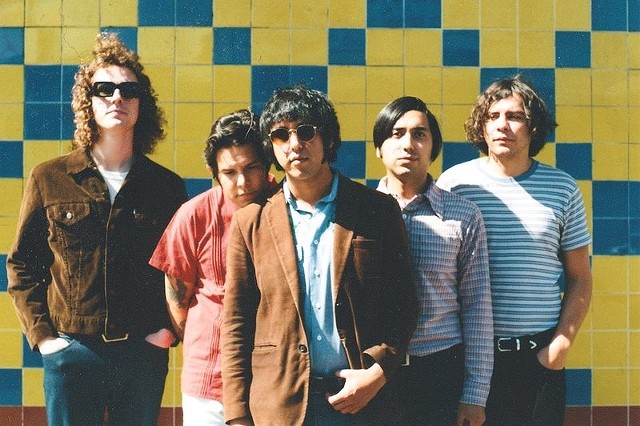 The Los Angeles-based psych-rock powerhouse Levitation Room is the first national band to play the venue since the Bug Jar’s reopening. On Tuesday, Sept. 14, the quintet will fill the room with fuzz-soaked sonic meditations that may just take your mind places it hasn’t been before. Fellow tourmates Evolfo and local psych rockers Drippers fill out the bill.

Beginning in the early-2010s, Levitation Room burst onto the LA psych scene with its shimmering 2015 EP, “Minds of Our Own.” Since then, the group has delivered two full-length albums, including their most recent, 2019’s “Headspace.” That LP is packed with the band’s brand of fuzzy guitar chords that pays homage to ’60s garage-psych nuggets while transporting listeners to a higher plane of thinking. Playing live music has been an important asset to Levitation Room’s ethos, and not touring for nearly a year-and-a-half has been troubling, particularly for singer and guitarist Julian Porte, who released a quarantine-inspired 7”with his band late last year.

“I really just miss the energy of a room,” Porte said via email. “I miss seeing people smiling and forgetting all the problems they left at home before the show. I miss that electric feeling that courses through my body and makes me feel like I’m floating on stage, only to be brought back down to realize I just experienced something greater than the self. It’s a moment you share with your band and the people in the audience. It’s real and it’s powerful.”


Levitation Room’s supporting act, Evolfo, is coming fresh off its second full-length album, “Site Out of Mind.” On its latest LP, the Brooklyn septet reach seems to reach beyond even the unexpected, with tripped-out cosmic soundscapes that cruise from thematic space rock to crate-digging spiritual funk. The craftsmanship inherent in the new album also shows the band’s maturity, especially compared to the scuzzy “rat rock” of their 2017 debut, “Last of the Acid Cowboys.” Right before the group began touring with Levitation Room, Evolfo held a record release party at TV Eye in Queens County to show off their experimental flair. Vocalist and guitarist Matt Gibbs couldn’t wait to bring these songs to the stage.

“I’m looking forward to the challenge of marrying the mellow vibes on the new record to the heavier tracks,” Gibbs said via email. “I am very psyched to play ‘Orion's Belt.’ That one is ready to rip a hole in the space time continuum.”


Drippers is the solo moniker of musician and visual artist Mike Turzanski, who’s typically joined by a rotating cast of musicians on his studio efforts. On Tuesday, the Drippers lineup will includeTurzanski, guitarist and keyboardist Sam Hirsh, bassist “Overhand” Sam Snyder, and drummer Billy Martin.

The best way to describe Turzanksi’s project is that it’s like “Going for a car ride at night with a mouth full of pop rocks,” he said. Turzanski released four new albums since the beginning
of the pandemic; the Sept. 18 show will be a kind of “greatest hits” of the new material with a possible new song as well.


“I'm just really excited to play again,” Turzanksi said. “It's been so fun to put these songs together. The lineup is a dream team of players. Hopefully the audience will review our case and judge us fairly under the sonic laws of New York state.”