The Baobab makes a community appeal 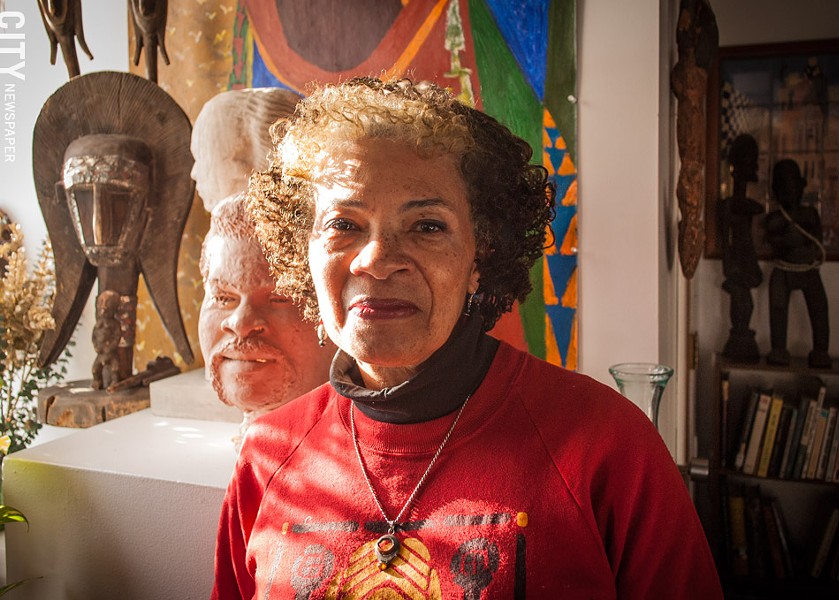 The Baobab Cultural Center, an arts and cultural hub focusing on African world history and diaspora, in early December announced that unless it raised $10,000 by the end of 2017, it would close its doors. A GoFundMe campaign, one of several fundraising avenues, in support is close to being fulfilled — it's currently at $8,300 — but efforts will be ongoing. Executive Director Terry Chaka says the initial drive was to get through the rest of 2017, but the center will need to keep raising operational funds going into 2018.

The organization in the past relied heavily on grants and volunteers, Chaka says. "But as we grew, it became evident that you really need to have staff and have more than grant money in order to operate." The Baobab is turning to the community for long-term support, she says, and will need to hire a grants writer and create paid full-time and part-time positions.

Chaka was originally The Baobab's gallery manager, but she's been operating the space alone for almost two years. Before that she had a volunteer administrative assistant who was also a grants writer and graphic designer.

"The two of us did a lot of things," including cleaning the space and rearranging furniture between events, Chaka says. "We were paid sometimes, when funds were available. We just basically did it for the love of it."

The center's work, Chaka says, is especially important now. "When you see the conversations that are happening," she says, "the stress that people are under, the direction the country is taking, the way that the world is going...you know that people need to understand one another better. And it's not about accusing one group or another — it's about actually learning the history, finding out how we got here. There's no instant solution to things. Sometimes people ask, 'Well, how do we fix this?' Well, first you have to know what you're really dealing with."

The education most people have had about African history has been incomplete, she says, and infusing the other side, the lost parts of history, is an important starting point.

The space, located on University Avenue in the Neighborhood of the Arts, was founded in 2005 by Dr. Moka Lantum and Dr. Cheryl Kodjo as a gallery to share their growing African art collection. It grew to become a hub for promoting a deeper understanding of African culture, from ancient traditions and early migration to its enduring influence and contributions to the world.

The Baobab doesn't currently have regular hours, but still functions as a resource center, and despite its fiscal troubles, currently offers regular film screenings, yoga classes with Jim Thompson, West African drumming taught by Fana Bangoura, and African World History classes with Michael Campbell. The center also hosts speakers, poetry readings, and author events, which in the past have included Thomas DeWolf, the decedent of the richest slave trader in the US; Joy DeGruy, author of "Post Traumatic Slave Syndrome"; and New Jersey Poet Laureate and activist Amiri Baraka. The space is also used by groups such as Showing Up for Racial Justice.

Lining many of the space's walls is a series of educational panels called "Magnificent Africa," an enlightening permanent exhibit that tells the arcane and often suppressed histories of ancient African civilizations, the diaspora, the Trans-Atlantic Slave Trade, political and social movements, and African and African American arts and music.

Chaka's presentation of the material takes about 90 minutes, but can easily fill up more time. In school, we learn depthy accounts of European history and exploits in the world, but the facts about Africa — its empires, philosophy, inventions, and other important contributions — are available, but are usually glossed over or omitted. This fact is both infuriating and depressing, but the material is also marvelous and inspiring; such is the importance of this center and what it offers to the community.

The exhibit was created in-house as a teaching tool for school groups that come through the space, but Chaka says that it's also used by social and racial justice groups that visit. Chaka plans to expand and update the exhibit as well as the series of short videos that accompany it. But first, fundraising continues.

Dr. Lantum is still involved with the space, but semi-remotely — he splits his time between Rochester and Kenya, where he has a health care technology company, Chaka says. There's also an advisory board which is currently going through some transitions.

Aside from creating paid positions, Chaka's goals for the center moving forward are to expand programs of cultural enrichment for youth, including an after school program; to expand partnerships with local social justice groups; and host more regular art shows, drawn from a list of artists she'd like to exhibit. She's also considering hosting art collecting workshops, programs to promote literacy skills, and seminars on culinary injustice.

You can contribute to The Baobab at gofundme.com/support-the-baobab.