Let nothing go to waste 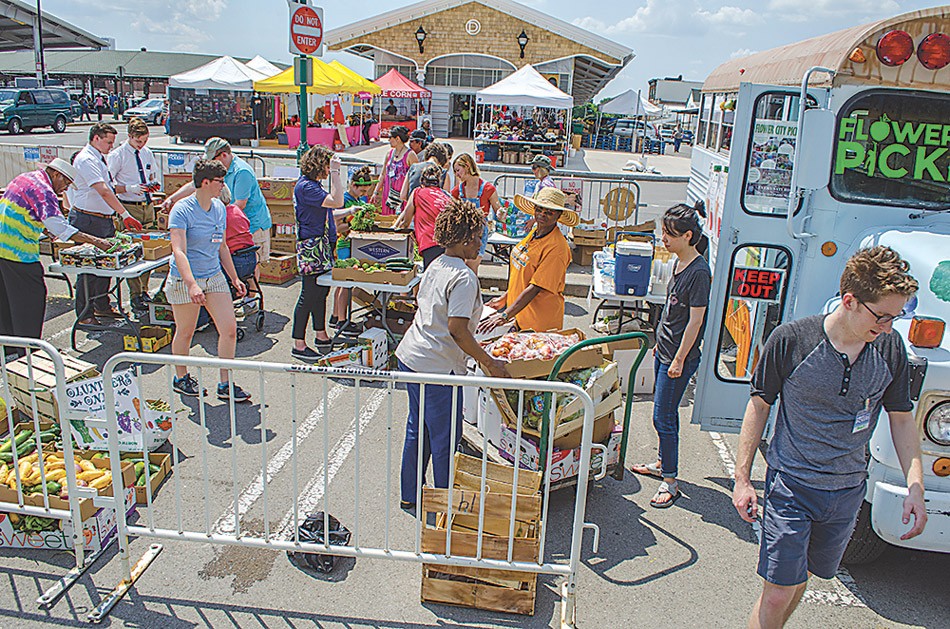 On an average Saturday, Flower City Pickers will collect between one and two tons of unwanted produce and food products from vendors around the Rochester Public Market. About 60 percent of that, says FCP founder Khoury Humphrey, is still good for human consumption — the rest of it can feed livestock or be composted — so the group sorts and redistributes the collected food to local shelters and hunger relief organizations. Since it started in January 2015, FCP has saved 600,000 pounds of food from being dumped into landfills.

You might have seen the FCP bus parked in a corner of the Market, with volunteers hauling produce, sorting, and boxing up goods to go out to groups around Rochester. There's a grading system: Food that receives an A (for "astonishing," the group says) still has a relatively longer shelf life; a B (for "blemished") graded item goes to organizations that will use it immediately, like Food Not Bombs, which serves healthy meals at St. Joseph's House of Hospitality on Saturdays; and the C-grade (for "critter and compost") products can help feed livestock or head to the compost pile.In general, American culture's relationship to food is through a complicated, tangled, disconnected industry — it's driven by convenience and the ability to get every kind of item at any time from any supermarket. "We very much rely on stores and Amazon.com and whatever to get produce and get everything that we need," Humphrey says. "We're not actually relying on our communities to provide what we need anymore." 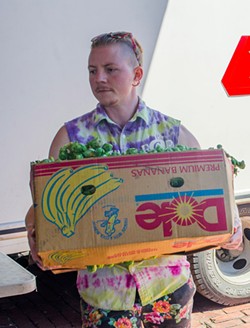 Grassroots groups like FCP give Rochesterians a chance to get back to a personal understanding of where our food comes from and where it goes, while helping out those in need. You can learn more about Flower City Pickers, including about how to volunteer, at flowercitypickers.com.

CITY spoke with Humphrey and FCP Acting Director Evan Zachary to learn more about what drives food waste at the Market, what the solution might be, and their thoughts about food activism in Rochester. An edited transcript of the conversation is below.

CITY: What do y'all see as the biggest drivers of food waste at the Market?

Khoury Humphrey: Most of it is the wholesalers. I like to tell people if your food doesn't have dirt on it, don't buy it. You want your food to be dirty because that means that it's local, it means it came from a farm. You want it to look a little wonky because somebody grew that.

So a lot of the waste, at least food waste, from the Market comes from these people who have hardly any control over what they buy. Unfortunately it's a vicious cycle, because it all comes down to numbers. All of the credibility and liability falls onto the individual vendors, and so what happens is a lot of this produce, instead of them selling it for the dollar deal, it's just easier for them to buy another truck for a couple of thousand and just throw away old produce than it is to try to relocate it — or re-store it with limited storage space available.

Also the produce that is coming off these trucks is highly packaged. So these things are coming in boxes, and inside those boxes, there's different packaging that absorbs wetness. There's these different chemicals, and stuff that's kind of like baby diapers. I don't know if you've ever seen a wet baby diaper run over in the road, so that's kind of what it looks like at the market in some places. And so not only is there food waste, but there's also the problem of the packaging and recycling.

CITY: I might be jumping ahead a little bit, but it sounds like a lot of solutions would need to take place on the front end, like how things are packaged, or how produce comes to the market to begin with.

Humphrey: Exactly. We're not a local culture and local society anymore. We want everything that we see in a travel magazine — instead of going and taking a vacation to a beach and having a pineapple, we can go to Wal-Mart and just buy a pineapple and watch "Gilligan's Island" on TV and kind of simulate the same thing.

Evan Zachary: Quickly just to add a couple things, to take us back to what is causing food waste at the market: I think it's useful to segment what you mean when you say food waste, because there's a couple of different stages of that process. When it doesn't sell at the market and the vendors are no longer interested, there's a certain extent of food waste associated with that. However, that it's not viable for a retail setting doesn't necessarily make it food waste yet.

One of the reasons that so much of the food is going bad, that I've been made aware of by talking to some of the folks who physically transport stuff around the market, is the types of storage that's available to the wholesalers within the market itself. A deficit of temperature-controlled storage is something that they struggled with, for example. So in the winter months, it's challenging for them to prevent certain sections of their food inventory and storage from freezing. So that is one piece of it.

To us, wasting food — the way Flower City Pickers looks at that — is sending it to a composter. Our top priority, and the way the Environmental Protection Agency prioritizes what you do with food waste, sets feeding people at the front of the line, basically at the top of the chain.

The barriers to increased food recovery include transportation that's available to us. There was a study done in Seattle over like four or six years that looked at food retailers and what their barriers to donation were. It specifically categorized what the limitations were; 46 percent of those vendors and retailers cited transportation constraints, distance, costs to the fleet as their biggest barrier. 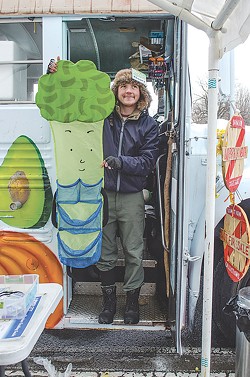 One other interesting thing is in that array of barriers, one thing that is decreasing — in terms of preventing retailers from donating — are liability concerns. Because as re-use increases as a common practice more people are interfacing and understanding the Good Samaritan Act, which is what sort of protects us. So the physical barriers, at this point, have kind of become a logistical puzzle as opposed to a legislative puzzle.

CITY: A lot of these issues are really tightly interconnected. How do you think these things can start to unravel and move forward?

Zachary: The food waste issue — and the unjust access to food — is a problem that runs up and down the supply chain in terms of how products are bid for and what food you are even able to be exposed to over the course of your development, based on where you live, what schools you go to, and things like that.

But like with any issue relating to sustainability action at home, there's a component of that. We recognize that to a certain extent we aren't — well, not to a certain extent, in a whole extent — we're not solving hunger. We're sort of treating one of the symptoms of it in a way that is low impact. To get more at the root of why food insecurity is happening, you need to look at nutritional education and access to that information and access to exposure to those kinds of foods. But there's also the pretty significant conditions in which someone might be exposed to those which are a little bit larger scale. It's individual, it's educational, but it's also kind of systemic and economic.

CITY: I wanted to pivot to a bigger view about food activism in Rochester. I wanted to get your general thoughts about how you see the scene here.

Humphrey: There is a scene for it, I feel. There's actually a group that we work very closely with called Food Not Bombs. They come and pick up from us at the market and they use some of the food that wouldn't normally have that long of a shelf life, and they use it the same day to cook and serve it. And they also get groceries out to people.

Zachary: Taproot is a newer partner of ours, but we like to think of them as our neighbor. So the Taproot Collective does urban agriculture education workshops and consulting. Basically they're attacking food deserts from the ground up by creating productive food spaces in settings where you wouldn't normally find them. I know that they did just purchase a quarter acre at the corner of First and Pennsylvania — which is just a stone's throw from where we are set up — that they're now actively converting into this cool urban farm, and they have a grant to fund the construction of the greenhouse there. So you're going to see a neat new addition to the Marketview Heights neighborhood when it comes to food security.

We're going to be working closely with them, taking some of the things that they grow there and distributing that to our network, as well as sending them our compost. We love that example because it's sort of this instance of a really localized food processing system that is acceptable and pretty just.

CITY: It sounds like there's a lot of red tape tied up into our food system, and it's not about ease of use. It's not about actual practicality.

Humphrey: Unfortunately. There's the bigger picture and the biggest solutions are education and nutrition programs, and community involvement, and being advocates for ourselves. 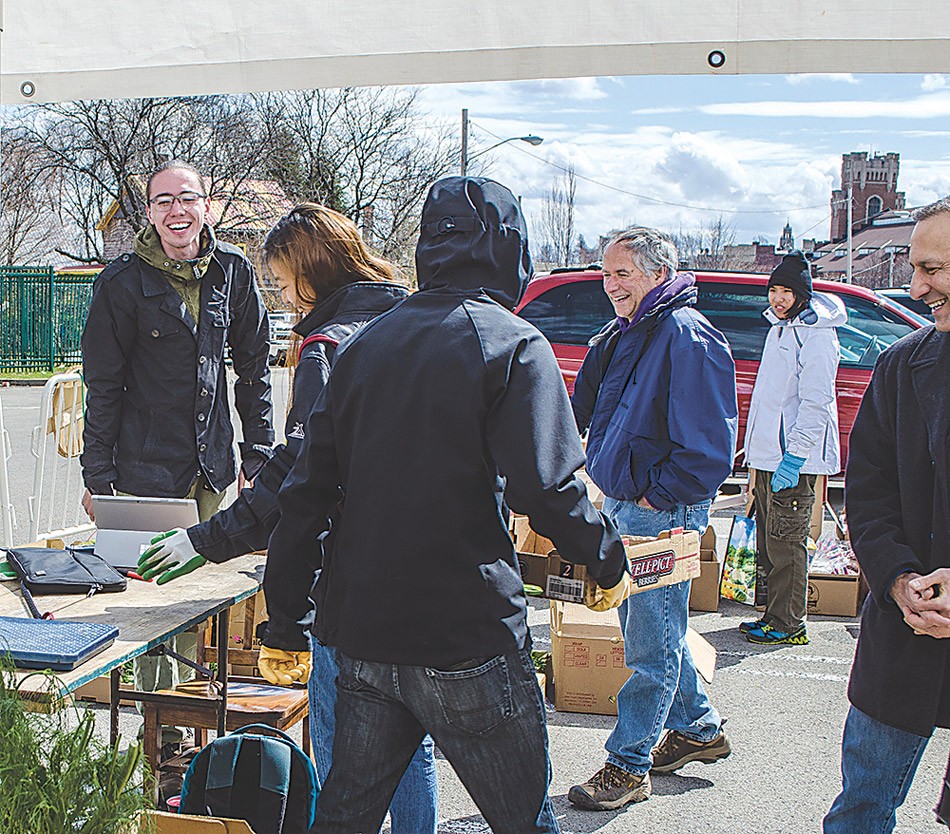 EDITOR'S NOTE: This article has been updated to correct the amount of food FCP has saved from the landfill.