Less than scientific proof of life 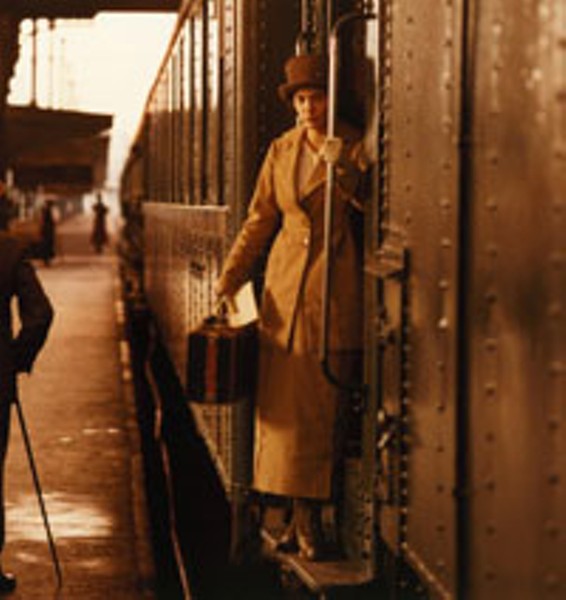 Warner Independent Pictures A face made for the screen: Audrey Tautou in A Very Long Engagement.

There's a scene in the early '90s Cameron Crowe film Singles where Bridget Fonda's character Janet goes to toss a paper towel into the trash and bases whether she should call this guy she likes on whether she sinks the shot. It always stuck with me because I have often sought answers using the "If this happens, then this will happen" theorem.

Mathilde (Audrey Tautou) relies on that same less-than-scientific method to keep from giving up as she searches for her soldier in A Very Long Engagement, Jean-Pierre Jeunet's adaptation of French novelist Sebastian Japrisot's gorgeous ode to the absurdity of war and the intensity of love... as well as the intensity of war and the absurdity of love.

Mathilde's longtime sweetheart Manech (Gaspard Ulleil from Brotherhood of the Wolf, a total guilty pleasure) was court-martialed in 1917 along with four other men for self-mutilation --- they had hoped to earn a ticket home from World War I. All were thought to have died after being sent out into No Man's Land in lieu of execution, but as the voiceover narration says, "If Manech were dead, Mathilde would know."

Three years later Mathilde decides to launch her own investigation into what happened at the oddly named Bingo Crepuscule trench. Despite a childhood bout with polio that left her with a limp, her combination of luck and passion takes her from her home on the breathtaking coast of Brittany to the military archives in Paris to the battlefield where Manech was last seen. The answers don't come quickly or easily, and Mathilde is not above playing the wheelchair card when it suits her purpose.

In true Jeunet fashion, Mathilde's journey finds her crossing paths with a colorful array of characters, including a determined private eye (Ticky Holgado, from the talking photo in Amelie, in his final film), a bartender with a multi-purpose wooden hand, a stubborn mailman, and a mysterious but helpful German woman (Elina Lowensohn, best known for her role as the titular vampire in Michael Almereyda's Nadja).

One step ahead of Mathilde, however, is Tina Lombardi (Marion Cotillard, from the Amelie ripoff Love Me If You Dare), a prostitute who was also involved with one of the court-martialed soldiers. But Tina's resolution comes in the form of cleverly implemented revenge that inadvertently thwarts Mathilde's dogged efforts to find Manech.

It's whimsical, it's romantic, and it's gory as hell. Jeunet and cinematographer Bruno Delbonnel don't shy away from the horrors of war as they juxtapose the bleak grays of the trenches against the crimson innards that saturate the battlefield. The lovely warm tones used away from the war help them re-create 1920 Paris --- with scenes showcasing the Opera Garnier, the Eiffel Tower, and the Musee d'Orsay when it was still a train station --- presumably using a blend of actual footage and computer-generated imagery (I say "presumably" because I didn't research it --- I adore buying into the illusions on the screen). And is there anything sexier than Edwardian-era underthings?

Audrey Tautou, who also teamed up with Jeunet for Amelie, has a visage suited for silent films. She beams during the flashback scenes showing the adorable courtship of Mathilde and Manech, but her features are perpetually flecked with worry during her quest to find him. The cast is full of familiar French faces, including Jeunet regular Dominique Pinon as Mathilde's kindly uncle who gets embroiled in her mission and Jean-Pierre Darroussin (Red Lights) as one of Manech's fellow court-martialed soldiers.

And in a very welcome return to the screen, Jodie Foster gives a heartbreaking performance as a woman in love with two best friends. Apparently a Yale education can do wonders for your language skills.

Last week I scrambled aboard the "Best Movies of 2004" bandwagon. But have other critics highlighted for you some of the more exciting celluloid prospects of the coming year? Nope. That's because they don't love you like I love you. These are five films to watch for in 2005, along with their tentative release dates:

Elizabethtown: Written and directed by Cameron Crowe, it stars Orlando Bloom as a man who revisits his small-town upbringing after the death of his father. (7/29)

The New World: The proverbial bad news-good news: Colin Farrell starring (no!) as Captain John Smith (okay... ) for writer-director Terrence Malick (yay!) in this epic about the settlement of the Virginia colony. (11/9)