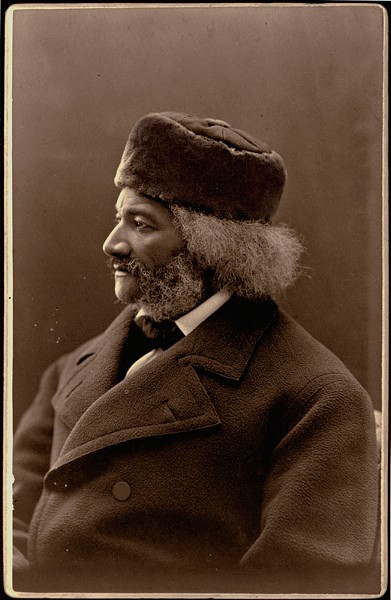 With around 160 separate images, Frederick Douglass was the most photographed American of the 19th century. The great abolitionist saw the medium as an incredibly useful tool: Photography was a way to ensure true depictions of African-Americans; it was a way to directly combat racist caricatures and showcase the dignity and humanity of people of color. Douglass wanted to confront the viewer through the image — many of his portraits feature him solemnly looking directly at the camera and at the viewer — and shape cultural conversation with the "moral and social influence of pictures." Photography, he believed, should play an important role in ending slavery and fighting for equality. For a fascinating encapsulation of Douglass's thoughts on the art form, look to his speech "Pictures and Progress."

Artist Amanda Chestnut and George Eastman Museum Associate Curator in the Department of Photography Heather Shannon will dive into Douglass's use of photography, as well as the importance of collecting and preserving works by people of color, in the lecture "Focus 45: Frederick Douglass and His Photographic Legacy." The lecture takes place Saturday, February 10, at the Eastman Museum's Dryden Theatre, 900 East Avenue. 12 p.m. Free. 327-4800; eastman.org.

Also, on Wednesday, February 14, the Frederick Douglass Bicentennial Commemoration Committee will host "Shine a Light on Douglass" at the Highland Park Bowl (1137 South Avenue). Attendees can assist RIT's Big Shot photographers by shining a flashlight on the Douglass monument as they take a new image of the 119-year-old statue. Afterward, the photo will then be on display at Rochester Contemporary Art Center through March 18. Wednesday's event begins at 6:30 p.m. and is free. cityofrochester.gov/frederickdouglass200.