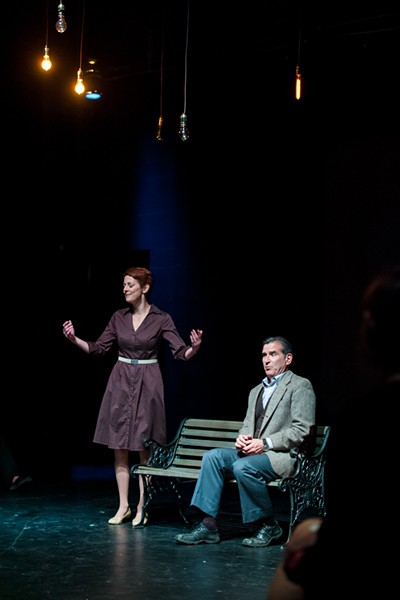 There were almost too many performance choices on opening night of the Fringe (a good sign, of course, for the festival's fifth year). After attending the opening night party where we toasted to the success of 500 shows taking place over the next 10 days, I headed to School of the Arts on Prince Street. SOTA was a hubbub of activity, running three shows at once in its many theaters. The black box theater -- my destination -- featured WallByrd Theatre Co.'s production of "The Kiss."

While it wasn't sold out, a healthy-sized audience filled the seating on three sides of the stage. Each seat in SOTA's black box offers an up-close-and-personal view of the minimalist set design, one of the highlights of this particular show. From three square wooden "chandeliers" hang 12 light bulbs -- most of them warm Edison bulbs -- which function almost as secondary characters in the show. The use of the bulbs range from musical to ambient, a truly masterful design on the part of director Virginia Monte.

Scottish playwright Murray Watts penned the show, which centers on a chance meeting at a park bench. Local actors Greg Ludek and Nancy Fancher make up the two-person cast, and they came across a little clunky at first (the latecomer audience members and an incident involving a photographer [which later turned out to be with City] in the corner certainly didn't help), but relaxed into a natural chemistry after a few minutes. In an effort to preserve the surprise twists and "choose your own conclusion" nature of the show, I won't delve into the plot -- suffice it to say that this is a show that you'll want to focus on for the full 60 minutes it lasts.

"The Kiss" will be performed again on Saturday, September 24, at RAPA @ SOTA: Black Box Theatre. 9 p.m. $12. Appropriate for all ages.