September 19, 2018
When Megan Loomis walks out on stage for her one-woman show, “The Girl in the Band,” she doesn’t appear to be, well, a girl. Dressed in coveralls and a flat brim cap and affecting a “boy voice,” Loomis begins the show by quoting many of the misogynistic things her bandmates have said to her over the years.

But when did it all start? That’s the question she investigates over the next hour or so, with the aid of seven instruments (eight, if you count her impressive vocal pipes) strewn around the stage and the power of memoir.

Loomis — who calls herself Peggy in the show, as “names have been changed to protect the innocent… and the guilty” — leads the audience through a tale about a girl who grows up playing in the school band and eventually becomes a girl who tours with everything from emo hipster bands to 90's Irish American bands; primarily surrounded by men who constantly try to dampen or underestimate her talents.

It’s unclear whether the show is autobiographical or not. Loomis grew up in and around Rochester, graduating from both School of the Arts and the Eastman School of Music, and she has returned many times on national and regional gigs (her most recent was at Geva Theatre Center in “The Other Josh Cohen”). It’s entirely possible she simply tweaked her own life story for the production.

Either way, it is a compelling show with enjoyable music (particularly "The Monster" and "The Critic" tunes), and Loomis is about as charming and expressionistic as an actor can be, which keeps the audience engaged and earned her a standing ovation on Tuesday.

And yes, she plays a mean fiddle — and a mean accordion, for that matter. It’s just a shame “The Girl in the Band” won’t run more than one night.

Tuesday night was the only performance of “The Girl in the Band” for Rochester Fringe 2018.  The show will continue to tour, more info at gurlintheband.com. 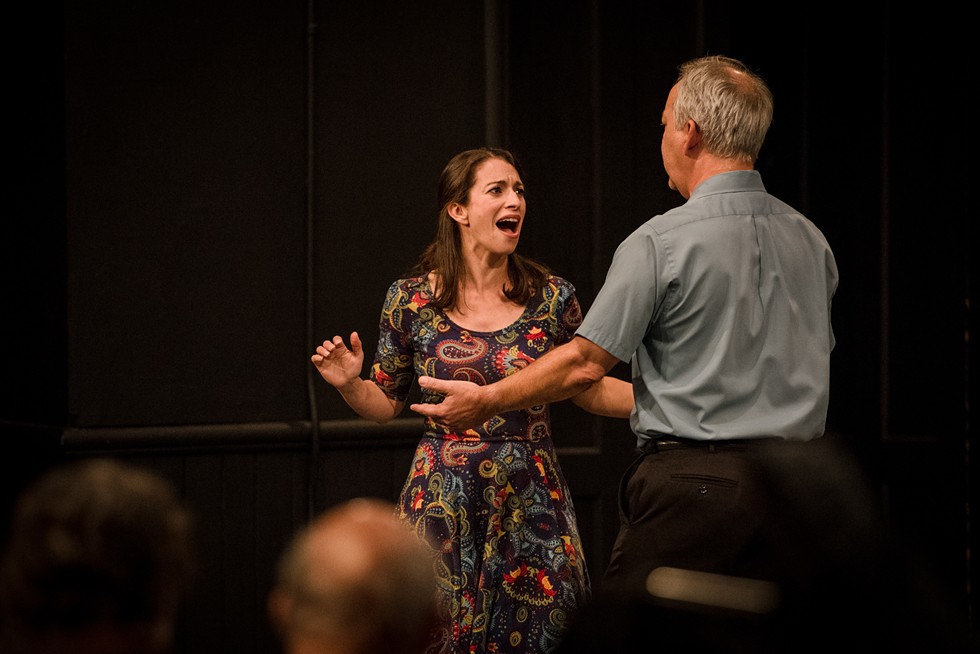 It’s always encouraging to see a theater packed on a Tuesday night at 8:30 p.m.

Of course it’s also Fringe season, but last night’s MuCCC crowd is a bigger testament to not only a loyal following for their productions, but also for the cast and crew of “Home is a Four-Letter Word,” a production by the company Words, Words, Words; written by local singer-storyteller Doug Waterman and directed by Judy Molner.

Three short scenes draw on heavy, relatable themes of love, lust, adultery, family vacations, parental relationships, abortion, and career ambition. At the heart of each scene is an original song, along with a way to tie the themes back to an overall concept of home and what it means.

Though the show isn’t quite 60 minutes as advertised, the length feels appropriate for the amount of content provided to digest during the show. (Tuesday’s audience members were especially choked up after the third scene, which ends the play.)