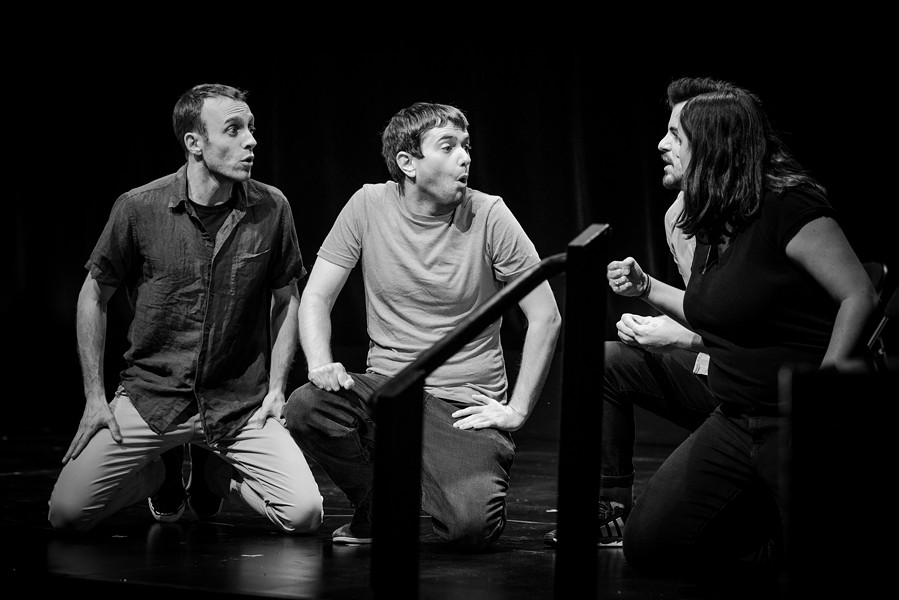 All it takes is a single word for one of New York City’s longest-running musical improv groups, “Good Catch,” to create an (almost) full-length musical theater production, complete with piano instrumentation, lyrics, and (fairly terrible but hilarious) choreography.

On Friday, that word was “milk.”

For the next 50 minutes, the four-person ensemble (along with pianist James Harvey, who has his own Fringe show at Eastman called “The Bald-Faced Truth“) created an emotionally-charged plot line that covered everything from teenage love and organic farming to gay marriage and tummy rubs (OK, maybe you had to be there for that one). Throughout the production, the tightly knit group fully embodied the idea of an improv “hive mind,” moving seamlessly between scenes and songs that left the audience in almost constant stitches.

There weren't any show programs, so it’s hard to identify the four members on stage for this performance: on “Good Catch”’s Facebook page, they are listed as Rebecca Bayard, Chloe Jury-Fogel, April Lavalle, Luke Martin, Marty Scanlon, Kirk Stevens, and Mike Wirsch. Stevens is from Fairport (class of 2006!) and was proud to be returning to Fringe again.

Simply put, two performances from this crew is hardly sufficient — hopefully they will return to Fringe in 2019.


Why brainstorm your own show when there’s more than 500 different shows taking place at Rochester Fringe? At least, that’s the logic behind Unleashed Improv’s popular returning Fringe production, “Other People’s Shows.” In 80 minutes, the seven-person ensemble performs their own interpretations of other shows in the Fringe guide — there’s one conveniently placed on every audience member’s seat — relying on attendees for suggestions from every genre (theater, dance, spoken word, music, multidisciplinary, children’s).

Helmed by Fringe faves Abby DeVuyst and Kerry Young (who also wrote the annual ongoing sell-out “Dashboard Dramas”) and featuring Dan Hart, Patricia Lewis Browne, Ken Klamm, and Jeff Suida (there was another new member who isn’t listed on the website yet as well), the show relies on both the wit of the players and the readiness of the audience. Several willing volunteers went on stage throughout the night, which made for some of the most entertaining content.

This year, “Other People’s Shows” is performed in the elaborate Spiegeltent, which also features a full bar and VIP booths with seating for six at $125. The late night shows precede the always-sold out Silent Disco, and the ensemble has to keep to a tight schedule because of this fact.

No spoilers for the “happy ending” here, but it’s safe to say what happens at Fringe stays at Fringe. Also, maybe don’t bring your parents. Or your kids.