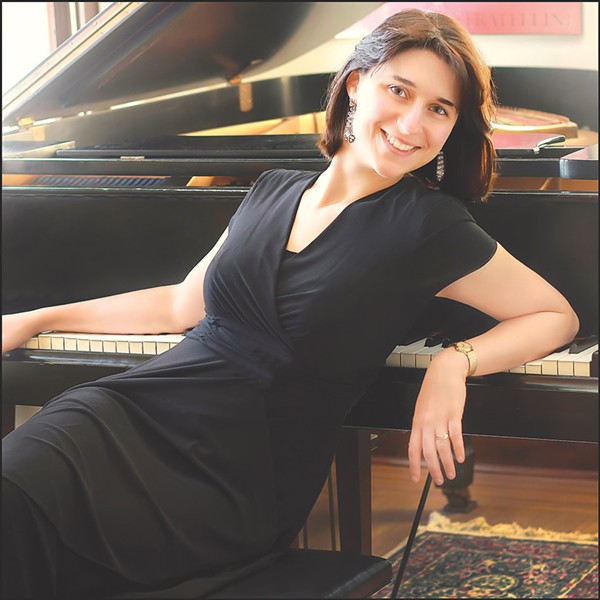 Laura Dubin began taking piano lessons from her mom, a classical pianist, while she was growing up in Brighton. But there was another pianist in the family, her uncle, David, who visited from California.

"He played a little jazz and showed me how to improvise," says Dubin, who was 7 at the time. "He played patterns on the black keys. Using those keys, I could just make something up."

She found a Charlie Parker album in her parents' collection and played it over and over. Her uncle taught her John Coltrane's take on "My Favorite Things," Miles Davis's "So What," and Dave Brubeck's "Take Five."

Her mother found a jazz piano teacher, Richard Delaney, at the Hochstein School of Music and at the first lesson, he told Dubin to check out Oscar Peterson's "West Side Story." She already knew the tunes; now she heard them swing.

"That album lit a fire," Dubin says. "Oscar's playing, the swaying of the trio..."

When Dubin was 16, a family friend arranged a lesson with a major jazz pianist, Fred Hersch. But she got more than a lesson; Hersch urged her to come to Western Michigan University, where he was artist in residence.

"It turned out to be the perfect fit," Dubin says. "I had a phenomenal piano teacher, Stephen Zegree, and occasionally, Fred Hersch." She played duets with Hersch at a concert.

Dubin also had opportunities to collaborate with vocalists Janis Siegel, Mark Murphy, and Kurt Elling. And she played at the Detroit International Jazz Festival as a member of the WMU Jazz Orchestra with saxophonist Bobby Watson.

Dubin was one of eight pianists chosen to participate in the Mary Lou Williams Women in Jazz Festival's Emerging Artist Workshop at the Kennedy Center in Washington, D.C.

Her first major gig after graduating was a15-month job in a jazz trio on Holland America Line cruise ships, where she met and performed with her future husband, drummer Antonio H. Guerrero.

When the cruises were over, Dubin and Guerrero moved to Mexico and gigged in and around Mexico City for the next 18 months before settling in Rochester.

Dubin has written over 40 pieces since 2008. Some of her compositions honor great pianists like Brubeck, Horace Silver, Bill Evans, and Wynton Kelly. Other tunes try to capture places she loves, such as "Barcelona," or comment on aspects of life, like "Something's Cooking," "Thunder," and "Anxiety."

"He's always been my favorite classical composer," Dubin says. "My mom played Debussy and I played a lot of it growing up. He had a lot of jazz-influenced chords and elements in his music. Some of my compositions have been inspired by some of the harmonies that show up in his compositions."

She'll play a Debussy piece at the XRIJF, combined with a jazz standard in the same style.

"My goal was to arrange those songbook tunes with the same elements I use when I'm composing," she says. "I try to keep them fresh. I add my own twists. Some of them have different tempos or time signatures. At the same time, I don't want them to be so far out that they sound like a completely different song."

At the Xerox Auditorium, Dubin will play two completely different shows with Guerrero on drums and Kieran Hanlon on bass. Along with originals and standards, she'll perform some classical-jazz fusion involving Beethoven, Mozart, Chopin, Ravel and Debussy.