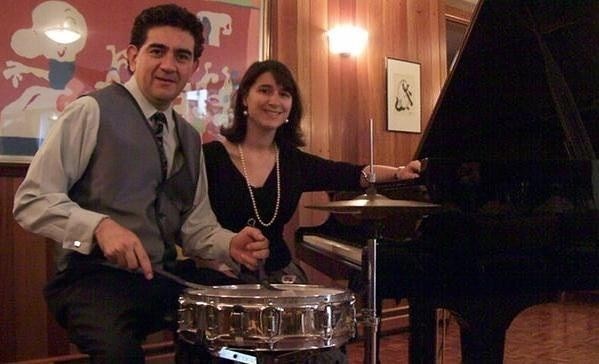 [ UPDATED AND REVISED 6/20/19 ] Two young people from different backgrounds meet and fall in love — and society tears them apart. You may recognize that as “West Side Story.”

Here’s another story: Two young people from different backgrounds meet and fall in love — and end up making music together all over the world.

Pianist Laura Dubin grew up playing classical music and jazz in Rochester. Antonio Guerrero played percussion in bands around Mexico. Then they both took jobs playing in jazz groups on a cruise ship in the Mediterranean in 2011.

"The story starts there," Guerrero recalls. "Just having the opportunity to share the music on the ship … and then we decided to go a little farther than that in our relationship. Since then, we are sharing love and musical life."

Dubin echoes his recollection. "We were playing literally every night on the ship together, so that’s a good way to get to know a person and a musician, playing together all the time," she says.

Beyond meeting each other, the experience shaped Dubin and Guerrero in other ways, both personally and musically. Dubin says it was "special to meet people from another culture that you can connect with, sometimes even if you don’t speak the same language very well. You can connect through music."

"There are so many different ways to even play jazz," Guerrero says, "because in these days, jazz is all around the world. And when you play with someone from a different country, even the same tune ... from the American Songbook, sounds completely different."

These two have developed a unique sound over the years together. And they often combine classical music with jazz in new ways. At home, Guerrero would hear Dubin practicing classical pieces on the piano, and he encouraged her to find a way to bridge these worlds.

Guerrero says he finds it to be a challenge to fit new drum parts into these existing pieces, while trying to be respectful of the music.

"Everything is just perfect," he says, "But what I’m trying to do is just respond to the dynamics, and think a little bit if I was in the orchestra, and emulate all the sounds with my drum set. But keeping in mind, this music is already perfect."

Dubin, on the other hand, says these parts all seem very natural to her.

"What’s funny to me now (is that) I can’t imagine these pieces without drums," she says. "We play these together so often. If I hear the actual, the original version — something’s missing now, because I’m used to it, and I love what he’s done with it so much. He’s added so much to it in our own way of playing and performing these pieces."

Their latest project is playing “West Side Story," and Leonard Bernstein’s music has given them a chance to find new ways to reinvent familiar melodies. They play with the harmony and rhythm, as well as finding ways to capture the full orchestral score into something that works for piano, drums, and bass.

Dubin says their partnership continues to inspire her to write new music, as well as in their performances.

"Having the rhythmic support, and dialogue there, has inspired a lot of my arrangements and compositions," she says. "And I think we have grown together a lot, with different musical ideas....It was a challenge at first, and now it’s something that is a natural part of musical being together."

This article is cross-posted on wxxinews.org.

An earlier version if this article incorrectly listed Tom Lange as the double bassist playing in the Laura Dubin Trio at the Friday, June 21 performance at The Wilder Room.  The double bassist performing in the trio's jazz fest concert is Danny Ziemann.

Mona Seghatoleslami﻿ is the host and producer on WXXI Classical 91.5 FM weekdays from 3 p.m. to 7 p.m. She also hosts the lunchtime concert series Live From Hochstein Wednesdays at 12:10 p.m., interviews musicians, produces special programs, and works on any project she can find that helps connect people and music in our community through WXXI.