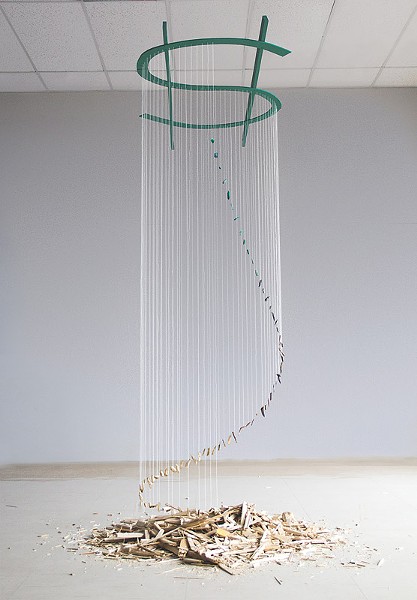 People react to adversity in a variety of ways. When a competitor tried to sabotage the work of Rochester-based artist Jihwan Park, he incorporated the experience into a new thesis about the necessity of brokenness. Uncommitted to one medium, Park's focus is conceptual, about process, and the exploration is executed through a variety of media. His current show, "Latency," at Rochester Brainery's Mind/Matter gallery explores slippery definitions and the destructive quality of creating.

Prior to moving to the U.S. more than two years ago, Park worked as a designer in South Korea. Among many other achievements, he's responsible for the design of the "Ripley's Believe It or Not" museum on Jeju Island, South Korea.

In preparation for the design proposal, Park traveled to Ripley's museums all over the world, and found each to be boring and plain. He wanted to create a building and its galleries that would be as curious and engaging as the exhibits themselves.

He describes his design, "Adventure Factory" — viewable at "Latency" in intaglio print form — as a kind of experiment in defying his client's expectations. The proposed site for the museum was in an upscale area where many buildings had Romanesque elements. "I wanted to break that ordinary rule and make a factory-type building in such a gorgeous area," he says.

The quirky building's facade includes mechanical, cottage, and anthropomorphized elements that together make it reminiscent of the roving domicile in the Miyazaki film, "Howl's Moving Castle." Park also designed the museum's 12 small galleries, each with a themed parody of pop culture, including "Night at the Museum," and "Ripley's Angels."

But Park found that competitors within the design firm he worked for were trying to thwart him; someone even poured paint on his design. Though his design became actualized, the experience led him to "break" his own artwork later on.

In his "Broken Art" series, created while earning an MFA at RIT, Park explores destruction through the creation — and then deconstruction — of the familiar; the pieces of which are then used to form allusions to both other familiar imagery and to the destruction itself.

"Images from recent art history and the process of deconstruction are utilized to demonstrate how artists must destroy the dominant narrative of their day in order to create something original," he says.

In each work, Park riffs on Abstract Expressionism and Pop Art in appropriated images and styles. Most pieces feature painted canvas shredded and hanging limply from the broken and splintered stretcher bars, the structure of which is rearranged to form words.

"Torn" features a destroyed canvas, filled with paint splattered a la Jack-the-Dripper, the supporting wood beams now spelling out the title. In "Tear," the title refers to the word spelled in wood, to shredded fragments of a weeping Lichtenstein-esque woman, and to the droplets falling from her eyes.

Robert Indiana's iconic "Love" square is similarly spelled out but remixed in two impassioned works: "Hot Love," with its painted kiss marks and scorched wood, and "Broken Love," with its splintered beams. In the gallery's other room, post-sculpture studies of the "Love" works are explored in intaglio prints, which Park sees as more playful than the emotional sculptures.

"Hype" is particularly explosive, spelled out in the box of stretcher bars, painted red, and with shards of wood pinned to the wall all around the piece. A sort of companion work, "Hyperbole," is installed in the other room, and consists of a pile of splintered wood resting on the floor, with shards gradually rising up to meet a green wooden dollar sign anchored to the ceiling. Mobile-like, the shards form a hyperbolic curve, suspended by strings.

He says the work is meant to represent the regenerative power of an artist and the flow of art movements while it draws connections between money and masterpieces, alluding to the contemporary art world's use of hype to make or break an artist. 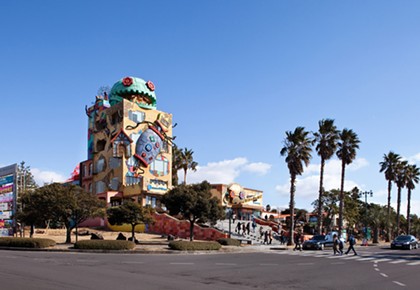 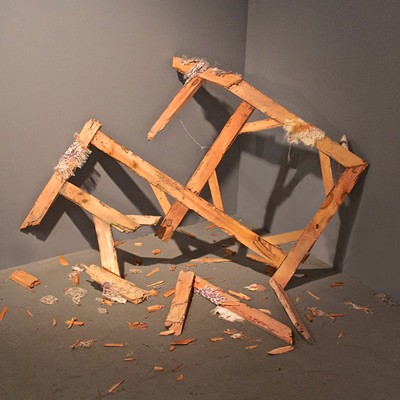 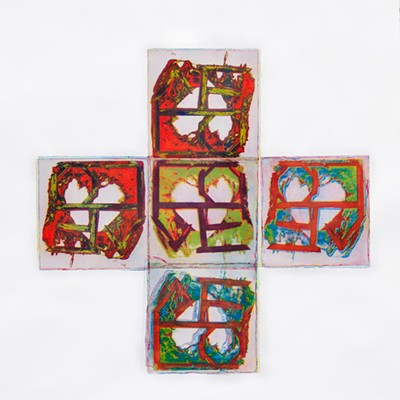 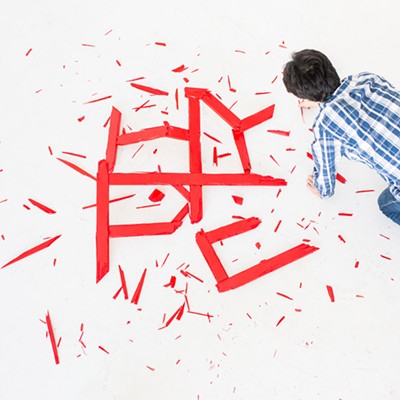 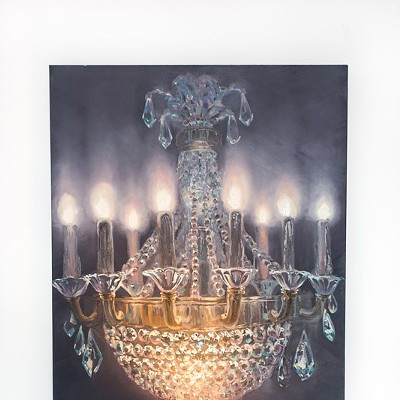 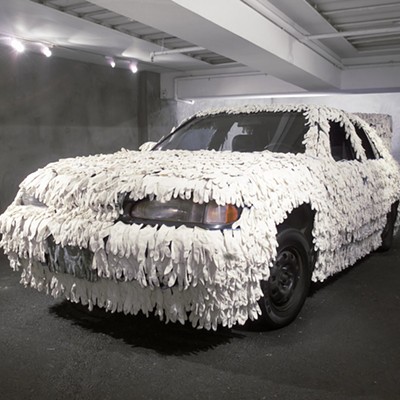 Hype is a fact of art life that Park is very familiar with, having spent years funneling his creativity into flashy, expensive installations for corporate clients. In 2010, Park designed the exhibition and pavilion plans for the Korean Business Pavilion at the Shanghai Expo in China. He says his original proposal was quite different from the accepted installation: a media tower with 192 monitors synchronized to show one movie.

"It was almost impossible to approach them with abstract thinking," Park says of his clients, which included Samsung, LG, and various energy companies. The experience, with its heavy focus on new technology, led to the creation of Park's "Li(gh)t" series, which involves "aesthetic value rather than glittering lure," he says.

The two "Li(gh)t" installations contain a clever flip on visual phenomena. Each of two canvases are painted with a chandelier, which remains dim until the viewer switches on a lightbulb and illuminates the painted crystals and candles. Each work renders a unique tension between actual and representative sources of light.

The show also includes Park's amusing 2004 film, "Armored Vehicle," which he considers to be his most important work, in that it kicked off his use of semiotics in his art.

The film, "Jangap-cha," documents Park's performance piece that engaged the police in a pun, and resulted in his brief arrest.

The Korean term Jangap-cha translates to "armored vehicle," but the Korean word for "armored" is also a homonym for "glove." Park covered his car with white gloves, thus transforming it into an "armored" car, and staged an accident involving a pedestrian.

When writing up the police report, Park insisted to the baffled, and then indignant police that his vehicle was an armored car. In the end, his polite insistence wins them over. "I was able to create a new being by using linguistic play," he says.