Ages 18 and over (under 21 tickets are presale RSVP only)

KOPPS is a three-pronged attack of techno-fection, but it’s not so sugary as to gum up the works in its live show, plethora of catchy singles, or the numerous music videos that capture the band’s intense visual irony.

The Rochester trio — lead vocalist and percussionist Patricia Patrón, bassist Kyle O’Hara, guitarist Travis Johansen — has been hard at work in the studio and spinning the odometer on jaunts to everywhere. The group continues to work with local producer Dan Armbruster of Joywave.

And yes, new music is pending.

KOPPS has plenty of material, for that matter. They’re just being frugal and keeping up with the times, in which LPs aren’t as in-demand as EPs, singles, and videos.
In actuality, KOPPS has enough material for a full-length if they ever want to go that route. “But not the way people are doing it now,” Patrón says. “You don’t want to release too much; people listen to it for a day and then it’s over.” 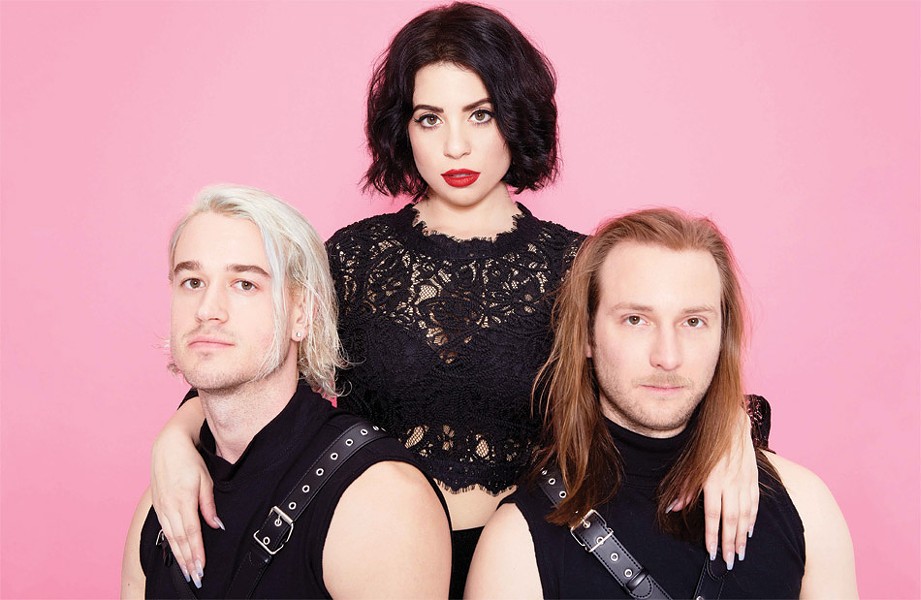 So that’s delayed the release of some KOPPS material, and the band says it’s shifting into a phase where they are more in control. Some people, including ones in their camp, didn’t quite get it.

“I don’t think I’ll work with a producer that it makes no sense to work with again,” Patrón says. “We had a couple of producers in L.A. that were picked out by our team. I think they couldn’t get a grasp that we were songwriters, but they had total control.” Naturally, the songs didn’t amount to anything.

“Of course,” Patrón says. “Because they weren’t KOPPS songs. I don’t ever want to work with someone who doesn't recognize our collaborative power. I hated working with other topliners.”

“We’re under new management and under new PR,” she says, “which has been helpful to us in putting out material more consistently. So we’ll have all this new material we’re going to package up and release this spring.”

KOPPS sees its music as pop, but not in its contemporary definition, which falls short. KOPPS is more than pop. It’s pop plus.

“Historically, our music has been pretty genre-bending,” Patrón says. “I think over the years it’s become more digestible as being pop. But there’s still some KOPPS elements to it. Not every song is a KOPPS song. It has got to have something unique, even though the underpinnings are pop. That’s where we are musically. Even in our old stuff, there was a pop element to it. But the sounds we were making were a little bit more ‘alt,’ I would say.”

KOPPS brings the electronic thunder. It’s showbiz with plenty of fizz and bizz.

“We have a little bit of an edge,” Johansen says. “It can get gritty here and there. And that plays out in the live show, that grittiness. It’s very intense. The movements and choreography are very rock-inspired. Like breakdowns with more purposeful guitar, thicker bass that have that to meld with the vocal tracks.”

“All of these things play off of each other,” Patrón says of KOPPS’ multimedia attack. Grateful that the band began using choreography a few years ago, she says it will continue to be a fun component of its live show.

“It’s different to see instrumentalists doing it,” Patrón says. “I think I’ve come a long way vocally, being able to sing and do these crazy movements. It took years to develop that breath control. It’s so aerobic.”

“We do have a light show we bring with us when we can,” she says. “The lights, the dancing, the music are all perfectly in sync."


Patrón isn’t too concerned that some listeners may not get what KOPPS is doing or what they’re about exactly. “I think everything we do has an ironic pop edge to it,” she says.

It’s difficult for the trio to digest pop that’s on the radio. “There's no underlying humor or message to make you think,” Patrón says. “There isn't an underlying anything.”

“You could listen to it one time through and think, ‘Ok, it’s about butts,’” she says. “When it’s really about being addicted to consumerism. The humor behind what we’re doing, I think it should be polarizing: Either you like us or you don’t. I want people going insane or going, ‘This is fucking stupid.’”