On a snowy Tuesday in March, Kat Schwarz zoomed into Fifth Frame Brewing with visibly intense purpose. She placed two amber glass bottles on the table in front of me, each labeled "KATBOOCHA" in bold typeface. "These are brand new!," she exclaimed. As I admired the bottle, Schwarz hopped over to the bar and returned with two glasses full of vibrant fuchsia-colored liquid. I took a sip.

Her beet-flavored kombucha (com-BOOCH-uh) had an expectedly earthy taste, elevated by the freshness of the tea. It went down smoothly. "I love it," I replied.

For the health conscious, kombucha is a great alternative to a sugary cocktail. The fermented tea drink is low-carb, low-sugar, and packed with probiotics, vitamins, and antioxidants. According to the Mayo Clinic, there is evidence to suggest that drinking kombucha may produce similar effects to taking probiotic supplements, including improved digestion and immune function.

The explosive kombucha movement is similar to that of craft beer and third wave coffee, driven by millennial trendsetters -- a group with a growing number seeking sober alternatives to a night out.

"Young people are thinking more about what they're putting in their bodies," Schwarz explains. "They want it to be something special."

Full disclosure: because kombucha is a fermented drink (it's a tea that contains a combination of bacteria and yeast in it), there is a trace amount of alcohol in it, but by law that amount must be below 0.5 percent if it's being sold as a non-alcoholic beverage. And there are over-21 kombuchas and kombucha beers on the market.

"I wanted to offer simple flavors that I knew people would love," she says.

"It's a cocktail of health, and people love it," Garman says. "We have a lot of people come to the Tap Room fill growlers with kombucha."

"Kombucha has been on our menu since day one," says Red Fern owner Andrea Parros. "We knew about its popularity with health-conscious customers, so we decided to offer it on tap. We go through about 10-12 gallons a week."

If you want to stash some in your fridge, the probiotics-packed drink is sold by the bottle at local grocery stores including Wegmans, Hart's Local Grocers, and Lori's Natural Foods. But when it comes to buying bottled kombucha at the grocery store, beware. Garman says that not all kombucha is created equal.

"You've got a lot of dead product hitting the market. When people buy kombucha, they expect it to be alive," he says, referring to the live probiotics in the drink that aid in digestion.

Some large kombucha brands such as Kevita have recently come under fire for pasteurizing product for shelf stability -- an act that can kill the good-for-your-gut bacteria that makes the drink so popular. Schwarz and Garman agree that pasteurizing kills all the good stuff. With these concerns at play, buying local product makes even more sense. "Why not?," Garman says. "You're supporting your friends and neighbors." 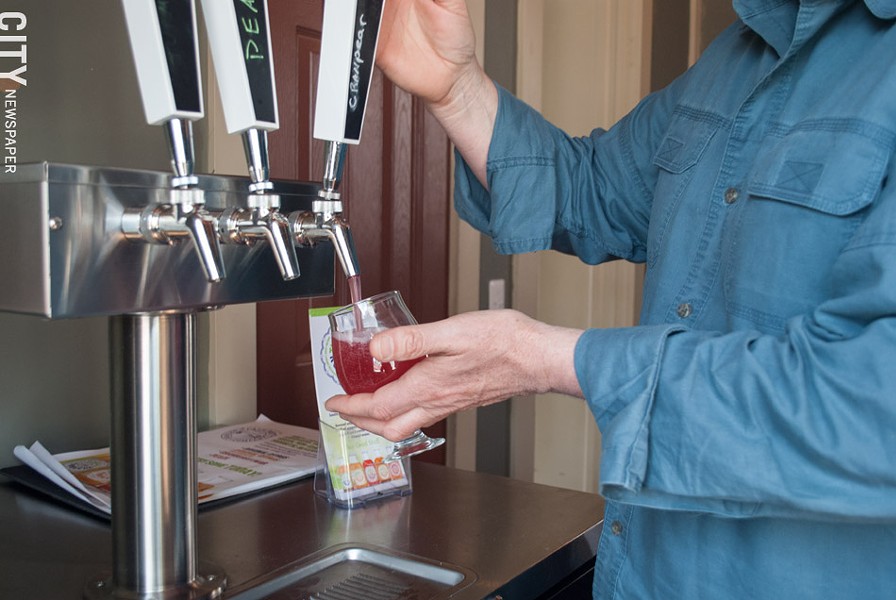 Ginger is a popular kombucha flavor, and Katboocha, Rocbucha, and KOGAbucha all offer it. The spicy root plays well with the drink's vinegar-y bite and light carbonation. Other popular flavor choices include various fruits and berries, which add a sweetness to the drink that helps the medicine go down. Rocbucha makes strawberry-basil and blueberry-mint flavors, which are both floral and light. Katboocha's beet flavor is a standout -- the unmistakable earthy flavor and irresistible pink color keep you coming back. Wade Reed, co-founder of Fifth Frame Brewing, said they keep Katboocha's beet flavor on tap because it's a customer favorite.

If you really prefer a boozy beverage, you can add kombucha to your cocktail -- Fairport Brewing Company offers kombucha cocktails on their Tap Room menu. But with kombucha on tap at more and more local establishments, there are a growing number of beverage choices for those who don't drink. "I hope Rochester becomes a place where there is a non-alcoholic option at every bar," Schwarz says.