Kolb is latest Republican to bow out

February 13, 2020
Former Assembly Minority Leader Brian Kolb has announced he will not be running for reelection. 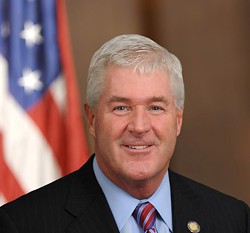 Kolb, a Republican in his 10th term, was arrested on New Year’s Eve after he crashed his state-owned SUV into a ditch in the town of Victor. He was charged with DWI. Police records showed Kolb attempted to blame the crash on his wife, stating “you know how women drive.”

The arrest came shortly after he had put out a message urging people to not drink and drive over the holiday season.

Kolb had served as minority leader since 2009, but he stepped down from the post after his arrest. He represents the 131st Assembly District, which stretches from Victor to Seneca Falls and includes Canandaigua.

Kolb’s announcement comes just a day after Republican Peter Lawrence, who represents the 134th Assembly District,  announced he would not be running for re-election. Republican Senators Rich Funke and Joe Robach have also decided not to run for re-election.

In a statement, Kolb said he decided to not seek reelection this fall after conversation with his family.

“It has been a tremendous privilege, both personally and professionally, to have served the people of the Finger Lakes Region for the past two decades,” Kolb said.