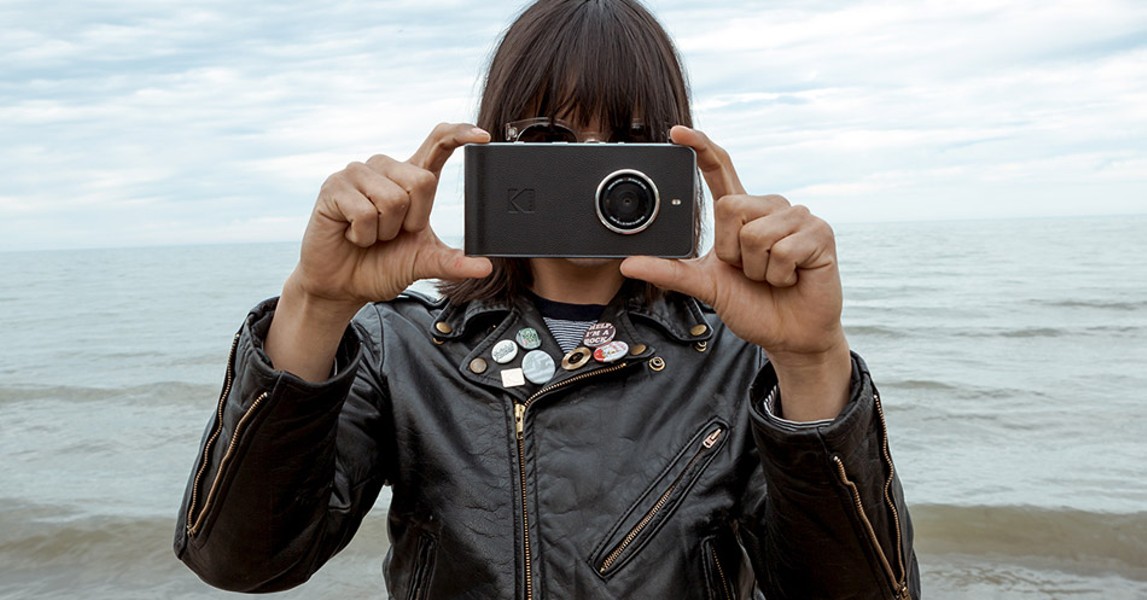 With a foot modestly in the future and a thumbs up to the past, Kodak made a daring step last week with the release of its new smartphone and DSLR camera hybrid, the Kodak EKTRA. Designed as a "camera-first" smartphone, Kodak hopes to bridge the gap between expert photographers and smartphone users. I went hands-on with the device at a release event and got a brief look at the camera's functionality and how it holds up as a common smartphone.

The EKTRA features a 21 megapixel camera sensor with f2.0 glass lens, an ergonomically-weighted body to make it feel more like a camera than a phone, and a 13 megapixel front-facing camera. Also, like a DSLR camera, settings -- such as adjusting the ISO, resolution (from 4K to 720), f-stop, white balance, and more -- can be adjusted on the fly. The device comes with a suite of Kodak-made apps exclusive to the phone, one of which uses filters and vignettes to simulate the look and feel of classic Super 8 camera footage.

Running the latest Android operating system, the EKTRA's specs meet the status quo of what should be expected in today's average smartphone: 32GB space (which is expandable with a microSD), 3GB RAM, and a 5-inch full HD capacitive multi-touch screen. Currently the EKTRA is only available on AT&T and T-Mobile networks in the US.

The built in camera features a touch screen wheel modeled directly after the settings dial on any DSLR camera: manual, film/video, HDR, Auto, Sport, and so on. When holding the EKTRA, I intuitively checked whether the rim around the raised lens rotated, thinking that it may function as a manual focus, which it did not. I saw this as a lost opportunity in design for experienced photographers. Nonetheless, the manual focus feature is still there as a touch screen function, and it gets the job done.

"It's made for photographers," a rep told me. That statement might be a little concerning. Although the camera specs are impressive for a smartphone, they're not on par with full-fledged DSLRs, and the phone itself is mid-tier at best, making it neither a camera replacement nor a reason to replace your current device. Professional photographers, in most cases, are going to have a mid- to high-range camera on them, which lowers the selling point to the professional photographer market. And since, as a smartphone itself, it's not on par with higher-end devices, the market for the EKTRA risks falling into a niche category.

The phone -- I mean camera -- does look really cool. The back is bound with a textured leather with an imprinted Kodak symbol. The cases readily available come in two types: camera pouch and camera case. Note that they aren't referred to as "phone cases." The camera case, just like the phone, is something you want to be seen holding. Stylized and tailored to look like a classic, leather camera case: it's classy and all show. Much like the phone itself, the case was designed with the "camera-first" mindset.

The EKTRA seems heavily tied to the nostalgia of Kodak's heyday, and that's tricky: anyone from the days of analog photography will have an appreciation for the phone's exterior design, but to a new generation, it'll feel more like retro-ware, which may make it a novelty more than a desired product.

A lot can be said about Kodak and its struggle for relevance in a digital age. But at the end of the day, Kodak is playing to its strengths here. Instead of a desperate plea to stay relevant, it has chosen to focus on creating a new product that also caters to its past success. That's bold, and I can't help but recognize and respect it. Still, the true test will be how relevant its nostalgia-fueled pitch will compete in the modern tech world.

The Kodak EKTRA Smartphone is available for $399.99 and can be purchased at B&H Photo Video, Best Buy, Amazon, and kodakphones.com.