March 25, 2020
The number of active COVID-19 cases in Monroe County ticked down over the last couple days, but experts see it as more a blip than a trend.

Data from the Monroe County Public Health Department show that more people have gotten better and been released from isolation than have been diagnosed with new cases of COVID-19 over the last two days.

Still, Dr. Emil Lesho, the hospital epidemiologist at Rochester Regional Health, said both national and local models consistently predict that the peak of the epidemic is yet to come in Monroe County.

“I think you have to interpret the bits — the small bits of data with extreme caution,” Lesho said. “I would not put much faith in them at all.”

Local epidemiologists and public health researchers described an array of reasons that the data likely does not reflect the reality.

Some samples sent to commercial laboratories for testing take days to return results, while others tested locally are usually available in 24 hours. “You might be seeing some data from a week ago being presented at the same time as data from today,” Lesho said. “That’s not an accurate picture.” 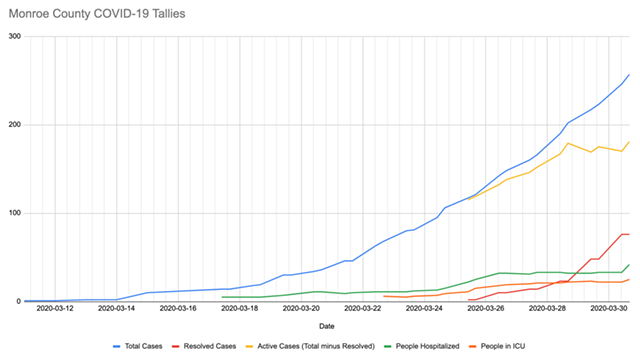 In addition, daily testing totals are inconsistent. If fewer tests are run on a particular day, that day will likely show a lower number of positive results.

And the shortage in local testing capacity means the number of cases confirmed is much lower than the number of cases actually circulating. Even people with many of the symptoms of COVID-19 cannot get tested, guaranteeing an undercount of the true extent of infections.

Lesho said local, regional and national models all predict that the peak of the epidemic is still weeks away.

Like any projection, small differences in initial data can result in widely disparate estimates of what will happen at the peak.

But people familiar with the models in use at Rochester Regional Health and the University of Rochester Medical Center said they uniformly show hospitals overflowing with patients. County officials are also planning for that spillover.

“We’re going to be beyond — we’re going to exceed our bed capacity,” Lesho said. “No matter which model you use, that capacity will be exceeded.”

But the curves are not unbendable. Epidemiologists said the factor that had the most impact on the shape of the peak was the extent of social distancing.

The tick downward in active cases over the last two days should not be taken as a sign to release those restrictions, Lesho said.

“We can’t let our guard down just because we have what looks like a good couple of days.”

Brett Dahlberg is a health reporter for WXXI News, a media partner of CITY. He can be reached at bdahlberg@wxxi.org.