Kings of the mountain

(This story has been updated and revised to accurately reflect details concerning King Buffalo's chronology and tour itinerary.)

King Buffalo's music is big, bold, and beautiful. The band looms, aggressively atmospheric, treading some trippy air in the process; meticulously constructed sounds  grow before your very ears. It envelops. It is epic.

King Buffalo is frequently pegged as "stoner rock." The three members of the band — Sean McVay on guitar and vocals, drummer Scott Donaldson, and Dan Reynolds on bass — aren't opaque or stubborn about discussing whether King Buffalo fits in that idiom. But whether the band's playing on a big festival stage, in a sweaty dive, or in the studio, King Buffalo just isn't interested in making the distinction anymore.

McVay comes clean: He has his doubts.

"The stoner rock community has really been supportive and great," he says. "But it's not really our sound. I don't know if we ever really were stoner rock. I think we play heavy psychedelic music that could be, could be, lumped in with that sort of thing. We've always been the black sheep of the genre. We're not like Fu Manchu or like any of the classic greats."

Jams flow freely from King Buffalo, but remain tethered. This isn't a free for all, after all. McVay typically starts it off with a swirling, hypnotic guitar drone as the rhythm section lies in wait to drop in at the appropriate spot. By the time the band is rolling at full steam, Reynolds' bass line plateaus and Donaldson's drums rumble, with a lot of emphasis on the toms. And the vocals come in like Pink Floyd singing a Gregorian chant in church. The music seems to dive skyward, building and building to an angry crescendo before settling back down like a spent beast.

Spin King Buffalo's latest album, "Longing to Be the Mountain," and it's readily apparent. There's the hazy lope of the opening track, "Morning Song," which swings lackadaisically only to pound out its outro in sweet relief. Track three, "Cosmonaut," comes in wide-open to the sonic possibilities. It's full of jangly, psychedelic guitar, and again the band's intense volume and tone build up to a beating. 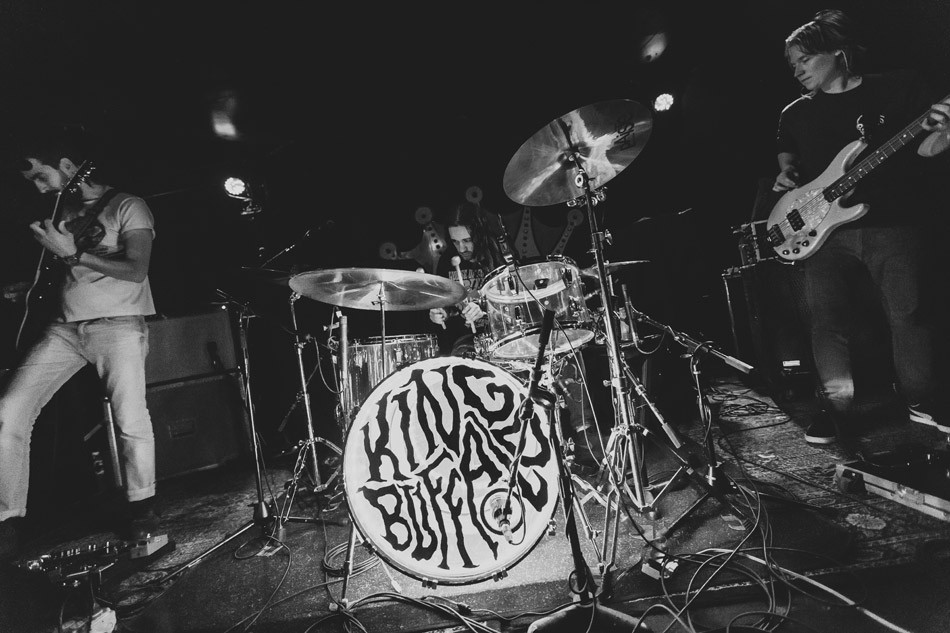 Once King Buffalo came together in 2013, out of the ashes of Abandoned Buildings Club and Velvet Elvis, it hit the ground running, releasing its own material despite encountering obstacles like the lack of support from a record label.

"We're in the age of the Internet," Donaldson says. "People found out about us rather quickly because we put out our first demo for free on Bandcamp. How else are you gonna do it nowadays? You don't get radio play like you used to."

From the beginning, King Buffalo was hunting for its place and its identity, solidifying itself within established genres.

"I think it took some time for us to figure out what our sound was gonna be," McVay says. "It took a few years of playing together to say, 'This is our formula.'"

Donaldson says the band has always played what it wanted to play. Peri-fuckin-id.

"We didn't decide, 'Once we get to this level we'll make decisions to play the stuff we like,'" he says. "And if we get lumped into a genre, that's fine. Hopefully the people that liked us when we started will continue to like us."

King Buffalo has kept up with the demands of doing it down-and-DIY, relying on itself to get releases out to fans. Beyond its own albums, the trio has also played on a Jimi Hendrix compilation released by Magnetic Eye Records.

The band has also had help with overseas distribution from the German label Stickman Records, and been invited by Elder guitarist and Stickman employee Nick DiSalvo  to play overseas.

Donaldson received DiSalvo's phone call and cracked wise. "I said, 'We'll totally do that if you'll take us to Europe on tour," Donaldson recalls. "He kind of laughed it off, but three months later we were on tour in Europe with them."

King Buffalo is skirting the big time, but not too big — not big enough to hate, anyway.

"We're not big enough for people to get online and say 'This band sucks now,'" McVay says. "They might, but I think we're doing pretty OK."

In particular, the band has gained a foothold in Europe. "I think our music is accepted and considered a little more mainstream in Europe than it is in the States," he says. "There just seems to be more people hungry for heavy psychedelic music in Europe."

This appetite can be found especially at festivals that specifically cater to this kind of music. In the past few years, King Buffalo has played at festivals all over Europe: Bukta (Norway); Black Deer (UK); Desertfest (Berlin and London); Duna Jam (Italy); Red Smoke (Poland); Freak Valley (Germany); and Lake on Fire (Austria), to name a few.

There are big crowds and little crowds. The band doesn't play at these big outdoor soirees night after night, though, and crowd sizes vary wildly.

"Even on tour overseas," McVay says, "We were playing smaller clubs in cities we hadn't been to before. It's always interesting playing over there: We'll play to a few thousand people one night and the next, we'll be in Bologna, Italy playing to 50 people in a small club. It's fun to mix it up. With the festivals, the sound is always good and there's a different kind of energy. A sweaty rock club can be fun, too."

"Unless it's empty," Reynolds says. "Then it's just a sweaty bar and it's depressing."

McVay says he and the others are looking for common ground, blurring the line between audience and artist. "It depends on the culture of the room sometimes," he says. "When it's a small club, they'll still interact with you. And they let you know if they like it or not. That engagement is good."

"Festivals are better because we're not under pressure to bring a crowd," Donaldson says. "Festivals are a whole different animal."

"And they're probably not there to see us anyway," Reynolds says. "So we get some new fans hopefully."

On November 8, King Buffalo embarks on a 12-city US tour. In its live performances, the band brings the heavy heat with songs discovered and explored, then forged into permanence in rehearsal. "For the most part, it starts out with long jams," McVay says. "We record everything in our rehearsal space. We record hours and hours of jams and riffs. Usually I'll take it home and listen — 'Oh that 10 minutes were cool' — and we'll start to formulate and adjust the structure. The lyrics come from there."

"He's the recording wizard and he's got it all rigged up," Donaldson says of McVay. "Whether it's something Sean brought in or in a jam, we can kind of sense, 'This is done. We can't jam on this anymore.'"

And even with that self-imposed ceiling, King Buffalo songs frequently clock in at over 10 minutes. Generally, the trio sticks to the script. "Usually, we write them, and play them as they are written," Reynolds says.

"There are definitely some songs that we let go and improvise," McVay says, "but we don't want to jam so much that it's jarring."

Reynolds points out the practical challenges that long improvisations can present when relating to their fans. "It's hard to make a video out of a 13-minute song," he says. "Or when you have a 45-minute set to fill: 'Which of our 20-minute songs do we play?'"


With the 2016 album "Orion," the songs had a sense of urgency. The band needed product. There was less polish and thought; there was more spontaneous energy.

"What I really treat as the beginning of what is now King Buffalo is the 'Orion' record, our first full-length," McVay says. "That's when we figured out what our sound was really going to be."

Named for the pride of Poseidon's loins, the album sounds to McVay like a "heavy, fuzzy blanket," while the 2018 EP "Repeater" included more improvisation and more synthesizers. "Longing to Be the Mountain" drew from both sound worlds. "We wanted to be as soft as we'd ever been, and loud and rock 'n' roll at the same time," he says. "So that was our dynamic record."

King Buffalo plans on releasing both an EP and an LP next. Each medium scratches its own itch. "I think you can get a little weirder on an EP," Donaldson says. "You can do what you want. It's a short release, where I think an LP needs to be a little more complete."

"I like EP's when it's a cohesive thought and it's meant to be an EP," McVay says. "I like it to be a snapshot, not just a collection of songs."

Talking to the band, you can get a sense of its perseverance, its dedication, and the musicians' mutual admiration for one another. It seems nothing could bring them down or prompt them to quit.

In the van, it's pretty boring, all three guys say. There are no alcohol or drug problems or emotional baggage that can derail a tour fairly quickly. "We're pretty quiet," McVay says. "Lots of talk radio. We go to bed early."

Though they come from this dirty little city along the mighty Genesee, a King Buffalo sighting in Rochester is becoming increasingly rare. When the band is home, and not recording or playing a gig, the guys like to go and see local favorites like Overhand Sam or False Pockets.

On first glance, the guys in King Buffalo don't seem like world travelers. But the band you'll see on the Bug Jar stage, November 23, has played on the Italian island of Sardinia, been wowed by the mountains in Norway, and dealt with shady promoters — like one in Tulsa, Oklahoma, who came up short with the band's bread.

Reynolds remembers him well: "He tried to pay us in precious gems and CD's."