King Buffalo reflects on quarantine with 'The Burden of Restlessness' 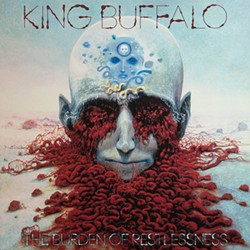 “The Burden of Restlessness,” released June 4, is the third studio album by the Rochester-based trio King Buffalo, and the first of three full-lengths the band will release this year. Recorded during the pandemic, the new effort pushes the trio’s heavy psych-rock elements to new heights and serves as the group’s darkest release yet.

Throughout its 40-minute run time, the new album is a culmination of the horrors felt through the COVID-19 lockdown. The songwriting conveys the muted emotional response caused by social isolation and depression. “Don’t think I wanna wake no more, don’t think I wanna live no more,” sings frontman Sean McVay on “The Knocks.” The track’s deep undercurrents of frustration and aggressive pulse perfectly coincide with the spaciousness of the band’s intensifying grooves and foreboding energy.


King Buffalo’s sense of urgency begins on “Burning,” a complex and tribal-like opener that crescendos into a hypnotic atmosphere that’s reminiscent of early Tool. On the brooding “Hebetation,” the trio breaks out the fuzz-induced riffs and trippy synths, building on the spacey electronics featured on last year’s EP, “Dead Star,” but with a heavier result.


The standout “Silverfish” is a prog-rock juggernaut, but its clear storytelling unravels the human psyche when “drifting away” from sanity. The explorative “Grifter” masters its slow, heavy buildup with a wave of sharp guitar chugs and lofty vocals before gravitating toward a massive wall of psychedelic bliss. The closing track “Loam” exemplifies the album’s cohesive atmosphere with its exquisite guitar textures and boiling rhythms. The song also brings a sense of optimism and resolution to the album’s narrative of self-actualization. “I’m shedding the burden of restlessness / To rise from the loam of the nothingness,” McVay sings.


Not only does King Buffalo realize the bridge between progressive heavy rock and psychedelia, but its latest offering is daring and impressive. No matter what’s next for the trio, “The Burden of Restlessness” is one of 2021’s best releases so far and a fitting document of these stagnant times.