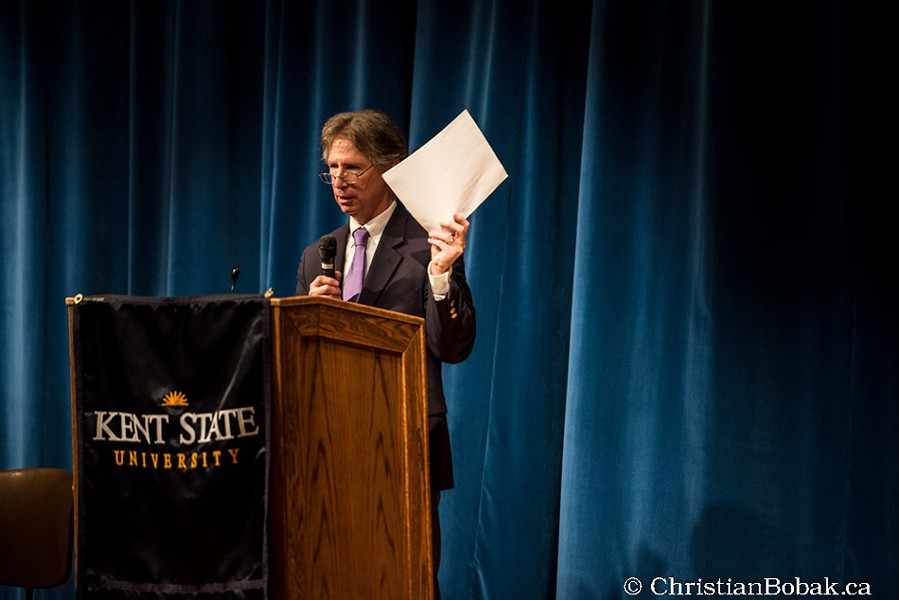 SUBMITTED PHOTO Thomas Grace, a student at Kent State University in 1970, was wounded in the May 4 shootings.

Ohio's Kent State University was a tinderbox during the last week of April in 1970.

Thomas Grace, author of "Kent State — Death and Dissent in the Long Sixties," was a sophomore at KSU at the time. A series of events heightened student opposition to the Vietnam War, which escalated with President Richard Nixon's decision to invade Cambodia, he says. Grace describes it as the "last straw" that sparked a tsunami of antiwar protests across the US, including at KSU.

When B-52's dropped more than 700 tons of bombs on southeast Cambodia on May 1, 1970, it was clear that the war was expanding. The National Guard arrived at KSU after a tense weekend of student protests. Then the protestors set the campus's ROTC building ablaze.

But what happened on Monday, May 4, 1970, preserved forever in an iconic photo by photojournalism student John Paul Filo, stunned the nation.

Though the National Guard's presence was meant to quell the protesters, it actually drew more students in, Grace writes.

"By noon, thousands of people — students, professors, three hundred active protesters, and curious onlookers — had filled the natural amphitheater," he writes. "The Commons was the crossroads of the campus, and some were merely passing through on their way to class or lunch."

Soldiers lined up along the northwest side of the Commons, with most carrying .30 caliber ammunition in eight-round magazines, he says. Before long, the air was thick with tear gas, making it difficult for the guardsmen to distinguish between protesters and onlookers. Protestors taunted the guardsmen.

"One guardsman with a pistol shot first, and then the others opened up," Grace writes.

When the confrontation was over, four unarmed student protestors were dead and nine other people were wounded, including Grace; a bullet tore through his left foot.

Grace, who is also an adjunct professor of history at Erie Community College, will be at the Fairport Historical Museum, 18 Perrin Street, at 10:30 a.m. on Saturday, June 11, to discuss his book on the Kent State shootings.

Though politically active students protested the war on college campuses throughout the country, the bloody event at Kent State was a seminal moment in the antiwar movement and Richard Nixon's presidency.

Grace, who says he's had a lifelong fascination with Civil War history, didn't turn his attention to Kent State until recently, in part because many college students he meets don't understand its significance, he says.

"There's a lot of historical amnesia in the US," he says.

Many people have forgotten how visceral the division in the country was over Vietnam, Grace says.

"Kent State was not a story that had a 24- or 48-hour news cycle," he says. "It dominated the headlines and the discussion throughout that entire month of May. For many people, it lingered not only for months, but for years afterward."

Grace says that contrary to some assertions, the protestors were not close enough to be a danger to the guardsmen.

"The people who were killed at Kent State were shot at quite a distance from the men who shot them," he says.

Grace says that he was 200 feet from the guardsmen, running with his back facing them, when he was shot.

Other misconceptions persist, too, he says. Many Americans were convinced that the student protesters on campuses such as KSU were spoiled brats bent on destruction: an idea promoted by many prominent politicians, Grace says.

"The Vietnam War by 1970 was extremely unpopular," he says. "At the same time, the protesters were equally unpopular because students were often perceived as privileged individuals who had the opportunity to go to college while other people had to work for a living."

But most of the students at KSU were not from upper-income households, Grace says. Many were the first members of their working- class Ohio families to go to college, and many had to work part-time and during the summer months to pay their tuition, he says.

College enrollment was also viewed by many as merely a way to dodge military service, Grace says. But most draft-age young men were acutely aware of the war, regardless of whether they were in college, he says.

Grace tells the story of Donald Angerman. Angerman was in college and reasoned that the war would still be going on by the time he graduated, so he decided to enlist and satisfy his military obligation after his sophomore year. Then when he left the service he could use his education benefits to finish college.

"He had an M60 machine gun he named Lucy, but he wasn't in Vietnam long before he realized he had made a terrible mistake," Grace says. "He wished more than anything that he could go home. But on April 27, 1968, he was out on patrol and either a grenade fragment or a rifle-shot from a sniper ricocheted off his machine gun and struck him in the head, killing him instantly."

Grace says that Angerman's loss was obviously felt by his family, but was also how KSU students experienced the war: through the deaths of brothers, friends, and fellow students.

A lot of people were surprised by the shooting at Kent State, and Grace says that the great lesson is that they shouldn't have been. Angerman's death exemplified that the protests were about more than ideology and free speech, he says.