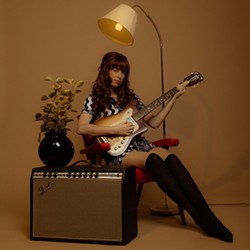 Her debut solo full-length album, “Friend of a Friend,” released March 4 digitally and on vinyl, finds Morey — who has been a contributing writer for CITY — exploring her creativity further with material that incorporates a wide vision.

Morey wrote all of the album’s songs, building tunes around clever lyrics, such as “I wonder how much pretending we do to survive.” She doesn’t give you characters in her songs — Morey gives you herself, and her voice is refreshing and easy to take in.

Her husband, Ben Morey, who shares writing credits on the song “Deep End,” engineered the recording at Submarine Sound Studios, which adjoins the Brighton music school the couple founded. She enlisted a host of contributors, including multi-instrumentalist Becca Ryskalczyk as well as backing vocalists Mikaela Davis and Cammy Enaharo.


The single “Trial by Fire” kicks off slowly with a western-cinematic vibe. Guided by Morey’s hypnotic lead vocal, the song surprisingly transitions toward an instrumental jam with jazz elements, reflecting a band in full swing. A catchy choral section reminiscent of Sergio Mendes & Brasil ’66 elevates it to greater heights.

“Hotter Than Heaven” and “Scavenger Bird” are thoughtful, experimental, and atmospheric. Both are piano songs with melodies that hug the chords.


For Morey, “Friend of a Friend” appears to be a sign of things to come. With her affiliations and several albums under her belt, this record builds her reputation as a key figure among Rochester-area musicians.

Roman Divezur is a freelance writer for CITY. Feedback on this article can be directed to dkushner@rochester-citynews.com.