September 23, 2017
There truly is something for everyone at Fringe. And that includes kids. Friday evening, I stepped into what felt like a storybook come-to-life in "Really Rosie." The production at Blackfriars Theatre combines music by the incomparable Carole King with lyrics by Maurice Sendak (of "Where the Wild Things Are" fame) and an energetic young cast. It's the kind of production that will suck the kids right into the arts (a 4-year-old in the front row was mesmerized from what I could tell).

"Really Rosie" is about Rosie, a larger-than-life young girl with stars in her eyes and dreams in her head of being a big Hollywood movie star, set on the stoop of her Brooklyn home. Danica Simpson — decked out in a red dress, matching boa, floppy yellow hat, and elbow-length gloves — plays the titular character with gusto, belting out notes and giving attitude left, right, and center. Rosie leads her (sometimes reluctant) friends through the motions of auditioning, casting, and then performing the "movie" about her life.

The 4th through 9th graders in the group each get time to shine. Alligator (Joseph Gregoire) runs through the A-B-C's of being a kid — from "M, Making Macaroni" to "T, Throwing Tantrums" — with solid comedic flare. Book-nerd Johnny (Reece Gurell) manages to hit some impressive high notes during "One Was Johnny." And Pierre (Alexander Steele) finds the humor easily in his character's apathetic role toward Rosie's playtime plot.
Kathy (Gracie Maguilli) dazzles as Dracula's wife in "Screaming and Yelling"; she's a natural showman who gives Rosie a run for her money. Joshua Benningsohn's talents feel underutilized in his role as Rosie's kid brother, Chicken Soup: He's offstage for much of the show, but really turns it on in "Chicken Soup with Rice."

The plot line and dialogue are relatable for kids, the songs are quite catchy, and there are enough of one-liners in there for the parents in the audience to keep everyone entertained.

"Really Rosie" will be performed again on Saturday, September 23, at Blackfriars Theatre. 1 p.m. $10-$15. Appropriate for all ages. 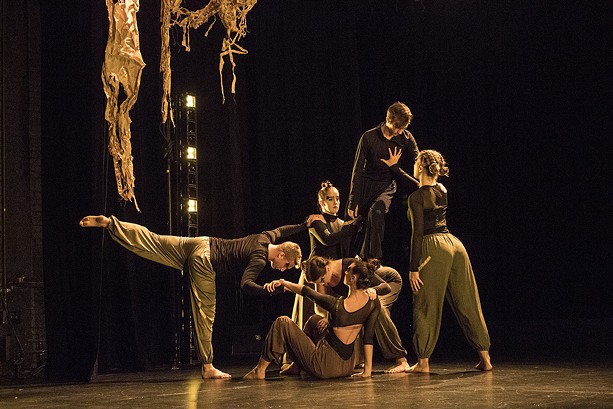 Choreographers James Hansen and Heather Roffe are back for their fifth Rochester Fringe with "Merged V." The duo (who are professors of dance at the College at Brockport and Nazareth College respectively) again brought a signature style of movement, combined with multi-media and thought-provoking themes, to Geva Theatre with four pieces, three of them new.

The first, "element all," choreographed by Roffe, feels post-apocalyptic. A group of six dancers start in a pyramid of sorts and begin to shift, with swift, sharp movements. They then move seamlessly between crisp, sometimes robotic motions and more elegant arabesques, pirouettes, and lifts. They work effortlessly as a team, supporting one another as they spin, ready to lift a partner with seemingly no notice. The music here also combines elements of what sounds like communications tower interference. It's jarring, but that appears intentional — as the dancers all stretch their hand to the sky, then gently bring it back to their faces, it feels like they're remembering they are human.

"Revival" has a more spiritual theme. Hansen uses three dancers — and songs like "If That Isn't Love" by Elvis Presley, "One Day at a Time" by Wanda Jackson, and "Ave Maria" by Olivia Newton-John — to explore the human connection to a greater power. Dancers Christy Benincasa, Devon Monin, and Roffe begin by crawling across the stage, until only one is left to begin a solo. The routine starts out largely on the floor, but as each subsequent dancer rejoins her on stage, the dance becomes more upright and more intertwined. I actually got chills as two of the dancers supported another as she leaned back and collapsed into their arms. It was breathtaking.

"Lovely" featured several Brockport student dancers. At first, the group stood in a line, moving in groups to what sounded like an old record of 1950's advice on cleanliness and appearance. "Don't wear too much lipstick!" "Clean under your nails!" "That's a good daily habit!" cheerful voices shouted as the dancers leaned forward and stumbled to the ground one by one, while others performed lifts around them. Eventually, Frank Sinatra's "The Way You Look Tonight" came on and the piece took on a jazzier feel. They sometimes broke off into partners, pulling apart and spinning around as if they were swing dancing. The ending was a bit jarring and confusing, but overall the piece was intriguing to watch.

The final piece, "Not Your Baby," choreographed by Roffe, started out with three dancers facing the back of the stage, every so often jutting their arms out like arms of a clock. It was almost as if someone got into an elevator and then turned around to face the other way; it made me feel strangely uncomfortable at first. But that melted away as the music shifted to something reminiscent of a Russian folk dance. Each of the three dancers let the stiffness of the beginning of the routine fade away as they begin to bounce around the stage, legs extended in beautifully clean lines.

"Merged V" will be performed again on Saturday, September 23 at Geva's Fielding Stage. $10. Appropriate for ages 13 and older.