Kathy reviews Murder Mystery at the Central Library and 'Bushwhacked' 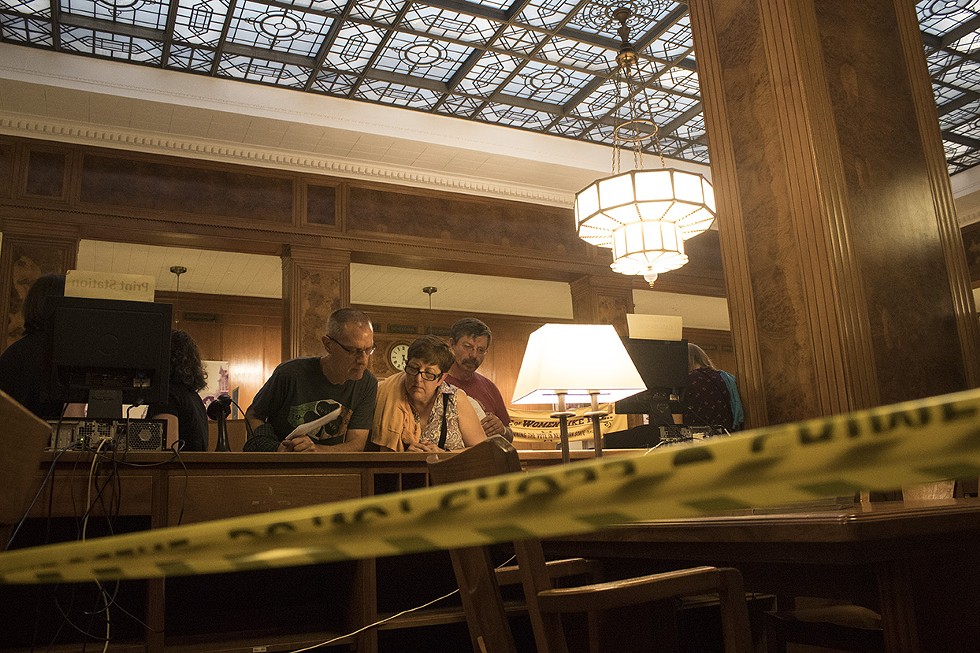 Part of the fun of the Fringe is not only seeing shows, but becoming immersed in them. Both Murder Mystery at the Central Library and "Bushwhacked: Crystal Magic Wonder Cabinet Palace Tent" fit that bill.

Walking into the library on South Avenue, I quickly noticed the beautiful old building was adorned with crime scene tape, fingerprints, and pictures of the usual suspects. It was like entering a real-life version of Clue. Each of the 100 or so people that were there got their own fact sheet and packet to take notes, and then were allowed to peruse the various stations throughout the first floor — suspect photos, fingerprints and backgrounds, evidence, and the crime scene itself — to figure out whodunnit. My fellow amateur sleuths ranged in age from about 5 to 70 or so, and represented all cross sections of Rochester life.

The clues were well written and provided enough context to get even the junior detectives to the right conclusion (although there were a few red herrings along the way). This being the first year for the show, it was apparent that the organizers were a bit overwhelmed by the large turnout. Many people resorted to taking photos of the stations on their phone and then going off somewhere else to do their detective work because of overcrowding. A larger font on the poster boards would have made the clues easier to read (perhaps I should have brought a magnifying glass to complete the experience).  But the reveal of the murderer at the end of the hour made the small frustrations along the way worth it.

This was the only time during the Fringe that the Murder Mystery was held.


My second show was far less spooky and more whacky. The ladies of "Bushwhacked" are back with a slightly bigger tent and a new ringmaster, Rain Bowman. Shirley and Sheila are hilarious, and are in character from the moment they step out of their tent, cocktails in hand and feathers in their hair, for a quick meet and greet of their 10 audience members. There isn't room to be shy with such a small group, and we were asked to bond by coming up with a spirited chant of praise. "Bananas Wa-wa-wee-wa!" we all shouted as Shirley and Sheila shimmy around in their sequined skirts and bras showing us the art of "Pole Dancing" (not what you're thinking) before roping audience member Frank (quickly dubbed "Frohnk") to try it out.

Audience participation is key to this one and no one leaves unscathed. My purse got stolen by a rubber chicken during a Hungarian puppet show, while others lost their rings and phones to magic tricks along the way. Luckily, I managed to avoid the "Splash Zone."

This zany, hour-long production is mostly unscripted from what I can tell, but Shirley and Sheila are fast with their responses and zingers. The duo bounce one-liners off one another, the ringmaster, audience members, and whoever is willing (or not). You can tell they're having fun, and in such close quarters, it's hard not to join in.

"Bushwhacked" is sold out for the remainder of the Fringe.