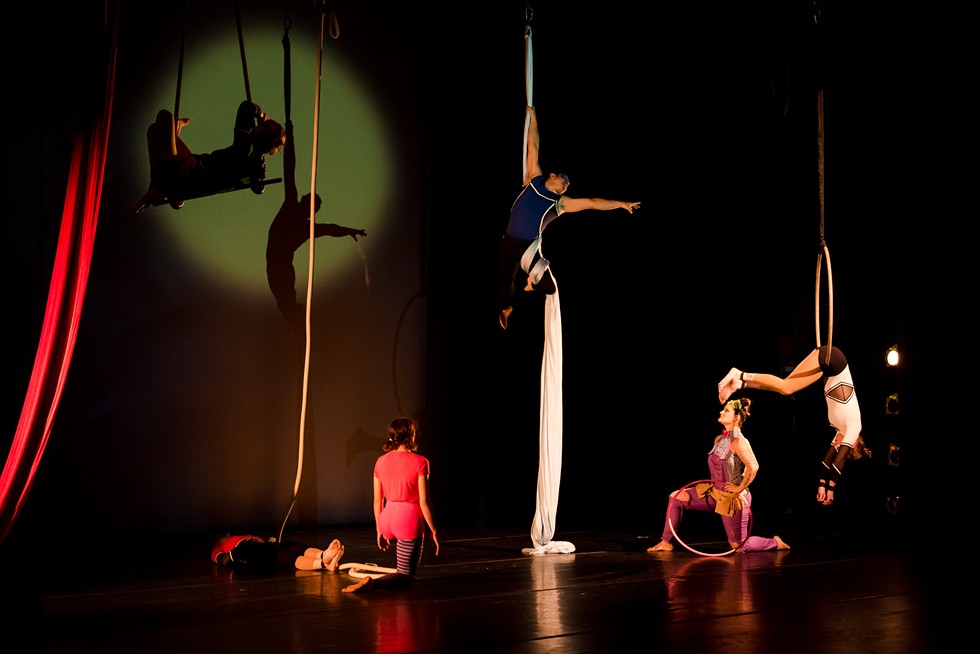 One of the most respected hoofers in the Rochester area, Cheryl Johnson, is putting her entire tapping career on display at the Lyric Theatre at this year’s Fringe Festival with her show "Lost in the Shuffle." And the styles are as varied as they are incredible to watch. Johnson shuffles and shim sham shimmies across the stage – bare except for a thin piece of wooden staging, two microphones and music stands – dancing to everything from Bach to blues to bebop with ease.

Johnson guides the audience through her storied career in both song and dance, paying homage along the way to so many late, great hoofers she has worked with: Buster Brown, the Nicholas brothers, Gregory Hines and Arthur Duncan. The inspired her to improve and experiment with various rhythms and styles. She’s recently started playing with a sound looper, which she tapped a percussive accompaniment into before playing it back and dancing the melody out. Her tapping – from the paradiddles to the maxi fords and every step in between – is surefooted, but not braggadocios. She even invites the audience to stand and dance along to songs from Earth, Wind & Fire (some of the best hoofin’ music out there, in my opinion) and Aretha Franklin. She even performs a tap dance tango with dramatic flair.

Joining in to trade phrases with and dance alongside Johnson every so often is Katherine Kramer. Later in the show, she takes the stage to perform a poem she wrote while tapping. The result is comedic, moving and impressive. Sadly, Johnson ran out of time to finish all the routines (“I packed too much in!”), but still ended on a classic note, by invited hoofers in the audience (yours truly included) to be a part of her continuing career and do the shim sham shimmy.

“Lost in the Shuffle” will be performed on Sunday, September 16, at 11 a.m. at the Lyric Theatre in the Cabaret Hall. Tickets are $5 and the show is appropriate for all ages.


At 5’3”, it’s rare that I’m the tallest person in the room. But it felt that way when attending “Fairy Tale Ending: The Big Bad Family Musical.” Think “Into the Woods” meets The Usual Suspects. Jill (an engaging Madi Zabawa) leads the cast of familiar fairy tale villains through interrogation after she learns the usual happily ever after endings have changed. From the Big Bad Wolf (Jaden Apple) who ends up in therapy for pork addiction, to a Valley Girl-ish Goldilocks (a scene-stealing McKenna Light) who like totally doesn’t even give a care about ruining the three bears’ chairs, porridge and beds, to the Troll (Emily Yancey) who blows up, then uses the Billy Goats Gruff in her cosmetics line – everything is slightly wrong (but oh-so-amusing).

The cast of youngsters delivers joke after joke about the beloved tales with solid comedic timing and sincerity. Zabawa, Light and Yancey are standouts when it comes to the songs, gliding through the notes with ease and talent beyond their years. It’s especially tender as Jill realizes why the stories are changing and who – or rather what is to blame. It’s a fun romp through stories that everyone knows and is a show that people of any age (or height) will enjoy.

“Fairy Tale Ending: The Big Bad Family Musical” will be performed on Sunday, September 16, at 11 a.m. at the School of the Arts Allen Main Stage Theatre. Tickets are $10. The show is appropriate for all ages.

Darren Stevenson takes the phrase “the show must go on” very seriously. The mastermind behind PUSH Physical Theatre managed to break his big toe just days before the festival began – “doing something heroic,” he explains, adding “not something stupid like walking into a door.” So with pain killers in hand and a great sense of humor, Stevenson is charging through alongside his company, as they debut new works before embarking on a national tour.

The show has a little something for everyone: it’s part dance, part acrobatics, part miming, part comedy and all storytelling through movement. Interludes by Stevenson explain the motivation behind the movement: from an inventive electro piece where the PUSHers use flashlights to highlight their bodies’ isolations, with the light dancing as they do across a dark stage, to a touching piece about a visit between a grandmother with Parkinson’s and her daughter and granddaughter.

Stevenson’s physical comedy chops are on full display on “The Pew,” inspired by what his father (a pastor) saw parishioners doing during his sermons. Stevenson switches flawlessly between four characters: a grumpy old man, a fidgety 3-year-old, the practically narcoleptic parishioner and himself – all of whom eventually find the love of God in their hearts.

The whole troupe shines in an inventive routine dubbed “The Red Ball.” They use iPads and sleight of hand to chase the titular ball around the stage, with it eventually changing into a laser pointer, which one PUSHer gently caresses around the stage. Their final piece, “Galileo,” is the real showstopper though – with a feat of strength, agility and control that proves Stevenson is either the toughest guy in showbiz or has really, really good painkillers (or perhaps both).

PUSH Physical Theatre will perform again Thursday, September 20, and Saturday September 22, at 7 p.m. at the School of the Arts Allen Main Stage Theatre. Tickets are $18. The show is appropriate for all ages.


I closed out my evening with another show of strength, agility and artistry through movement. “Elemental Guardians: A Cirque Superhero Story” uses a somewhat loose story about a little girl, Molly, meeting her favorite superheroes to let a team of eight aerial artist spin, twist and dangle high above the crowd. The circus-like stunts get increasingly more difficult as our four Elemental Guardians learn the value of teamwork as they try to defeat their nemeses and save their friend.

And that theme applies to their acrobatics too – with many of the Guardians, their handler and even Molly performing duets on silk fabrics, aerial hoops, hanging loops and a trapeze. At one point, one of the superheroes looped his legs through the fabric and dangled upside down in a full split for what seemed like 2 full minutes, as he lifted and flipped his fellow superhero into dramatic poses. I audibly gasped when she did a death drop that had her dangling headfirst inches from the stage. While the performers make it look easy, the amount of arm, leg and core strength, not to mention agility and flexibility it takes to pull off these moves is truly super.

“Elemental Guardians” will be performed on Saturday, September 22, at 11 a.m. at the School of the Arts Allen Main Stage Theatre. Tickets are $15 and the show is appropriate for all ages.