Kathy reviews '13 the Musical' and the 24-Hour Plays

September 18, 2017
For an hour and a half on Monday night, I was transported back to my teenage years. "13 the Musical," performed by members of the Lyric Voices junior show choir at the Lyric Theatre, is a charmingly irreverent and surprisingly funny musical that tackles issues that every teen has faced: being liked by their peers, being betrayed by fellow teens, your body and hormones, and desperately wanting to grow out of it all. The show is sort of in the same vein as hit broadway musical "Dear Evan Hansen," with a more PG plot.

We meet Evan Goldman (Noah Baisch) after his parents' divorce, and as his mom plucks him from New York City and moves him to Appleton, Indiana, on the verge of his Bar Mitzvah. Determined to make sure the big day goes right, he tries to befriend the "right" crowd. Initially, he finds kinship in Patrice (Mya Vanderbrook), who is sweet, but not afraid to call him on any BS. When he betrays her to get the popular crowd to come to his party, it sets off a series of schemes and love triangles that cause him to question his own intentions.

Don't let the name of the musical or the ages of the performers fool you, they've got some chops.
Vanderbrook belted out the notes with power and surprising tenderness for a young woman her age. Quarterback Brett (Vincenzo DiPasquale) and his two lackeys, Eddie and Malcolm (Aiden Eddy and Aden Bany Ata, respectively) pulled off a hilariously cheesy slow-jam love song to get the nice girl, Kendra (an energetic Ava Papadakos) to go out with him.

The show's cloying cuteness is cut by some of the issues many of us face in teen-dom: insults ("No really, you're not that fat"), backstabbing, and manipulation. Kendra's best friend, Lucy (a cunningly devious Ella Smith), is quick to start up the rumor mill to get Brett all to herself. Meanwhile Evan uses Archie, a kid with a neuromuscular disorder and arm braces, to try and get the popular kids to like him.

The show did suffer from a few minor technical missteps. The band was a bit overpowering at times, making it hard to hear the young voices on stage, and there was an uncomfortably long beat where one actress was waiting for another to make their entrance. That aside, "13 the Musical" was a fun look for those of us who have grown up at how silly we were during those years, and perhaps could serve as a lesson for those still living through "13" about how to navigate the choppy waters of adolescence.

That was it for "13 the Musical" at Fringe, but look out for more Lyric Voices events at lyrictheatrerochester.org. 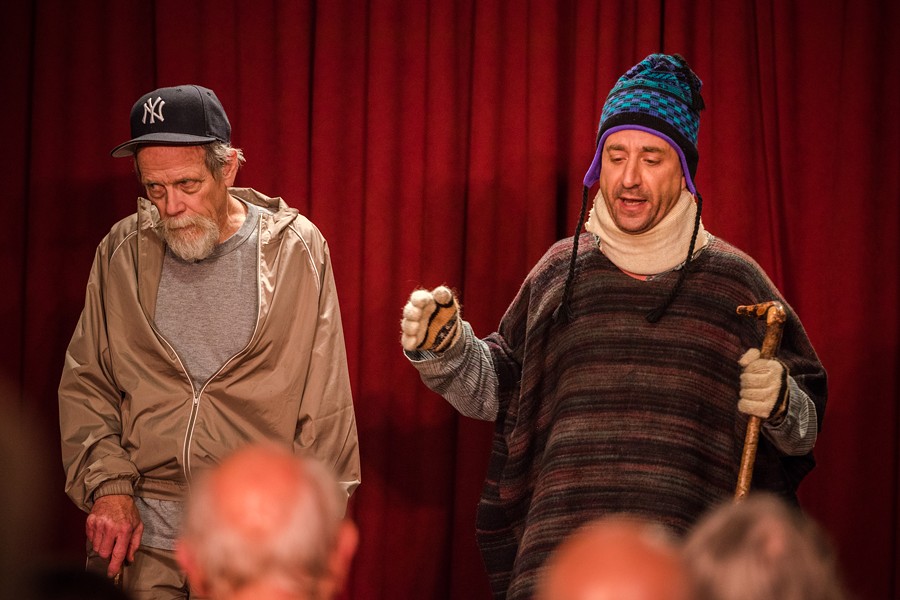 This was my third year seeing The 24-Hour Plays and I'm still amazed at what comes out of it. The concept is that a group of local writers, directors, and actors meet, conceptualize, write, rehearse, and then perform a show for two (sold-out) crowds at 7 p.m. and 9 p.m. the next day. Most productions take years to write and weeks to cast and rehearse, so these productions really should be commended.

There were just five shows this year (fewer than in years past if my memory serves), featuring 11 local actors. Each came to the audition with a prop, which were worked into the various productions. The plays ranged from humorous — like in Marge Mattioli and Jeff Siuda served up fast-paced comedy and sass that rivals top drag queens in Scott Seifritz's "No Encore" — to more introspective, such as in Megan Colombo's "National Puppet Radio," which featured Timothy Mitchum and Rick Staropoli as a father and son.

Roger Gans (also of the Geriactors) was quick with his one-liners in "Pain in the Neck," written by Craig DeLancey and directed by Nazareth College theater professor Matthew Ames, as he scolds his son, who embarked on a spiritual journey in the Himalayas after his divorce. Shawn Gray and Stephanie Roosa latched onto their nervous energy for their roles as will-they-or-won't-they lovers rehearsing a show in "A Play within a Play within a Play" by Hilary Bluestein-Lyons.  And Gretchen Woodworth and Willis Ajamu Brooks find the ridiculousness between the lines in "Powergirl's Flying Crisis," written by Justin Rielly of Aspie Works (he has two other shows in Fringe: "When Shakespeare's Ladies Meet" and "Human Politics") and directed by Freyda Schneider of EstroFest.

Not every show was a hit, but each is a testament to the sheer amount of theatrical talent we have in this town.

The 24-Hour Plays is over for this year's Fringe.