“In February of 1983, I met this incredible British documentary filmmaker….”

These are the opening words of “Swimming to Cambodia,” the best-known work of actor and writer Spalding Gray, who took his life when he jumped into New York Harbor on a frigid night in January 2004.

But there he was in spirit, in Rochester, on an evening in July at the Multi-use Community Cultural Center on Atlantic Avenue, where Justin Rielly was breathing life into Gray and his work.

It was not the first time, and it likely won’t be the last. There is a kinship between Rielly and Gray, who never met in life, but have a bond through Gray’s widow and what she describes as their shared struggle to find their place in the world.

Rielly, a 37-year-old actor, writer, director, and producer, creates theater through his one-man company he calls Aspie Works. In August, he was in rehearsals for “Ghost Story,” a play by British playwright Mark Ravenhill that Rielly is directing for performances at the KeyBank Rochester Fringe Festival this month.

Aspie Works is a reference to Asperger’s Syndrome. Rielly was diagnosed with it when he was about 23 years old, although the medical profession has since reclassified Asperger’s from a separate condition to part of a broad category of autism spectrum disorders.

“It’s one of these things I discovered later in life,” he says. “But I’m glad I discovered it because, when I was a little kid, I was constantly getting bullied because I felt different from all the other kids, and I could never figure out why.”

He was indeed different from other kids. “I remember, in one instance, I could name probably all the Best Picture Academy Award winners from 1927 to a certain period in time,” he says. “I mean, that’s something that normally people wouldn’t think about.”

There are clues to his diagnosis in his behavior. Rielly admits he has to work at making eye contact with people. He’s an intense conversationalist, carefully drawing out his thoughts from deep within.

But that night at MuCCC performing “Swimming to Cambodia,” Rielly was channeling Gray and his relentless stream-of-consciousness retelling of the small acting role Gray had in the 1984 film “The Killing Fields.” The film’s setting is genocide in Cambodia, but Gray worked his role into a monologue about filmmaking and some of the edgier aspects of Cambodian culture, namely drugs. A couple of years later, Jonathan Demme turned Gray’s monologue into a film.

Throughout his performance of the sometimes powerful, sometimes nuanced, sometimes manic one-man show, Rielly rarely glanced at the script. He had memorized Gray’s entire 75-minute monologue.

Rielly knows about jumbled thoughts and finding the connections to make a point. Of his diagnosis, he says, “Some of the wires may have ended up in the wrong place, in the wrong sockets. But yet they go in and they work. So I live.” 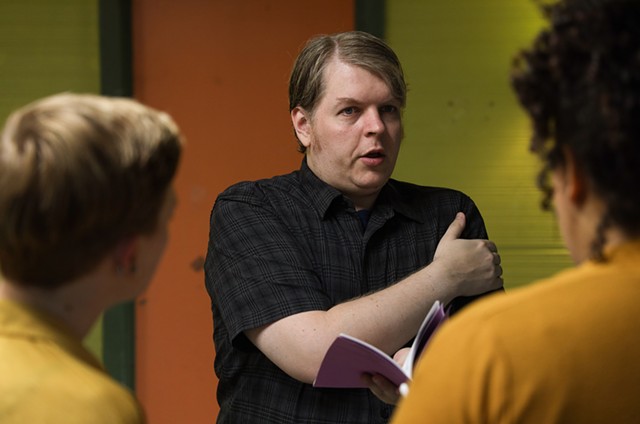 By day, Rielly works at a software company that helps businesses with their online catering menus. Nothing to see here. It is theater that is the wild card, with “so many different, jumbled elements,” he says, “that I literally have to put together in my head.”

There are limits to what he can do with Aspie Works. There is no budget for musicals or large casts. Rielly specializes in small-scale productions with minimalist sets that focus on storytelling and characters.

But the storytelling itself does not have to be minimal. “Swimming to Cambodia” opens a doorway to the history of Cambodia through the rise of the Khmer Rouge and the Cold War and expounds on themes of destroying cultural traditions to build a new society from scratch.

The script describes members of the Khmer Rouge in vivid fashion:

This weird bunch of rednecks . . . who had been educated in Paris in the strict Maoist doctrine, except someone threw a perverse little bit of Rousseau into the soup. This made for a strange bunch of bandits, hanging out in the jungle living on bark, bugs, leaves, and lizards, being trained by the Vietcong. They had a back-to-the land, racist consciousness beyond anything Hitler had ever dreamed of. But they had no scapegoat other than the city-dwellers of Phnom Penh. They were like a hundred thousand rednecks rallying in New Paltz, New York, 90 miles above the city, about to march in.

“It’s all in the delivery,” Rielly says of the script. “It’s all in making the audience be a part of the journey with you.”

Sometimes, someone has to help open that door. In the case of Rielly, it was the late John Borek, the former arts director at MuCCC. Reilly recalls Borek seeing one of Rielly’s earlier pieces and telling him, “Your work really reminded me of Spalding Gray.”

That comment prodded Rielly to contact Gray’s widow, Kathleen Russo, through the director of the old Pyramid Arts Center in the Anderson Arts Building on Goodman Street, where Russo had worked while she was a student at Rochester Institute of Technology. She granted Rielly permission to perform “Swimming to Cambodia.”

“It changed my life,” Rielly says of that correspondence. “Spalding’s work kind of gave me a new opportunity to look at really great storytelling. It was a game-changer for me.”

By the time Gray met Russo, whom he married in 1994, he had long moved on to later works. So when Russo granted Rielly permission to perform “Swimming to Cambodia,” she had never seen her husband’s breakthrough autobiographical monologue performed in its entirety — and wouldn’t until she came to Rochester to see Rielly bring it to life in 2015.

That night, Rielly walked onstage, stood in front of a music stand, opened the script, and waited for the right moment to begin speaking.

“And all I had to do is just look right at Kathy,” Rielly says. “Her facial expression was almost saying: ‘You have this.’ And, and I just went from there, and I don’t really remember looking at that script at all. I’m sure I did, but I don’t recall looking at it for long, because I was so committed to doing a good job for Kathy. And it clearly moved her.”

So moved was Russo by Rielly’s performance, that she later granted him permission to perform Gray’s “Interviewing the Audience” and “Monster in a Box.”

“I thought he did a marvelous job, really, really great,” Russo says, speaking by phone from her home in Sag Harbor, Long Island. “He’s a true scholar of Spalding Gray. He knows Spalding inside-out, yet does it his own way, his own version of it. I just appreciate the friendship that we started from six years ago, when he started to do, publicly, Spalding’s work.”

“Swimming to Cambodia” was a breakthrough for Gray and Rielly in another way, though one not evident to their audiences.

“Spalding was dyslexic,” Russo says. Dyslexia is a learning disorder that primarily affects reading skills and areas of the brain that process language.

“Not the same thing (as autism spectrum disorder), obviously, but a slow learner, and school was hard for him,” Russo says. “I’m sure Justin had his obstacles, too, so I think he relates to the struggle that Spalding had to fit into society as a slow learner.”

Rielly has performed Gray’s other works, but he keeps coming back to “Swimming to Cambodia.”

His latest performance in July was a tribute to the return of live theater after its pandemic-induced shutdown, and he opened the show with a statement of his own: “I don’t know about you, but I’ve missed this.”

The show, he said, “is dedicated to the magic of live theater. It is dedicated to moments where actors and audience can come together for a brief period of time and just have a wonderful time telling great stories, giving great performances — and making people laugh and cry — that they can just enjoy. Hopefully that magic can be right here and we get to share this together.”

With that came something else missing in the absence of theater — the first of the show’s shared curiosities, a quilt of characters, with Rielly’s delivery of Gray’s opening line:

“In February of 1983, I met this incredible British documentary filmmaker, named Roland Joffe. He was a very intense man. He was a combination of Zorro, Jesus, and Rasputin.”

Jeff Spevak is WXXI’s Arts & Life editor. He can be reached at jspevak@wxxi.org.